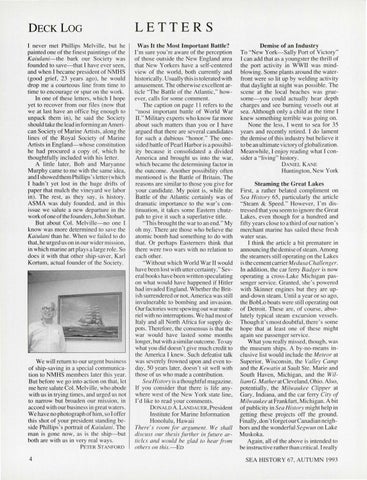 I never met Phillips Melville, but he painted one of the finest paintings of the Kaiulani- the bark our Society was founded to save-that I have ever seen, and when I became president of NMHS (good grief, 23 years ago), he would drop me a courteous line from time to time to encourage or spur on the work. In one of these letters, which I hope yet to recover from our files (now that we at last have an office big enough to unpack them in) , he said the Society should take the lead in forming an American Society of Marine Artists, along the lines of the Royal Society of Marine Artists in England-whose constitution he had procured a copy of, which he thoughtfully included with hi s letter. A little later, Bob and Maryanne Murphy came to me with the same idea, and I showed them Phillips&#39;s letter(which I hadn &#39;t yet lost in the huge drifts of paper that mulch the vineyard we labor in). The rest, as they say, is history. ASMA was duly founded, and in this issue we salute a new departure in the work of one of the founders, John Stobart. But about Col. Melville-no one I know was more determ ined to save the Kaiulani than he. When we failed to do that, he urged us on in our wider mission , in which marine art plays a large role. So does it with that other ship-saver, Karl Kortum, actual founder of the Society.

Was It the Most Important Battle? I&#39; m sure you &#39;re aware of the perception of those outside the New England area that New Yorkers have a self-centered view of the world, both currently and historically. Usually this is tolerated with amusement. The otherwise excellent article &quot;The Battle of the Atlantic,&quot; however, call s for some comment. The caption on page 11 refers to the &quot;mosl important battle of World War II.&quot; Military experts who know far more about such matters than you or I have argued that there are several candidates for such a dubious &quot; honor. &quot; The onesided battle of Pearl Harbor is a possibility because it consolidated a divided America and brought us into the war, which became the determining factor in the outcome. Another possibility often mentioned is the Battle of Britain. The reasons are similar to those you give for yo ur candidate. My point is, while the Battle of the Atlantic certainly was of dramatic importance to the war&#39;s continuation , it takes some Eastern chutzpah to give it such a superlative title. &quot;This brought the war to an end. &quot; My oh my. There are those who believe the atomic bomb had something to do with that. Or perhaps Easterners think that there were two wars with no relation to each other. &quot; Without which World War II would have been lost with utter certainty.&quot; Several books have been written specu lating on what would have happened if Hitler had invaded England. Whether the British surrendered or not, America was sti ll invulnerable to bombing and invasion. Our factories were spewi ng out war materiel with no interruptions. We had most of Italy and all North Africa for supply depots. Therefore, the consensus is that the war would have lasted some months longer, but with a similar outcome. To say what you did doesn&#39;t give much credit to the America I knew. Such defeatist talk was severely frowned upon and even today, 50 years later, doesn &#39;t sit well with those of us who made a contribution. Sea History is a thoughtful magazine. If you consider that there is life anywhere west of the New York state line, I&#39;d like to read your comments. DONALD A. LANDAUER , President Institute for Marine Information Honolulu, Hawaii

We will return to our urgent business of ship-saving in a special communication to NMHS members later thi s year. But before we go into action on that, let me here salute Col. Melville, who abode with us in trying times, and urged us not to narrow but broaden our mi ssion, in accord with our business in great waters. We have no photograph of him , so I offer this shot of your president stand ing beside Phillips&#39;s portrait of Kaiulani. The man is gone now, as is the ship-but both are with us in very real ways. PETER STANFORD

There&#39;s room for argument. We shall discuss our thesis further in future articles and would be glad to hear from others on this.-ED

Demise of an Industry To &quot;New York-Sall y Port of Victory&quot; I can add that as a youngster the thrill of the port activity in WWII was mindblowing. Some plants around the waterfront were so lit up by welding activ ity that daylight at night was possible. The scene at the local beaches was gruesome-you could actually hear depth charges and see burning vessels o ut at sea. Although only a child at the time I knew something terrible was going on. None the less, I went to sea for 35 years and recently retired. I do lament the demise of thi s industry but believe it to bean ultimate victory of globalization. Meanwhile, I enjoy reading what I consider a &quot; living&quot; hi story. DANIEL KAN E Huntington , New York

Steaming the Great Lakes First, a rather belated compliment on Sea History 65, particularly the artic le &quot;Steam &amp; Speed.&quot; However, I&#39;m distressed that you seem to ignore the Great Lakes, even though for a hundred and fifty years close to a third of our nation &#39;s merchant marine has sailed these fresh water seas. I think the article a bit premature in announcing the demise of steam. Among the steamers still operating on the Lakes is thecementcarrier Medusa Challenger. In addition , the car ferry Badger is now operating a cross-Lake Michigan passenger serv ice. Granted, she&#39;s powered with Skinner engines but they are upand-dow n steam. Until a year or so ago, the BobLo boats were still operating out of Detro it. These are, of course, absolute ly typical steam excursion vessels. Though it &#39;s most doubtful , there&#39;s some hope th at at least one of these might again see passenger service. What you really missed, though, was the museum ships. A by-no-means inclusive li st would include the Meteor at Superior, Wisconsin , the Valley Camp and the Kewatin at Sault Ste. Marie and South Haven, Michigan, and the WilliamG . Mather at Cleve land, Ohio. Also, potentially, the Milwaukee Clipper at Gary , Indiana, and the car ferry City of Milwaukee at Frankfurt, Michigan. A bit of publicity in Sea History might help in getting these projects off the ground. Fi nail y, don&#39;t forget our Canadian neighbors and the wonderful Segwun on Lake Muskoka. Again, all of the above is intended to be instructive rather than critical. I really SEA HISTORY 67, AUTUMN 1993