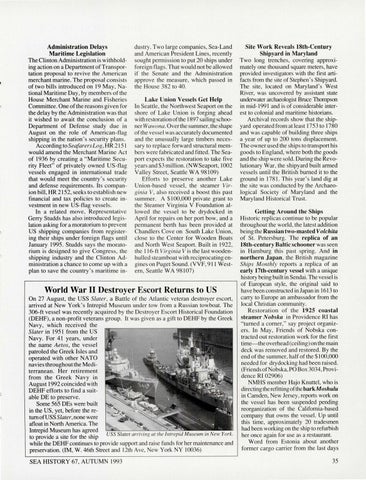 Administration Delays Maritime Legislation The Clinton Administration is withholding action on a Department of T ransportation proposal to revive the American merchant marine. The proposal consists of two bills introduced on 19 May , National Maritime Day, by members of the House Merchant Marine and Fisheries Committee. One of the reasons g iven for the delay by the Admini stration was that it wished to await the conclusion of a Department of Defense study due in August on the role of American-fl ag shipping in the nation &#39;s security plans. According to Seafarers log, HR 2 15 1 would amend the Merchant Marine Act of 1936 by creating a &quot;Maritime Security Fleet&quot; of privately owned US-flag vessels engaged in international trade that would meet the country&#39; s security and defense requirements. Its companion bill, HR 2152, seeks to establi sh new financial and tax policies to create investment in new US-flag vessels. In a related move, Representati ve Gerry Studds has also introduced legislation asking for a moratorium to prevent US shipping companies from reg istering their ships under foreign flags until January 1995. Studds says the moratorium is designed to give Congress, the shipping industry and the Clinton Administration a chance to come up with a plan to save the country&#39;s maritime in-

dustry. Two large companies, Sea-Land and American President Lines, recently sought permi ss ion to put 20 ships under foreign fl ags. That would not be allowed if the Senate and the Administration approve the meas ure, which passed in the House 382 to 40. Lake Union Vessels Get Help In Seattle, the North west Seaport on the shore of Lake Union is forging ahead with restoration of the 1897 sailing schooner Wawona. Over the summer, the shape of the vessel was accurately doc umented and the unusually large timbers necessary to replace fo rward structura l members were fa bri cated and fitted. The Seaport ex pects the restoration to take fiv e years and $3 million . (NWSeaport, 1002 Vall ey Street, Seattle WA 98 109) Efforts to preserve anothe r Lake Un ion-based vesse l, the steamer Vi rginia V, also received a boost thi s past summer. A $ I00,000 priv ate grant to the Steamer Virgini a V Foundation allowed the vesse l to be drydocked in Apri l for repairs on her port bow, and a pe1manent berth has been provided at Chandlers Cove on South Lake Union, close to the Center for Wooden Boats and North West Seaport. Built in 1922, the 11 6-ft Virginia V is the last woodenhulled steamboat with rec iprocating engines on Puget So und . (VVF, 9 11 Western , Seattle WA 98 107)

World War II Destroyer Escort Returns to US On 27 August, the USS Slater, a Battle of the Atl anti c veteran destroyer escort, arrived at New York &#39;s Intrepid Museum under tow from a Russ ian towboat. The 306-ft vessel was recently acquired by the Destroyer Escort Hi storical Foundation (DEHF), a non-profit veterans group. It was given as a gift to DEHF by the Greek Navy, which received the Slater in 1951 from the US Navy. For 41 years, under the name Aetos, the vessel patroled the Greek Isles and operated with other NATO navies throughout the Medi terranean . Her retirement from the Greek Nav y in August 1992coincided with DEHF efforts to find a suitable DE to preserve. Some 565 DEs were built in the US , yet, before the return of USS Slater, none were afloat in North America. The Intrepid Museum has agreed USS Slater arriving at the Intrepid Museum in New York. to provide a site for the ship while the DEHF continues to provide support and raise funds for her maintenance and preservation. (IM, W. 46th Street and 12th Ave, New York NY 10036) SEA HISTORY 67 , AUTUMN 1993

Site Work Reveals 18th-Century Shipyard in Maryland Two long trenches, covering approximately one thousand square meters, have provided investigators with the first artifacts from the site of Stephen&#39;s Shipyard. The site, located on Maryland &#39;s West River, was uncovered by assistant state underwater archaeologist Bruce Thompson in mid-1 99 1 and is of considerable interest to colonial and maritime historians. Archival records show that the shipyard operated from at least 1753 to 1780 and was capable of building three ships a year of up to 200 tons di spl acement. The owner used the ships to transport hi s goods to England , where both the goods and the ship were sold. During the Revoluti onary War, the shipyard built armed vessels until the British burned it to the ground in 178 1. Thi s year &#39; s land dig at the site was conducted by the Archaeological Society of Maryland and the Maryland Hi storical Trust. Getting Around the Ships Hi storic replicas continue to be popular throughout the world , the latest addition being the Russian two-masted Volchita of St. Petersburg. The replica of an 18th-century Baltic schooner was seen in Hamburg this past spring. And in northern Japan , the British magazine Ships Monthly reports a replica of an early 17th-century vessel with a unique history being built in Sendai. The vessel is of European style, the original said to have been constructed in Japan in 161 3 to carry to Europe an ambassador from the local Christian community. Res toration of th e 1925 coastal steamer Nobska in Providence RI has &quot;turned a comer,&quot; say project organizers. In May, Friends of Nobska contracted out resto ration work for the first time-the overhead (ceiling) on the main deck was removed and restored. By the end of the summer, half of the $ 100,000 needed for drydocki ng had been rai sed. (Friends ofNobska, PO Box 3034, Providence RI 02906) NMHS member Hajo Knuttel, who is directing the refitting of the barkMoshulu in Camden, New Jersey, reports work on the vessel has been suspended pending reorganization of the California-based company that owns the vessel. Up until this time, approximately 20 tradesmen had been working on the ship to refurbi sh her once again fo r use as a restaurant. Word from Estonia about another former cargo carri er fro m the last days 35