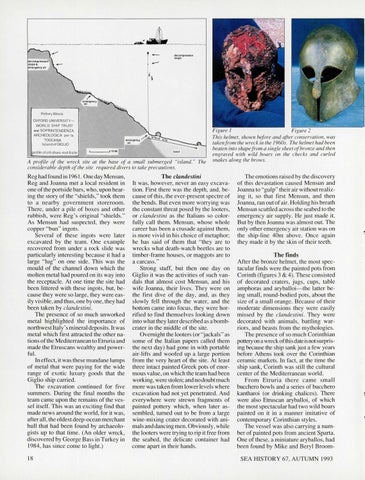 A profile of the wreck site at the base of a small submerged "island." The considerable depth of the site required divers to take precautions.

Reg had found in 1961 . One day Mensun, Reg and Joanna met a local resident in one of the portside bars, who, upon hearing the story of the "shields," took them to a nearb y government storeroom. There, under a pile of boxes and other rubbi sh, were Reg ' s original "shields." As Mensun had suspected, they were copper " bun" ingots. Several of these ingots were later excavated by the team. One example recovered from under a rock slide was particularly interesting because it had a large "lug" on one side. This was the mould of the channel down which the molten metal had poured on its way into the receptacle. At one time the site had been littered with these ingots, but, because they were so large, they were easily visible, and thus, one by one, they had been taken by clandestini. The presence of so much unworked metal highli ghted the importance of northwest Italy 's mineral deposits. Itwas metal which first attracted the other nations of the Mediterranean to Etruria and made the Etruscans wealthy and powerful. In effect, it was these mundane lumps of metal that were paying fo r the wide range of exotic luxury goods that the Giglio ship carried. The excavation continued for five summers. During the final months the team came upon the remains of the vessel itself. This was an exciting find that made news around the world , for it was, after all, the oldest deep-ocean merchant hull that had been found by archaeologists up to that time. (An older wreck , discovered by George Bass in Turkey in 1984, has since come to light.) 18

Figure I Figure 2 This helmet, shown before and ajier conservation , was takenfrom the wreck in the 1960s. The helmet had been beaten into shapeji·om a single sheet of bronze and then engraved with wild boars on the checks and curled snakes along the brows.

The clandestini It was, however, never an easy excavation. First there was the depth , and , because of thi s, the ever-present spectre of the bends. But even more worrying was the constant threat posed by the looters , or clandestini as the Italians so co lorfully call them. Mensun , whose whole career has been a crusade agai nst them, is more vivid in hi s choice of metaphor; he has said of them that "they are to wrecks what death-watch beetles are to timber-frame houses, or maggots are to a carcass." Strong stuff, but then one day on Giglio it was the activities of such vandals that almost cost Mensun , and hi s wife Joanna, their lives. They were on the first dive of the day , and , as they slowly fell through the water, and the bottom came into focus , they were horrified to find themselves looking down into what they later described as a bombcrater in the middle of the site. Overnight the looters (or "jackals" as some of the Italian papers called them the nex t day) had gone in with portable air-lifts and woofed up a large portion from the very heart of the site. At least three intact painted Greek pots of enormous value, on which the team had been working, were stolen; and no doubt much more was taken from lower levels where excavation had not yet penetrated. And everywhere were strewn fragments of painted pottery which , when later assembled, turned out to be from a large wine-mixing crater decorated with ani mals and dancing men. Obviously, while the looters were trying to rip it free from the seabed, the delicate container had come apart in their hands.

The emotions raised by the discovery of this devastation caused Mensun and Joanna to "gulp" their air without realizing it, so that first Mensun, and then Joanna, ran out of air. Holding his breath Mensun scuttled across the seabed to the emergency air supply . He just made it. But by then Joanna was almost out. The onl y other emergency air station was on the ship-line 40m above. Once again they made it by the skin of their teeth.

The find s After the bronze helmet, the most spectacular finds were the painted pots from Corinth (figures 3 & 4 ). These consisted of decorated craters, jugs, cups, table amphoras and aryballoi- the latter being small , round-bodied pots, about the size of a small orange. Because of thei r moderate dimensions they were easily missed by the clandestini. They were decorated with animals, battling warriors, and beasts from the mythologies. The presence of so much Corinthi an pottery on a wreck of this date is not surprising because the ship sank just a few years before Athens took over the Corinthian ceramic markets. In fact, at the time the ship sank, Corinth was sti ll the cultural center of the Mediterranean world. Fro m E truri a there came small bucchero bowls and a series of bucchero kantharoi (or drinking chalices). There were also Etruscan aryballoi, of which the most spectacular had two wi ld boars painted on it in a manner imitative of contemporary Corinthian styles. The vessel was also carrying a number of painted pots from ancient Sparta. One of these, a miniature aryballos, had been found by Mike and Beryl BroomSEA HISTORY 67, AUTUMN 1993

10 How the Royal Navy Beat the U-boat by Paul Quinn • 12 A View from the Bow Torpedo Room by Harry Cooper • 16 The Search for the Etruscan W...

10 How the Royal Navy Beat the U-boat by Paul Quinn • 12 A View from the Bow Torpedo Room by Harry Cooper • 16 The Search for the Etruscan W...