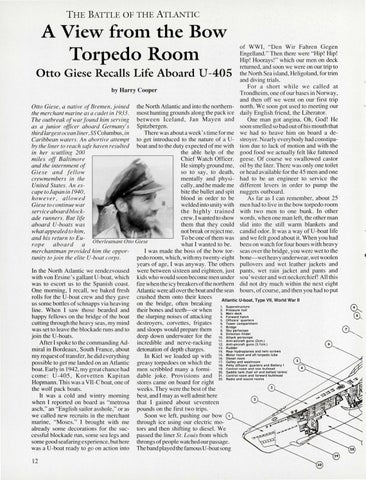 of WWI , &quot;Den Wir Fahren Gegen Engelland.&quot; Then there were &quot;Hip! Hip! Hip! Hoorays!&quot; which our men on deck returned, and soon we were on our trip to the North Sea island, Heligoland, for trim and diving trials. For a short while we ca ll e d at Trondheim, one of our bases in Norway, and then off we went on our first trip north . We soon got used to meeting our dai ly Eng lish friend, the Liberator. One man got angi na. Oh, God! He soon sme ll ed so bad out of his mouth that we had to heave him on board a destroyer. Nearly everybody had constipation due to lack of motion and with the good food we actually felt like fattened geese. Of course we swallowed castor oil by the liter. There was only one toilet or head avai labl e for the 45 men and one had to be an engineer to serv ice the different levers in order to pump the nuggets outboard. As far as I can remember, about 25 men had to live in the bow torpedo room with two men to one bunk. In other words , when one man left, the other man slid into the still warm blankets and candid odor. It was a way ofU-boat life and we felt good about it. When you had bee11on watch for four hours with heavy seas over the bridge, you were wet to the bone-wet heavy underwear, wet woolen pullovers and wet leather jackets and pants, wet rain jacket and pants and sou &#39; wester and wet neckerchief! All this did not dry much within the next eight hours, of course, and then you had to put

Otto Giese Recalls Life Aboard U-405 by Harry Cooper

Otto Giese , a native of Bremen, joined the North Atlantic and into the northernthe merchant marine as a cadet in 1933. most hunting grounds along the pack ice The outbreak of war found him serving between Iceland, Jan May e n and as a junior officer aboard Germany&#39;s Spitzbergen. There was about a week &#39;s timefor me third largest ocean liner, SS Columbus, in Caribbean waters. An abortive attempt to get introduced to the nature of a Uby the liner to reach safe haven resulted boat and to the duty expected of me with the able help of the in her scuttling 200 Chief Watch Officer. miles off Baltimore He simply ground me, and the internment of so to say, to death, Giese and fellow mentall y and physicrewmembers in the cally, and he made me United States. An esbite the bullet and spit cape to Japan in 1940, blood in order to be however , allowed welded into unity with Giese to continue war the hi g hly trained service aboard blockcrew. I wanted to show ade runners. But life them that they could aboard U-boats was not break or reject me. what appealed to him, To be one of them was and his return to EuOberlewnam 0110 Giese what I wanted to be. rope aboard a merchantman provided him the opporI was made the boss of the bow torpedo room , which, with my twenty-eight tunity to join the elite U-boat corps. years of age, I was anyway. The others In the North Atlantic we rendezvoused were between sixteen and eighteen , just with von Ersine &#39;s gallant U-boat, which kids who would soon become men under was to escort us to the Spanish coast. fire when the icy breakers of the northern One morning, I recall , we baked fresh Atlantic were al I over the boat and the seas rolls for the U-boat crew and they gave crushed them onto their knees Atlantic U-boat, Type VII, World War II us some bottles of schnapps via heaving On the bridge, Often breaking 1. Superstructure 2. Pressure hull line. When I saw those bearded and their bones and teeth--or when 3. Main deck 4. Forward hatch happy fellows on the bridge of the boat the Slurping nOiSeS Of attacking ~: ~!~~~r~~~~&quot;..&#39;:~~~nt cutting through the heavy seas, my mind destroyers, corvettes , frigates was set to leave the blockade runs and to and sloops would prepare them ~: ~~~~:riscope join the U-boats. deep down underwater for the ,g: ~:;:~~ P:::~~~~. After I spoke to the commanding Ad- incredible and nerve-racking ~~: :~:::::~~~:~: ~~~~ ~~~7~~.) miral in Bordeaux, South France, about detonation of depth charges. ~~: ~~=~~~droplanes and twin screws In Kiel we loaded up with ~~: ~;~~;i&#39;r~~&#39;;;, and aft torpedo tube my request of transfer, he did everything possible to get me landed on an Atlantic greasy torpedoes 00 Which the ~~: ~::!?o~t7:e~s~sqh~:~~s and Battery I boat. Early in 1942, my great chance had men scribbled many a formi - ~~: ~~~~~~ 1 1 ~~~(1 ~;~ :i~a;n~u~~~,~~t tank s) come: U-405, Korvetten Kapitan dable joke. Provision s and ~~: ~~~~~o!~~os~u&quot;nnddr::&#39;or;:rd bulkhead Hopmann . Thi s was a VII-C boat, one of stores came on board for eight the wolf pack boats. weeks. They were the best of the It was a cold and wintry morning best, and I may as well admit here when I reported on board as &quot; metrosa that I gained about seventeen asch,&quot; an &quot;Engl ish sai lor ass hole,&quot; or as pounds on the first two trips. Soon we left, pushing our bow we called new recruits in the merchant marine, &quot; Moses. &quot; I brought with me through ice using our electric moalready some decorations for the suc- tors and then shifting to diesel. We cessful blockade run , some sea legs and passed the liner St. Louis from which some good seafaring experience, bu there throngs of people watched our passage. was a U-boat ready to go on action into The band played the famous U-boatsong 0