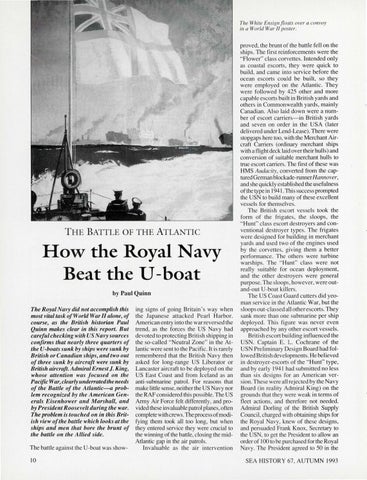 How- the Royal Navy Beat the U -boat by Paul Quinn

The Royal Navy dUI not accomplish this most vital task of World War II alone, of course, as the British historian Paul Quinn makes clear in this report. But care/ul checking with USN avy sources confirms that nearly three quarters of the U-boats sunk by ships were sunk by British or Canadian ships, and two out of three sunk by aircraft were sunk by British aircraft. A dmiral Ernest J. King, whose attention was focu sed on the Pacific War, clearly underrated the needs of the Battle of the A tlantic-a problem recognized by the A merican Generals Eisenhower and Marshall, and by President Roosevelt during the war. The problem is touched on in this British view of the battle which Looks at the ships and men that bore the brunt of the battle on the A llied side. The battle aga inst the U- boat was showIO

ing signs of going Britain &#39; s way when the Japanese attacked Pearl Harbor. American entry into the war reversed the trend, as the fo rces the US Navy had devoted to protecting British shipping in the so-called &quot;Neutral Zone&quot; in the Atlantic were sent to the Pac ific. It is rarely remembered that the British Navy then as ked for long-range US Liberator or Lancaster aircraft to be deployed on the US East Coast and fro m Iceland as an anti-submarine patrol. For reasons that make little sense, neither the US Navy nor the RAF considered this possible. The US Army Air Force felt differe ntly, and provided these invaluable patrol planes, often complete with crews. The process of modifying them took all too long, but when they entered service they were crucial to the winning of the battle, closing the midAtlantic gap in the air patrols. Invaluabl e as the air intervention

proved, the brunt of the battle fell on the ships. T he first reinforce ments were the &quot; Flower&quot; class corvettes. Intended only as coastal escorts, they were quick to build , and came into service before the ocean escorts could be built, so they were empl oyed on the Atlantic. They were fo llowed by 425 other and more capable escorts bu ilt in British yards and others in Commonwealth yards, mainly Canadi an. Also laid down were a number of escort carriers-in British yards and seven on order in the USA (later deli vered under Lend-Lease). There were stopgaps here too, with the Merchant Aircraft Carriers (ordinary merchant ships with a fli ght deck laid overtheir hull s) and conversion of suitable merchant hulls to true escort carriers. The first of these was HMS Audacity, converted from the captured German blockade-runner Hannover, and she quickly established the usefulness of the type in 1941 . This success prompted the USN to build many of these excellent vessels fo r themselves. The British escort vessels took the fo rm of the friga tes , the sloops, the &quot; Hunt&quot; class escort destroyers and conventional destroyer types. The fri gates were designed fo r building in merchant yards and used two of the engines used by the corvettes, giving them a better performance. The others were turbine warships. The &quot; Hun t&quot; cl ass were not really suitable fo r ocean deployment, and the other destroyers were general purpose. The sloops, however, were outand-o ut U-boat killers. T he US Coast Guard cutters did yeoman service in the Atl antic War, but the sloops out-classed alI other escorts. They sank mo re than one submarine per ship deployed. This fig ure was never even approached by any other escort vessels. British escort bu ilding influenced the USN . Captain E. L. Cochrane of the USN Preliminary Des ign Board had followed British developments. He be lieved in destroyer-escorts of the &quot; Hunt&quot; type, and by early 194 1 had submitted no less than six designs fo r an American version. T hese were a ll rejected by the Navy Board (in reality Adm iral King) on the grounds that they were weak in terms of fleet actions, and therefore not needed. Admiral Darl ing of the British Supply Council, charged with obtaining ships for the Royal Navy, knew of these designs, and persuaded Frank Knox , Secretary to the USN, to get the President to allow an order of I 00 to be purchased for the Royal Navy. The President agreed to 50 in the SEA HISTORY 67, AUTUMN 1993