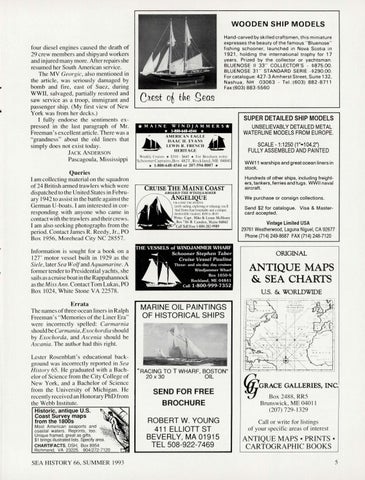 WOODEN SHIP MODELS four diesel engines caused the death of 29 crew members and shipyard workers and injured many more. After repairs she resumed her South American service. The MY Georgie, also menti oned in the article, was seriously damaged by bomb and fire, east of Suez, during WWII, salvaged, partially restored and saw service as a troop, immigrant and passenger ship. (My first view of New York was from her decks.) I full y endorse the sentiments expressed in the last paragraph of Mr. Freeman &#39;s excellent articl e. There was a &quot;grandness&quot; about the old liners that simply does not ex ist today .

Queries I am collecting material on the squadro n of 24 British armed tra wlers which were di spatched to the United States in February 1942 to assist in the battle against the German U- boats. l am interested in corresponding with anyone who came in contact with the traw lers and their crews. I am also seeking photographs fro m the peri od. Contact James R. Reedy, Jr., PO Box 1956, Morehead C ity NC 28557.

We purchase or consign collections.

Informati on is sought fo r a book on a 127&#39; motor vessel built in 1929 as the Siele, later Sea Wolf and Aquamarine. A fo rmer tender to Presidenti al yachts, she sails as a cruise boat in the Rappahannock as the Miss Ann. Contact Tom Lukas, PO Box 1024, White Stone VA 22578.

The names of three ocean liners in Ralph Freeman&#39; s &quot; Memories of the Liner Era&quot; were incorrectl y spe ll ed : Carmarnia should be Carmania, Exochordia should by Exochorda, and Ascenia should be Ascania. The authur had thi s ri ght.