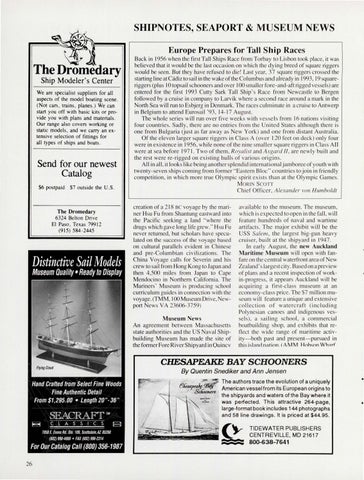 The Dromedary Ship Modeler's Center We are specialist suppliers for all aspects of the model boating scene . (Not cars, trains , planes.) We can start you off with basic kits or provide you with plans and materials. Our range also covers working or static models, and we carry an extensive selection of fittings for all types of ships and boats.

Europe Prepares for Tall Ship Races Back in 1956 whe n the first Tall Sh ips Race from Torbay to Lisbon took place, it was believed that it wo uld be the last occasion o n which the dying breed of square riggers wo uld be seen. But they have refused to die! Last year, 37 square riggers crossed the starting line at Cadiz to sail in the wake of the Columbus and a lready in 1993, 19 squareriggers (plus 10 topsail schoone rs and over 100 smaller fore-and-aft rigged vessels) are ente red for the first 1993 Cutty Sark Tall Ship 's Race from ewcastle to Bergen fo llowed by a crui se in company to Larvik where a second race around a mark in the North Sea wi ll run to Esbjerg in De nmark. The races cu lminate in a cruise to Antwerp in Belgium to attend Eurosail ' 93, 14-17 August. The who le seri es w ill run over fi ve weeks w ith vesse ls fro m 16 nations visiting fo ur co untri es. Sad ly, there are no e ntri es from the Un ited States altho ugh there is o ne from Bul ga ri a (j ust as far away as New York) and one from d istant Aus tra li a. Of the e leven larger square riggers in C lass ·A (over 120 feet o n deck) onl y fo ur were in ex iste nce in 1956, while none of the nine sma ll e r sq uare ri ggers in C lass All we re at sea before 197 1. T wo of the m, Roya/isl and Asgard II , a re new ly buil t a nd the rest were re-rigged on ex isting hull s of vario us orig in s. A ll in all , it looks like be ing ano the r splendid international jamboree of yo uth with twe nty-seven ships coming from fo1mer " Eastern Bloc" countries to joi n in friendly competition , in whic h more true Olympic spirit exi sts than at the Olympic Games. MORI Scon Ch ief Officer, Alexander van Humboldt creation of a 2 18 BC voyage by the marine r Hsu Fu from Shantung eastward into the Pacific seek ing a land "whe re the drugs which gave long life grew." Hsu Fu never returned, but scholars have speculated on the success of the voyage based o n cu ltural parallels ev ident in Ch inese a nd pre-Col umbi an civilizations. The China Voyage call s for Severin and his crew to saiI from Hong Kong to Japan and then 4,500 miles from Japan to Cape Mendocino in Northern Cali fornia. The Mariners ' Museum is producing school curric ulum g uides in connection wi th the voyage. (TMM, I00 Museum Dri ve, ewport News VA 23606-3759) Museum News An agreement be tween Massachusetts state authorities and the US Nava l Shipbuilding Museum has made the site of the former Fore Ri ver Shipyard in Ouincv

available to the museum. The muse um , which is ex pected to open in the fa ll , wi ll feat ure hundreds of naval and warti me art ifacts . The m ajor ex hibit will be the USS Salem, the larges t bi g-g un heavy c rui ser, built a t the shipyard in 1947. In early August, the new Auckland Maritime M u seum will open with fanfare on the centra l waterfront area of ew Zealand ' s largest city. Based on a preview of plans and a recent inspection of workin-progress, it appears Auckland wi ll be acquiring a first-cla ss museum at a n economy-class price. The $7 million museum will feature a unique and extensive co ll ec tion of watercraft ( in c ludin g Polynesian canoes and indigenous vessels) , a sa iling schoo l, a com merc ial boatbuilding s hop, and ex hibits that reflect the wide range of maritime activity-both past and present-pursued in this isl;mrl rn1tinn . (A MM Hnhsnn Wh ::irf

~; The authors trace the evolution of a uniquely

the shipyards and waters of the Bay where 1t was perfected. This attractive 264-page , large-format book includes 144 photographs

8 The Battle of the Atlantic by Jerry Roberts and Larry Sowinski • 20 The Search for the Longitude and the Prime Meridian by Donald Johnson...

8 The Battle of the Atlantic by Jerry Roberts and Larry Sowinski • 20 The Search for the Longitude and the Prime Meridian by Donald Johnson...