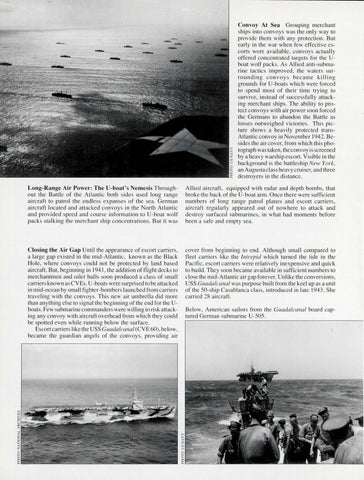 Convoy At Sea G rouping merchant ships into convoys was the onl y way to provide them with any pro tecti on. But earl y in the war when fe w effective escorts we re avail able, convoys actuall y offered concentrated targets fo r the Uboat wolf packs. As Allied anti-submarine tacti cs improved, the waters surroundin g co nvoys became killin g grounds fo r U-boats which were fo rced to spend most of their time trying to survi ve, in stead of successfull y attacking merchant ships. The ability to protect convoys with air power soon fo rced the Germans to abandon the Battle as losses outweighed victori es. Thi s pi cture shows a heav il y protected transAtlantic convoy in November 1942. Besides the a ir cover, fro m which thi s photograph was taken, the convoy is screened by a heavy wa rship escort. Vi sible in the bac kground is the battleship New York, an A ugusta class heavy crui ser, and three destroyers in the d istance. Long-Range Air Power: The U-boat &#39;s Nemesis Throughout the Battl e of the Atl antic both sides used long range a ircraft to patrol the endless ex panses of the sea. German a ircraft located and attacked convoys in the North Atlantic and prov ided speed and co urse information to U- boat wolf packs stalking the merchant ship concentrations. But it was

Alli ed aircraft, equipped with radar and de pth bombs, that broke the bac k of the U-boat arm. Once th ere were suffic ient numbers of long range patrol pl anes and escort carriers, a ircraft regul arl y appeared out of nowhere to attac k and destroy surfaced s ubmarines, in wh at had moments before been a safe and empty sea.

C losing the Air Gap Until the appearance of escort carriers , a large gap ex isted in the mid-Atl anti c, known as the Bl ack Ho le , where convoys could not be protected by land based a ircraft. But, beginning in 1941 , the addition offli ght decks to merchantmen and o iler hull s soon produced a class of small carri ers known as CYEs. U- boats were surpri sed to be attacked in mid-ocean by small fi ghter-bombers launched from carri ers trave ling with the convoys . Thi s new air umbrella did more than anything e lse to signal the beginning of the end for the Uboats. Few submarine commanders were willing to ri sk attac king any convoy with aircraft overhead from which they could be spotted even whil e running be low the surface. Escort carriers 1ike the USS Guadalcanal (CVE 60), below, became the guardi an angels of the convoys, prov iding a ir

cover fro m beginning to end . A lthough small compared to fl eet carri ers li ke the Intrepid which turned the tide in the Pac ifi c, escort carriers were relati vely inex pensive and quick to build. They soon became avail abl e in suffic ient numbers to cl ose the mid-Atlantic air gap fo rever. U nlike the conversions, USS Guadalcanal was purpose built from the keel up as a unit of the 50-ship Casabl anca class, introduced in late 194 3. She carried 28 aircraft. Below, American sail ors from the Guadalcanal board captured German submarine U-505.