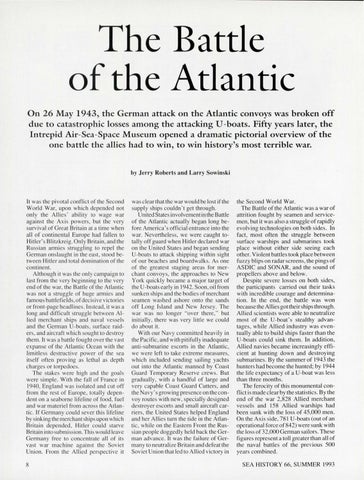 The Battle of the Atlantic On 26 May 1943, the German attack on the Atlantic convoys was broken off due to catastrophic losses among the attacking U-boats. Fifty years later, the Intrepid Air-Sea-Space Museum opened a dramatic pictorial overview of the one battle the allies had to win, to win history&#39;s most terrible war.

by Jerry Roberts and Larry Sowinski

It was the pivotal conflict of the Second World War, upon which depended not on ly the Allies&#39; ability to wage war against the Axis powers, but the very surviva l of Great Britain at a time when all of continental Europe had fa llen to Hitler &#39;s Blitzkreig. Only Britain, and the Ru ss ian armies strugg ling to repel the Gern1an ons laught in the east, stood between Hitler and total domination of the continent. Alth ough it was the only campaign to last from the very beg inning to the very end of the war, the Battle of the Atlantic was not a struggle of huge armies and famous battlefields, of decisive victories or front-page headlines. Instead, it was a long and difficult struggle between Allied merchant ships and naval vessels and the German U-boats , surface raiders, and aircraft which sought to destroy them . It was a battle fought over the vast expanse of the Atlantic Ocean with the limitless destructive power of the sea itse lf often proving as lethal as depth charges or torpedoes. The stakes were high and the goals were simple. With the fall of France in 1940, England was isolated and cut off from the rest of Europe, totally dependent on a seaborne lifeline of food, fuel and war materiel from across the Atlanti c. If Germany cou ld sever thi s lifeline by sinking the merchant ships upon which Brita in depended , Hitler could starve Britain into submission. This would leave Germany free to concentrate all of its vast war machine against the Soviet Union. From the Allied perspective it

was clearthat the war would be lost ifthe supply sh ips couldn &#39;t get through. United States involvement in the Battle of the Atlantic actually began long before America &#39;s official entrance into the war. Nevertheless, we were caught totally off guard when Hitler declared war on the Un ited States and began sendi ng U-boats to attack shippi ng within sight of our beaches and boardwalks. As one of the greatest staging areas for merchant convoys, the approaches to New York quickly became a major target of the U-boats early in 1942. Soon, oil from sunken ships and the bodies of merchant seamen washed as hore onto the sands off Long Island and New Jersey. The war was no longer &quot;over there,&quot; but initially , there was very little we cou ld do about it. With our Navy comm itted heavily in the Pacific, and with pitifully inadeq uate anti-submarine escorts in the Atlantic, we were left to take extreme measures , which included sending sai ling yachts out into the Atlantic manned by Coast Guard Temporary Reserve crews. But grad ually , with a handful of large and very capab le Coast Guard Cutters, and the Navy&#39;s grow ing presence on the convoy routes with new, spec ially des igned destroyer escorts and sma ll aircraft carriers, the Un ited States he lped England and her A llies turn the tide in the Atlantic, whi le on the Eastern Front the Ru ssian peop le doggedly held back the German advance. It was the fa ilure of Germany to neutralize Britain and defeat the Soviet Union that led to Alli ed victory in

the Second World War. The Battle of the Atlantic was a war of attrition fought by seamen and servicemen, but it was also a struggle of rapidly evolving technolog ies on both sides. In fact, most often the struggle between surface warships and submarines took place without e ither side seeing each other. Vio lent battles took place between fuzzy blips on radar screens, the pings of ASDIC and SONAR, and the sound of propellers above and below. Despite severe losses on both sides, the participants carried out their tasks with incred ibl e courage and determination. In the end , the battle was won because the Allies got their ships through. Allied scienti sts were able to neutralize most of the U-boat&#39;s stealthy advantages, while Allied indu stry was eventuall y able to build ships faster than the U-boats could sink them . In addition, Allied navies became increasingly efficient at hunting down and destroying submarines. By the summer of 1943 the hunters had become the hunted; by I 944 the life ex pectancy of a U-boat was less than three months. The ferocity of this monumental conflict is made clear by the statistics.By the end of the war 2,828 Allied merchant vessels and 158 Allied warships had been sunk with the loss of 45 ,000 men . On the Axis side, 781 U-boats (out of an operational force of 842) were sunk with the loss of32,000 German sailors. These figures represent a toll greaterthan all of the nava l battles of the previous 500 years combined. SEA HISTORY 66, SUMMER 1993