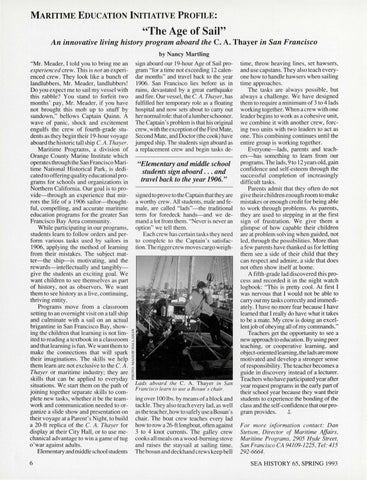 &quot;The Age of Sail&quot; An innovative living history program aboard the C. A. Thayer in San Francisco by Nancy Martling &quot;Mr. Meader, I told you to bring me an sign aboard our 19-hour Age of Sail proexperienced crew. This is not an experi- gram &quot;for a time not exceeding 12 calenenced crew. They look like a bunch of dar months&quot; and travel back to the year landlubbers, Mr. Meader, landlubbers! 1906. San Francisco lies before us in Do you expect me to sail my vessel with ruins, devastated by a great earthquake this rabble? You stand to forfeit two and fire. Our vessel , the C. A. Thayer, has months&#39; pay, Mr. Meader, if you have fulfilled her temporary role as a floating not brought thi s mob up to snuff by hospital and now sets about to carry out sundown,&quot; bellows Captain Quinn. A her normal role: that of a lumber schooner. wave of panic, shock and excitement The Captain&#39;s problem is that his original engulfs the crew of fourth-grade stu- crew, with the exception of the First Mate, dents as they begin their 19-hour voyage Second Mate, and Doctor (the cook) have aboard the historic tall ship C. A. Thayer. jumped ship. The students sign aboard as Maritime Programs, a division of a replacement crew and begin tasks deOrange County Marine Institute which operates through the San Francisco Mari&quot;Elementary and middle school time National Historical Park, is dedistudents sign aboard ... and cated to offering quality educational protravel back to the year 1906.&quot; grams for schools and organizations in Northern California. Our goal is to provide-through an experience that mir- signed to prove to the Captain that they are rors the life of a 1906 sailor-thought- a worthy crew. All students, male and feful , compelling, and accurate maritime male, are called &quot;lads&quot;-the traditional education programs for the greater San term for foredeck hands-and we deFrancisco Bay Area community. mand a lot from them. &quot;Never is never an While participating in our programs, option&quot; we tell them . students learn to follow orders and perEach crew has certain tasks they need form various tasks used by sailors in to complete to the Captain &#39;s sati sfac1906, applying the method of learning tion . The rigger crew moves cargo weighfrom their mistakes. The subject matter-the ship--is motivating, and the rewards-intellectually and tangiblygive the students an exciting goal. We want children to see themselves as part of history , not as observers. We want them to see history as a live, continuing, thriving entity. Programs move from a classroom setting to an overnight visit on a tall ship and culminate with a sail on an actual brigantine in San Francisco Bay, show- z ing the children that learning is not Jim- ~ ited to reading a textbook in a classroom j and that learning is fun . We want them to ~ make the connections that will spark !!! their imaginations. The skill s we help 8 &lt; them learn are not exclusive to the C. A. :E Thayer or maritime industry; they are ~ skills that can be applied to everyday iE · · w h h h f Lads aboard the C. A. Thayer in San situations. e start t em on t e pat Francisco learn to use a Bosun&#39; s chair. joining together separate skills to complete new tasks, whether it be the team- ing over 100 lbs. by means of a block and work and communication needed to or- tackle. They also teach every lad , as well ganize a slide show and presentation on as the teacher, how to safely usea Bosun &#39;s their voyage at a Parent&#39; s Night, to build chair. The boat crew teaches every lad a 20-ft replica of the C. A. Thayer for how to row a 26-ft longboat, often against display at their City Hall, or to use me- 3 to 4 knot currents. The galley crew chanical advantage to win a game of tug cooks all meals on a wood-burning stove o&#39;war against adu lts. and raises the staysail at sailing time. Elementary and middle school students The bosun and deckhand crews keep bell

time, throw heaving lines, set hawsers, and use capstans. They also teach everyone how to handle hawsers when sailing time approaches. The tasks are always possible, but always a challenge. We have designed them to require a minimum of 3 to 4 lads working together. When a crew with one leader begins to work as a cohesive unit, we combine it with another crew, forcing two units with two leaders to act as one. This combining continues until the entire group is working together. Everyone-lads, parents and teachers-has something to learn from our programs. The lads, 9 to 12 years old, gain confidence and self-esteem through the successful completion of increasingly difficult tasks . Parents admit that they often do not give their ch ildren enough room to make mistakes or enough credit for being able to work through problems. As parents, they are used to stepping in at the first sign of frustration. We give them a glimpse of how capable their children are at problem solving when guided, not led , through the possibilities. More than a few parents have thanked us for letting them see a side of their child that they can respect and admire, a side that does not often show itself at home. A fifth-grade lad discovered this process and recorded it in the night watch logbook: &quot;This is pretty cool. At first I was nervous that I would not be able to carry out my tasks correctly and immediate! y. I have no more fear because I have learned that I really do have what it takes to be a mate. My crew is doing an excellent job of obeying all of my commands.&quot; Teachers get the opportunity to see a new approach to education. By using peer teaching, or cooperative learning, and object-oriented learning, the lads are more motivated and develop a stronger sense ofresponsibility. The teacher becomes a guide in discovery instead of a lecturer. Teachers who have participated year after year request programs in the early part of their school year because they want their students to experience the bonding of the class and the self-confidence that our program provides. ,!,