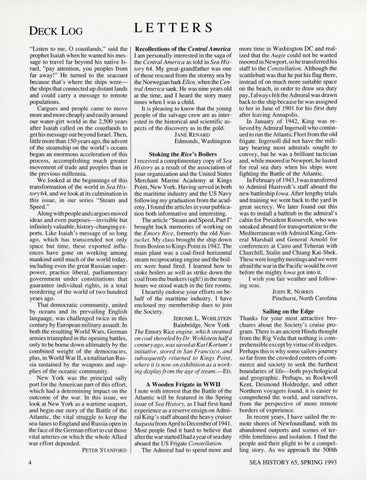 DECK LOG &quot;Listen to me, 0 coastlands,&quot; said the prophet Isaiah when he wanted his message to travel far beyond his native Israel, &quot;pay attention, you peoples from far away!&quot; He turned to the seacoast because that&#39;s where the ships werethe ships that connected up distant lands and could carry a message to remote populations. Cargoes and people came to move more and more cheaply and easily around our water-girt world in the 2,500 years after Isaiah called on the coastlands to get his message out beyond Israel. Then, little more than 150 years ago, the advent of the steamship on the world&#39;s oceans began an enormous acceleration of this process, accomplishing much greater movement of trade and peoples than in the previous millennia. We looked at the beginnings of this transformation of the world in Sea History 64, and we look at its culmination in this issue, in our series &quot;Steam and Speed.&quot; Along with people and cargoes moved ideas and even purposes-invisible but infinitely valuable, history-changing exports. Like Isaiah&#39;s message of so long ago, which has transcended not only space but time, these exported influences have gone on working among mankind until much of the world today, including even the great Russian superpower, practice liberal, parliamentary government under constitutions that guarantee individual rights, in a total reordering of the world of two hundred years ago. That democratic community, united by oceans and its prevailing English language, was challenged twice in this century by European military assault. In both the resulting World Wars, German armies triumphed in the opening battles, only to be borne down ultimately by the combined weight of the democracies, plus, in World War II, a totalitarian Russia sustained by the weapons and supplies of the oceanic community. New York was the principal sally port for the American part of this effort, which had a determining impact on the outcome of the war. In this issue, we look at New York as a wartime seaport, and begin our story of the Battle of the Atlantic, the vital struggle to keep the sea-lanes to England and Russia open in the face of the German effort to cut those vital arteries on which the whole Allied war effort depended. PETER STANFORD

Stoking the Rice&#39;s Boilers I received a complimentary copy of Sea History as a result of the association of your organization and the United States Merchant Marine Academy at Kings Point, New York. Having served in both the maritime industry and the US Navy following my graduation from the academy, I found the articles in your publication both informative and interesting. The article &quot;Steam and Speed, Part I&quot; brought back memories of working on the Emory Rice, formerly the old Nantucket. My class brought the ship down from Boston to Kings Point in 1942. The main plant was a coal-fired horizontal steam reciprocating engine and the boilers were hand fired. I learned how to stoke boilers as well as strike down the coal from the bunkers (ugh!) in the many hours we stood watch in the fire rooms. I heartily endorse your efforts on behalf of the maritime industry. I have enclosed my membership dues to join the Society. JEROME L. WOHLSTEIN Bainbridge, New York The Emory Rice engine, which steamed on coal shoveled by Dr. Wohlstein half a century ago, was saved at Karl Kortum&#39; s initiative, stored in San Francisco , and subsequently returned to Kings Point, where it is now on exhibition as a working display from the age of steam.-ED. A Wooden Frigate in WWII I note with interest that the Battle of the Atlantic will be featured in the Spring issue of Sea History, as I had first-hand experience as a reserve ensign on Admiral King&#39;s staff aboard the heavy cruiser Augusta from April to Decemberof 1941. Most people find it hard to believe that afterthe war started I had a year of sea duty aboard the US Frigate Constellation. The Admiral had to spend more and

more time in Washington DC and realized that the Augie could not be wasted moored in Newport, so he transferred his staff to the Constellation. Although the scuttlebutt was that he put his flag there, instead of on much more suitable space on the beach, in order to draw sea duty pay, I always felt the Admiral was drawn back to the ship because he was assigned to her in June of 1901 for his first duty after leaving Annapolis. In January of 1942, King was relieved by Admiral Ingersoll who continued to run the Atlantic Fleet from the old frigate. Ingersoll did not have the military bearing most admirals sought to convey, but he was a brilliant tactician and, while moored in Newport, he lusted for real sea duty when his ships were fighting the Battle of the Atlantic. In February of 1943, I was transferred to Admiral Hustvedt&#39;s staff aboard the new battleship Iowa . After lengthy trials and training we went back to the yard in great secrecy. We later fo und out this was to install a bathtub in the admiral &#39;s cabin for President Roosevelt, who was sneaked aboard for transportation to the Mediterranean with Admiral King, General Marshall and General Arnold for conferences at Cairo and Teheran with Churchill, Stalin and Chiang Kai-Shek. These were lengthy meetings and we were afraid the war in the Pacific would be over before the mighty Iowa got into it. I wish you fair weather and following seas. JOHN R. NORRIS Pinehurst, North Carolina

Sailing on the Edge Thanks for your most attractive brochures about the Society&#39;s cruise program. There is an ancient Hindu thought from the Rig Veda that nothing is comprehensible except by virtue of its edges. Perhaps this is why some sailors journey so far from the crowded centers of commerce and society to seek the furthest boundaries of life-both psychological and geographic. Perhaps, as Rockwell Kent, Desmond Holdredge, and other Northern voyagers found, it is easier to comprehend the world, and ourselves, from the perspective of more remote borders of experience. In recent years, I have sailed the remote shores of Newfoundland, with its abandoned outports and scenes of terrible loneliness and isolation. I find the people and their plight to be a compelling story. As we approach the 500th SEA HISTORY 65 , SPRING 1993