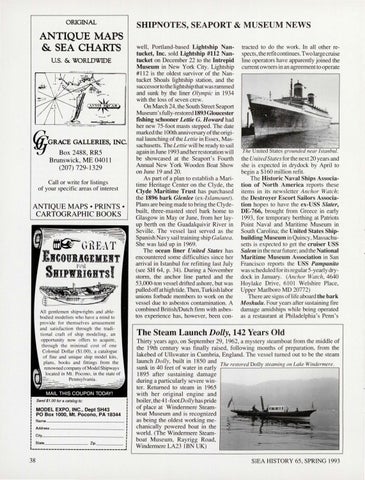 All gentlemen shipwrights and ablebodied modelists who have a mind to provide for themselves amusement and sat isfaction through the traditional craft of ship modeling, an opportunity now offers to acquire , through the minimal cost of o ne Colonial Dollar ($1.00), a catalogue of fine and unique ship model kits, plans, books and fittings from the renowned company of Model Shipways located in Mt. Pocono, in the state of Pennsylvania .

SHIPNOTES, SEAPORT & MUSEUM NEWS well, Portland-based Lightship Nantucket, Inc. sold Lightship #112 Nantucket on December 22 to the Intrepid Museum in New York City. Lightship #112 is the oldest survivor of the Nantucket Shoals lightship station, and the successorto the lightship that was rarrimed and sunk by the liner Olympic in 1934 with the loss of seven crew. On March 24, the South Street Seaport Museum 's fully-restored 1893 Gloucester fishing schooner Lettie G. Howard had her new 75-foot masts stepped. The date marked the 1OOth anniversary of the original launching of the Lettie in Essex, Massachusetts. The Lettie will be ready to sail again in June 1993 and her restoration wil 1 be showcased at the Seaport's Fourth Annual New York Wooden Boat Show on June 19 and 20. As part of a plan to establish a Maritime Heritage Center on the Clyde, the Clyde Maritime Trust has purchased the 1896 bark Glenlee (ex-ls/amount). Plans are being made to bring the Clydebuilt, three-masted steel bark home to Glasgow in May or June, from her layup berth on the Guadalquivir River in Seville. The vessel last served as the Spanish Navy sail training ship Galatea. She was laid up in 1969. The ocean liner United States has encountered some difficulties since her arrival in Istanbul for refitting last July (see SH 64, p. 34). During a November storm, the anchor line parted and the 53,000-ton vessel drifted ashore, but was pulled off at high tide. Then, Turkish labor unions forbade members to work on the vessel due to asbestos contamination. A combined British/Dutch firm with asbestos experience has, however, been con-

tracted to do the work. In all other respects, the refit continues. Two large cruise line operators have apparently joined the current owners in an agreement to operate

. . The United States grounded near Istanbul. the UnitedStatesforthe next 20 years and she is expected in drydock by April to begin a $160 million refit. The Historic Naval Ships Association of North America reports these items in its newsletter Anchor Watch: the Destroyer Escort Sailors Association hopes to have the ex-USS Slater, DE-766, brought from Greece in early 1993, for temporary berthing at Patriots Point Naval and Maritime Museum in South Carolina; the United States Shipbuilding Museum in Quincy, Massachusetts is expected to get the cruiser USS Salem in the near future; and the National Maritime Museum Association in San Francisco reports the USS Pampanito was scheduled for its regular 5-yearly drydock in January. (Anchor Watch, 4640 Hoylake Drive, 6101 Welshire Place, Upper Marlboro MD 20772) There are signs of life aboard the bark Moshulu . Four years after sustaining fire damage amidships while being operated as a restaurant at Philadelphia's Penn 's

The Steam Launch Dolly, 142 Years Old Thirty years ago, on September 29, 1962, a mystery steamboat from the middle of the 19th century was finally raised, following months of preparation, from the lakebed of Ullswater in Cumbria, England. The vessel turned out to be the steam launch Dolly, built in l850 and The restored Dolly steaming on Lake Windermere. sunk in 40 feet of water in early 1895 after sustaining damage during a particularly severe winter. Returned to steam in 1965 with her original engine and boiler, the41-footDolly has pride of place at Windermere Steamboat Museum and is recognized as being the oldest working mechanically powered boat in the world. (The Windermere Steamboat Museum , Rayrigg Road, Windermere LA23 IBN UK) SJEA HISTORY 65, SPRING 1993