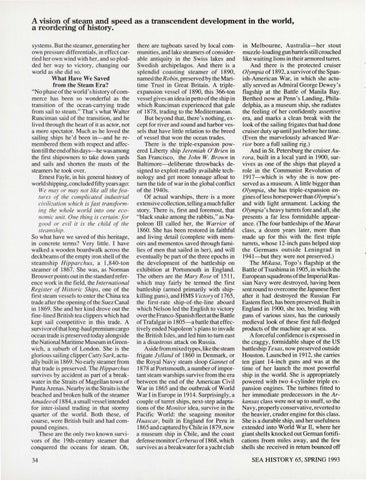 A vision of steam and speed as a transcendent development in the world, a reordering of history. systems. But the steamer, generating her own pressure differentials, in effect carried her own wind with her, and so plodded her way to victory, changing our world as she did so. What Have We Saved from the Steam Era? &quot;No phase of the world &#39;s history of commerce has been so wonderful as the transition of the ocean-carrying trade from sail to steam.&quot; That&#39;s what Walter Runciman said of the transition, and he lived through the heart of it as actor, not a mere spectator. Much as he loved the sailing ships he&#39;d been in-and he remembered them with respect and affection till the end of his days-he was among the first shipowners to take down yards and sails and shorten the masts of the steamers he took over. Ernest Fayle, in his general history of world shipping, concluded fifty years ago: We may or may not like all the f eatures of the complicated industrial civilization which is fast transforming the whole world into one economic unit. One thing is certain: for good or evil it is the child of the steamship . So what have we saved of this heritage, in concrete terms? Very little. I have walked a wooden boardwalk across the deck beams of the empty iron shell of the steamship Hipparchus , a 1,840-ton steamer of 1867. She was, as Norman Brouwer points out in the standard reference work in the field, the International Register of Historic Ships, one of the first steam vessels to enter the China tea trade after the opening of the Suez Canal in 1869. She and her kind drove out the fine-lined British tea clippers which had kept sail competitive in this trade. A survivorofthatlong-haulpremi umcargo ocean trade is preserved today alongside the National Maritime Museum in Greenwich, a suburb of London. She is the glorious sailing clipper Cutty Sark, actually built in 1869. No early steamer from that trade is preserved. The Hipparchus survives by accident as part of a breakwater in the Straits of Magellan town of Punta Arenas. Nearby in the Straits is the beached and broken hulk of the steamer Amadeo of 1884, a small vessel intended for inter-island trading in that stormy quarter of the world. Both these, of course, were British built and had compound engines. These are the only two known survivors of the 19th-century steamer that conquered the oceans for steam. Oh, 34

there are tugboats saved by local communities, and lake steamers of considerable antiquity in the Swiss lakes and Swedish archipelagos. And there is a splendid coasting steamer of 1890, named the Robin, preserved by the Maritime Trust in Great Britain. A tripleexpansion vessel of 1890, this 366-ton vessel gives an idea in petto of the ship in which Runciman experienced that gale of 1878, trading to the Mediterranean. But beyond that, there&#39;s nothing, except for river and sound and harbor vessels that have little relation to the breed of vessel that won the ocean trades. There is the triple-expansion powered Liberty ship Jeremiah O&#39; Brien in San Francisco, the John W. Brown in Baltimore--deliberate throwbacks designed to exploit readily available technology and get more tonnage afloat to tum the tide of war in the global conflict of the 1940s. Of actual warships, there is a more extensive collection, telling a much fuller story. There is, first and foremost, that &quot;black snake among the rabbits,&quot; as Napoleon III called her, the Warrior of 1860. She has been restored in faithful and living detail (complete with memoirs and mementos saved through families of men that sailed in her), and will eventually be part of the three epochs in the development of the battleship on exhibition at Portsmouth in England. The others are the Mary Rose of 1511 , which may fairly be termed the first battleship (armed primarily with shipkilling guns), and HMS Victory of 1765, the first-rate ship-of-the-line aboard which Nelson led the English to victory over the Franco-Spanish fleet at the Battle of Trafalgar in 1805-a battle that effectively ended Napoleon &#39; s plans to invade the British Isles, and led him to turn east in a disastrous attack on Russia. Aside from mixed types, like the steam frigate Jylland of 1860 in Denmark, or the Royal Navy steam sloop Gannet of 1878 at Portsmouth, a number of important steam warships survive from the era between the end of the American Civil War in 1865 and the outbreak of World War I in Europe in 1914. Surprisingly, a couple of turret ships, next-step adaptations of the Monitor idea, survive in the Pacific World: the seagoing monitor Huascar, built in England for Peru in 1865 and captured by Chile in 1879, now a museum ship in Chile, and the coast defense monitorCerberusof 1868, which survives as a breakwater for a yacht club

in Melbourne, Australia-her stout muzzle-loading gun barrels still crouched like waiting lions in their armored turret. And there is the protected cruiser Olympia of 1892, a survivorofthe Spanish-American War, in which she actually served as Admiral George Dewey&#39;s flagship at the Battle of Manila Bay. Berthed now at Penn &#39;s Landing, Philadelphia, as a museum ship, she radiates the feeling of her confidently assertive era, and marks a clean break with the look of the sailing frigates that had done cruiser duty up until just before her time. (Even the marvelously advanced Warrior bore a full sailing rig.) And in St. Petersburg the cruiser Aurora, built in a local yard in 1900, survives as one of the ships that played a role in the Communist Revolution of 1917-which is why she is now preserved as a museum. A little bigger than Olympia, she has triple-expansion engines of less horsepower than Olympia&#39;s and with light armament. Lacking the Olympia &#39;s heavy turrets fore and aft, she presents a far less formidable appearance. (The four battleships of the Marat class, a dozen years later, more than made up for this with the first triple turrets, whose 12-inch guns helped stop the German s outside Leningrad in 1941-but they were not preserved.) The Mikasa , Togo &#39;s flagship at the Battle ofTsushima in 1905, in which the European squadrons of the Imperial Russian Navy were destroyed, having been sent round to overcome the Japanese fleet after it had destroyed the Russian Far Eastern fleet, has been preserved. Built in England in 1900, she too, bristling with guns of various sizes, has the curiously medieval look of these first full-fledged products of the machine age at sea. A forceful confidence is expressed in the craggy, formidable shape of the US battleship Texas , now preserved outside Houston. Launched in 1912, she carries ten giant 14-inch guns and was at the time of her launch the most powerful ship in the world. She is appropriately powered with two 4-cylinder triple expansion engines. The turbines fitted to her immediate predecessors in the Arkansas class were not up to snuff, so the Navy, properly conservative, reverted to the heavier, cruder engine for this class. She is a durable ship, and her usefulness extended into World War II, where her giant shells knocked out German fortifications from miles away, and the few shells she received in return bounced off SEA HISTORY 65, SPRING 1993