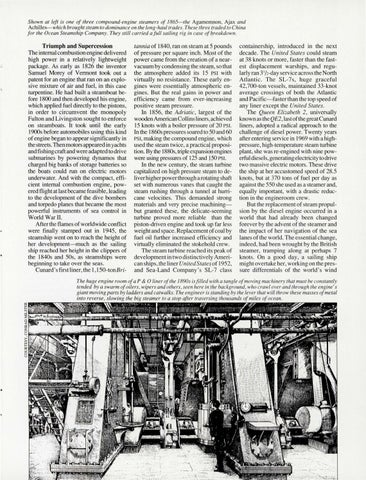 Shown at left is one of three compound-engine steamers of 1865-the Agamemnon, Ajax and Achilles-- which brought steam to dominance on the long-haul trades. These three traded to China for the Ocean Steamship Company. They still carried a full sailing rig in case of breakdown .

Triumph and Supercession The internal combustion engine delivered high power in a relatively lightweight package. As early as 1826 the inventor Samuel Morey of Vermont took out a patent for an engine that ran on an explosive mixture of air and fuel, in this case turpentine. He had built a steamboat before 1800 and then developed his engine, which applied fuel directly to the pistons, in order to circumvent the monopoly Fulton and Livingston sought to enforce on steamboats. It took until the early 1900s before automobiles using this kind of engine began to appear significantly in the streets. Then motors appeared in yachts and fishing craft and were adapted to drive submarines by powering dynamos that charged big banks of storage batteries so the boats could run on electric motors underwater. And with the compact, efficient internal combustion engine, powered flight at last became feasible, leading to the development of the dive bombers and torpedo planes that became the most powerful instruments of sea control in World War II. After the flames of worldwide conflict were finally stamped out in 1945, the steamship went on to reach the height of her development-much as the sailing ship reached her height in the clippers of the 1840s and 50s, as steamships were beginning to take over the seas. Cunard &#39;s first liner, the 1,150-tonBri-

tannia of 1840, ran on steam at 5 pounds of pressure per square inch. Most of the power came from the creation pf a nearvacuum by condensing the steam, so that the atmosphere added its 15 PSI with virtually no resistance. These early engines were essentially atmospheric engines. But the real gains in power and efficiency came from ever-increasing positive steam pressure. In 1856, the Adriatic, largest of the wooden American Collins liners, achieved 15 knots with a boiler pressure of 20 PSI. In the 1860s pressures soared to ~O and 60 PSI, making the compound engi11e, which used the steam twice, a practicaj proposition. By the 1880s, triple expansiqn engines were using pressures of 125 and l 50 PSI. In the new century, the steam turbine capitalized on high pressure ste;un to deliver higher power through a rotating shaft set with numerous vanes that q mght the steam rushing through a tunnel at hurricane velocities. This demanded strong materials and very precise maohiningbut granted these, the delicate-seeming turbine proved more reliable than the piston-driven engine and took ~p far less weight and space. Replacement of coal by fuel oil further increased efficiency and virtually eliminated the stokehold crew. The steam turbine reached its peak of development in two distinctively American ships, the liner United State~ of 1952, and Sea-Land Company &#39;s SL-7 class

containership, introduced in the next decade. The United States could steam at 38 knots or more, faster than the fastest displacement warships, and regularly ran 3 1/2-day service across the North Atlantic. The SL-7s, huge graceful 42,700-ton vessels, maintained 33-knot average cross ings of both the Atlantic and Pacific-faster than the top speed of any liner except the United States. The Queen Elizabeth 2, universally known as the QE2, last of the great Cunard liners, adopted a radical approach to the challenge of diesel power. Twenty years after entering service in 1969 with a highpressure, high-temperature steam turbine plant, she was re-engined with nine powerful diesels, generating electricity to drive two massive electric motors. These drive the ship at her accustomed speed of 28.5 knots, but at 370 tons of fuel per day as against the 550 she used as a steamer and, equally important, with a drastic reduction in the engineroom crew. But the replacement of steam propulsion by the diesel engine occurred in a world that had already been changed forever by the advent of the steamer and the impact of her navigation of the sea lanes of the world. The essential change, indeed, had been wrought by the British steamer, tramping along at perhaps 7 knots. On a good day, a sailing ship might overtake her, working on the pressure differentials of the world&#39;s wind

The huge engine room of a P &amp; 0 liner of the 1890s is filled with a tangle of moving machinery that must be constantly tended by a swarm of oilers, wipers and others, seen here in the background, who crawl over and through the engine&#39; s giant moving parts by ladders and catwalks. The engineer is standing by the lever that will throw these masses of metal into reverse , slowing the big steamer to a stop after traversing thousands of miles of ocean .