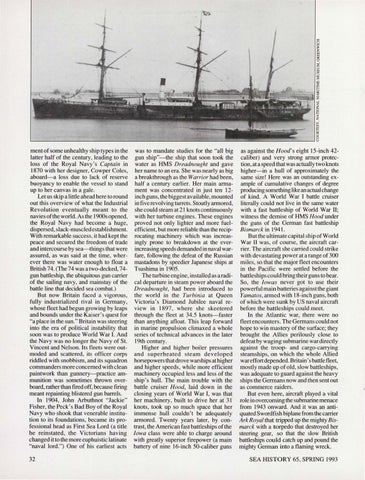 ment of some unhealthy ship types in the was to mandate studies for the &quot;all big latter half of the century, leading to the gun ship&quot;-the ship that soon took the loss of the Royal Navy&#39;s Captain in water as HMS Dreadnought and gave 1870 with her designer, Cowper Coles, her name to an era. She was nearly as big aboard-a loss due to lack of reserve a breakthrough as the Warrior had been, buoyancy to enable the vessel to stand half a century earlier. Her main armaup to her canvas in a gale. ment was concentrated in just ten 12Let us skip a little ahead here to round inch guns, the biggest avai lable, mounted out this overview of what the Industrial in five revolving turrets. Stoutly armored, Revolution eventually meant to the she could steam at 21 knots continuously navies of the world. As the 1900s opened, with her turbine engines. These engines the Royal Navy had become a huge, proved not only lighter and more fueldispersed, slack-muscled establishment. efficient, but more reliable than the recipWith remarkable success, it had kept the rocating machinery which was increaspeace and secured the freedom of trade ingly prone to breakdown at the everand intercourse by sea-things that were increasing speeds demanded in naval warassured, as was said at the time, wher- fare, following the defeat of the Russian ever there was water enough to float a mastadons by speedier Japanese ships at British 74. (The 74 was a two-decked, 74- Tsushima in 1905. gun battleship, the ubiquitous gun carrier The turbine engine, installe9 as a radiof the sailing navy, and mainstay of the cal departure in steam power aboard the battle line that decided sea combat.) Dreadnought, had been introduced to But now Britain faced a vigorous, the world in the Turbinia at Queen fully industrialized rival in Germany, Victoria&#39;s Diamond Jubilee naval rewhose fleet had begun growing by leaps view in 1897 , where she skeetered and bounds under the Kaiser&#39;s quest for through the fleet at 34.5 knots-faster &quot;a place in the sun.&quot; Britain was steering than anything afloat. This leap forward into the era of political instability that in marine propulsion climaxed a whole soon was to produce World War I. And series of technical advances in the later the Navy was no longer the Navy of St. 19th century. Vincent and Nelson. Its fleets were outHigher and higher boiler pressures moded and scattered, its officer corps a nd superheated steam developed riddled with snobbism, and its squadron horsepowers that drove warships at higher commanders more concerned with clean and higher speeds, while more efficient paintwork than gunnery-practice am- machinery occupied less and less of the munition was sometimes thrown over- ship&#39;s hull. The main trouble with the board, rather than fired off, because firing battle cruiser Hood, laid down in the meant repainting blistered gun barrels. closing years of World War I, was that In 1904, John Arbuthnot &quot;Jackie&quot; her machinery, built to drive her at 31 Fisher, the Peck &#39;s Bad Boy of the Royal knots, took up so much space that her Navy who shook that venerable institu- immense hull couldn &#39;t be adequately tion to its foundations, became its pro- armored. Twenty years later, by confessional head as First Sea Lord (a title trast, the American fast battleships of the he reinstated, the Victorians having Iowa class were able to charge around changed it to the moreeuphuistic latinate with greatly superior firepower (a main &quot;naval lord.&quot;) One of his earliest acts battery of nine 16-inch 50-caliber guns 32

as against the Hood&#39;s eight 15-inch 42caliber) and very strong armor protection, at a speed that was actually two knots higher-in a hull of approximately the same size! Here was an outstanding example of cumulative changes of degree producing something like an actual change of kind. A World War I battle cruiser literally could not live in the same water with a fast battleship of World War II; witness the demise of HMS Hood under the guns of the German fast battleship Bismarck in 1941. But the ultimate capital ship of World War II was, of course, the aircraft carrier. The aircraft she carried could strike with devastating power at a range of 300 miles, so that the major fleet encounters in the Pacific were settled before the battleships could bring their guns to bear. So, the Iowas never got to use their powerful main batteries against the giant Yamatos, armed with 18-inch guns, both of which were sunk by US naval aircraft before the battleships could meet. In the Atlantic war, there were no fleet encounters. The Germans could not hope to win mastery of the surface; they brought the Allies perilously close to defeat by waging submarine war directly against the troop- and cargo-carrying steamships, on which the whole Allied war effort depended. Britain&#39;s battle fleet, mostly made up of old, slow battleships, was adequate to guard against the heavy ships the Germans now and then sent out as commerce raiders. But even here, aircraft played a vital role in overcoming the submarine menace from 1943 onward. And it was an antiquated Swordfish biplane from the carrier Ark Royal that tripped up the mighty Bismarck with a ttorpedo that destroyed her steering gear, so that the slow British battleships could catch up and pound the mighty German into a flaming wreck. SEA HISTORY 65, SPRING 1993