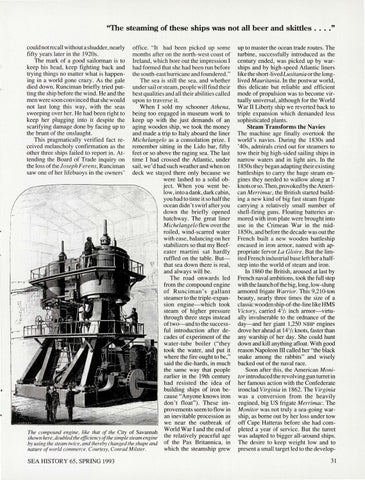 &#39;The steaming of these ships was not all beer and skittles . could not recall with out a sh udder, near! y fifty years later in the 1920s. The mark of a good sailorman is to keep his head, keep fighting back and trying things no matter what is happening in a world gone crazy. As the gale died down, Runciman briefly tried putting the ship before the wind. He and the men were soon convinced that she would not last long this way, with the seas sweeping over her. He had been right to keep her plugging into it despite the scarifying damage done by facing up to the brunt of the onslaught. This pragmatically verified fact received melancholy confirmation as the other three ships failed to report in. Attending the Board of Trade inquiry on the loss ofthelosephFere ns, Runciman saw one of her lifebuoys in the owners &#39;

office. &quot;It had been picked up some months after on the north-west coast of Ireland, which bore out the impression I had formed that she had been run before the south-east hurricane and foundered.&quot; The sea is still the sea, and whether under sail or steam, people will find their best qualities and all their abilities called upon to traverse it. When I sold my schooner Athena, being too engaged in museum work to keep up with the just demands of an aging wooden ship, we took the money and made a trip to Italy aboard the liner Michelangelo as a consolation prize. I remember sitting in the Lido bar, fifty feet or so above the raging sea. The last time I had crossed the Atlantic, under sail, we&#39;d had such weather and when on deck we stayed there only because we were lashed to a solid object. When you went below , into a dank, dark cabin, you had to time it so half the ocean didn &#39; t swirl after you down the briefly opened hatchway. The great liner Michelangelo flew overthe roiled, wind-scarred water with ease, balancing on her stabilizers so that my Beefeater martini sat hardly ruffled on the table. Butthat sea down there is real, and always will be. The road onwards led from the compound engine of Runciman &#39;s gallant steamer to the triple-expansion engine-which took steam of higher pressure through three steps instead of two-and to the successful introduction after decades of experiment of the water-tube boiler (&quot;they took the water, and put it where the fire ought to be,&quot; said the die-hards, in much the same way that people earlier in the 19th century had resisted the idea of building ships of iron because &quot;Anyone knows iron don &#39; t float&quot;). These improvements seem to flow in an inevitable procession as we near the outbreak of World War I and the end of The compound engine, like that of the City of Savannah shown here, doubled the efficiency of the simple steam engine the relatively peaceful age by using the steam twice, and thereby changed the shape and of the Pax Britannica, in which the steamship grew nature of world commerce. Courtesy, Conrad Milster. SEA HISTORY 65 , SPRING 1993

up to master the ocean trade routes. The turbine, successfully introduced as the century ended, was picked up by warships and by high-speed Atlantic liners like the short-Ii ved Lusitania or the longlived Mauritania. In the postwar world, this delicate but reliable and efficient mode of propulsion was to become virtually universal, although for the World War II Liberty ship we reverted back to triple expansion which demanded less sophisticated plants. Steam Transforms the Navies The machine age finally overtook the world&#39; s navies. During the 1830s and &#39;40s, admirals cried out for steamers to tow their big high-sided sailing ships in narrow waters and in light airs. In the 1850s they began adapting their existing battleships to carry the huge steam engines they needed to wallow along at 7 knots or so. Then, provoked by the American Merrimac, the British started building a new kind of big fast steam frigate carrying a relatively small number of shell-firing guns. Floating batteries armored with iron plate were brought into use in the Crimean War in the mid1850s, and before the decade was out the French built a new wooden battleship encased in iron armor, named with appropriate fervor La Gloire. But the limited French industrial base left her a halfstep into the world of steam and iron. In 1860 the British, aroused at last by French naval ambitions, took the full step with the launch of the big, long, low-slung armored frigate Warrior. This 9,210-ton beauty, nearly three times the size of a classic wooden ship-of-the-line like HMS Victory, carried 4 1/2 inch armor-virtually invulnerable to the ordnance of the day-and her giant 1,250 NlliP engines drove her ahead at 14 1/2 knots, faster than any warship of her day. She could hunt down and kill anything afloat. With good reason Napoleon III called her &quot;the black snake among the rabbits&quot; and wisely backed out of the naval race. Soon after this, the American Monitor introduced the revolving gun turret in her famous action with the Confederate ironclad Virginia in 1862. The Virginia was a conversion from the heavily engined, big US frigate Merrima c. The Monitor was not truly a sea-going warship, as borne out by her loss under tow off Cape Hatteras before she had completed a year of service. But the turret was adapted to bigger all-around ships. The desire to keep weight low and to present a small target led to the develop31