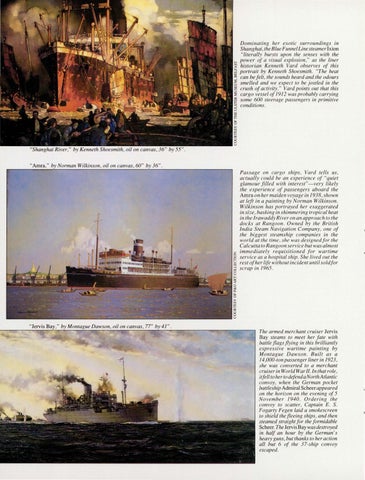 Dominating her exotic surroundings in Shanghai, the Blue Funnel Line steamer Ix ion "literally bursts upon the senses with the power of a visual explosion," as the liner historian Kenneth Vard observes of this portrait by Kenneth Shoesmith. "The heat can be felt, the sounds heard and the odours smelled and we expect to be jostled in the crush of activity." Vard points out that this cargo vessel of 1912 was probably carrying some 600 steerage passengers in primitive conditions.

Passage on cargo ships , Vard tells us, actually could be an experience of "quiet glamour filled with interest"-very likely the experience of passengers aboard the Amraonhermaiden voyage inl938 , shown at left in a painting by Norman Wilkinson. Wilkinson has portrayed her exaggerated in size, basking in shimmering tropical heat in the I rawaddy River on an approach to the docks at Rangoon. Owned by the British India Steam Navigation Company, one of the biggest steamship companies in the world at the time, she was designed for the Calcutta to Rangoon service but was almost z immediately requisitioned for wartime 0 service as a hospital ship. She lived out the ยง rest ofher life without incident until soldfor :l scrap in 1965.

The armed merchant cruiser Jervis Bay steams to meet her fate with battle flags flying in this brilliantly expressive wartime painting by Montague Dawson. Built as a 14 ,000-ton passenger liner in 1923, she was converted to a merchant cruiser in World War fl . In that role, itfell to her to defend aNorthAtlantic convoy, when the German pocket battleship Admiral Scheer appeared on the horizon on the evening of 5 November 1940 . Ordering the convoy to scatter, Captain E. S. Fogarty Fegen laid a smokescreen to shield thefleeing ships, and then steamed straight for the formidable Scheer. The Jervis Bay was destroyed in half an hour by the German's heavy guns, but thanks to her action all but 6 of the 37-ship convoy escaped.