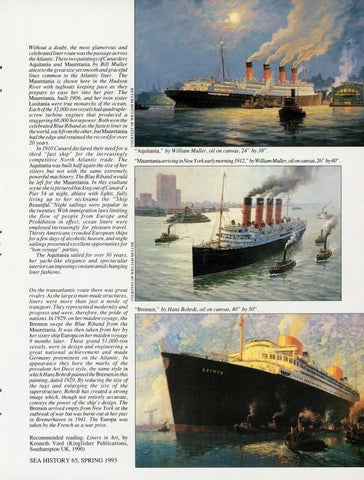 Without a doubt, the most glamorous and celebrated liner route was the passage across the Atlantic. These two paintings ofCunarders Aquitania and Mauretania by Bill Muller attest to the great size yet smooth and graceful lines common to the Atlantic liner. The Mauretania is shown here in the Hudson River with tugboats keeping pace as they &quot;&#39; prepare to ease her into her pier. The ~ Mauretania, built 1906, and her twin sister 5 Lusitania were true monarchs of the ocean. Each ofthe 32 ,000-ton vessels had quadruple- ~ screw turbine engines that produced a ~ staggering 68,000 horsepower. Both won the u. celebrated Blue Riband as the fastest liner in 0&gt;the world, eachfrom the other, but Mauretania had the edge and retained the record for over ::0 0 20 years. u In 1910 Cunard declared their need for a &quot;Aquitania,&quot; by William Muller, oil on canvas, 24&quot; by 38&quot;. third &quot;fast ship&quot; for the increasingly competitive North Atlantic trade. The &quot;Mauretaniaarriving inNew York early morning 1912,&quot; by WilliamMuller,oiloncanvas,26&quot; by40&quot;. Aquitania was built half again the size of her sisters but not with the same extremely powerful machinery. The Blue Riband would be left for the Mauretania. In this exultanl scene she is pictured backing out ofCunard&#39;s Pier 54 at night, ablaze with lights, fully living up to her nickname the &quot;Ship Beautiful.&quot; Night sailings were popular in the twenties . With immigration laws limiting the flow of people from Europe and Prohibition in effect, ocean liners were employed increasingly for pleasure travel. Thirsty Americans crowded European ships for a few days of alcoholic heaven, and night sailings presented excellent opportunitesfor &quot;bon voyage&quot; parties. The Aquitania sailed for over 30 years, her yacht-like elegance and spectacular interiors an imposing constant amid changing liner fashions.

On the transatlantic route there was great rivalry . As the largest man-made structures, liners were more than just a mode of transport. They represented modernity and progress and were, therefore , the pride of nations. In 1929, on her maiden voyage, the Bremen swept the Blue Riband from the Mauretania. It was then taken from her by her sister ship Europa on her maiden voyage 9 months later. These grand 51 ,000-ton vessels, were in design and engineering a great national achievement and made Germany preeminent on the Atlantic. In appearance they bore the marks of the prevalent Art Deco style, the same style in which Hans Bohrdt painted the Bremen in this painting, dated 1929. By reducing the size of the tugs and enlarging the size of the superstructure, Bohrdt has created a strong image which, though not entirely accurate, conveys the power of the ship&#39;s design. The Bremen arrived empty from New York at the outbreak of war but was burnt-out at her pier in Bremerhaven in 1941. The Europa was taken by the French as a war prize. Recommended reading: Liners in Art, by Kenneth Yard (Kingfisher Publications, Southampton UK, 1990)