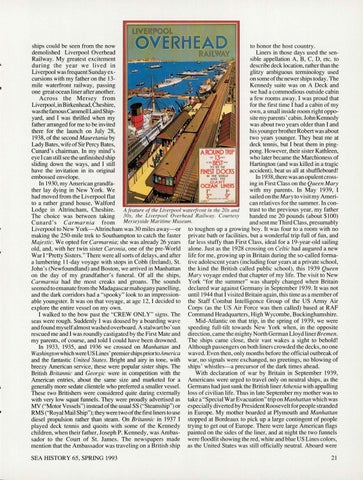 ships could be seen from the now to honor the host country. demolished Liverpool Overhead Liners in those days used the senRailway. My greatest excitement sible appellation A, B, C, D, etc. to during the year we lived in describedecklocation,ratherthan the Liverpool was frequent Sunday exglitzy ambiguous terminology used cursions with my father on the 13on someofthenewerships today. The mile waterfront railway, passing Kennedy suite was on A Deck and we had a commodious outside cabin one great ocean liner after another. Across the Mersey from a few rooms away. I was proud that Liverpool, in Birkenhead, Cheshire, for the first time I had a cabin of my was the famous CammellLaird Shipown, a small inside room right oppoyard, and I was thrilled when my site my parents' cabin. John Kennedy was about two years older than I and father arranged for me to be invited there for the launch on July 28, hisyoungerbrotherRobertwasabout 1938, of the second Mauretania by two years younger. They beat me at Lady Bates, wife of Sir Percy Bates, deck tennis, but I beat them in pingCunard 's chairman. In my mind's AROUND TRIP pong. However, their sister Kathleen, "' 13AA who later became the Marchioness of eye I can still see the unfinished ship sliding down the ways, and I still " ""TOBEST~" Hartington (and was killed in a tragic SEE THE have the invitation in its original FINEST DOCKS accident), beat us all at shuffleboard! embossed envelope. '":~~ ~~Lo In 1938, there was an opulentcrossIn 1930, my American grandfaOCE1.:~NLTNERS ing in First Class on the Queen Mary ther lay dying in New York. We I" vwith my parents. In May 1939, I had moved from the Liverpool flat ~.'.: .. ~ .2' sailedontheMarytovisitmy Amerito a rather grand house, Walford .~.,~-!! " ....~~.~" can relatives for the summer. In conLodge in Altrincham, Cheshire. A feature of the Liverpool waleifront in the 20s and trast to the previous year, my father The choice was between taking 30s, the Liverpool Overhead Railway. Courtesy handed me 20 pounds (about $100) Cunard's Carmarnia from Merseyside Maritime Museum. andsentmeThirdClass,presumably Liverpool to New York-Altrincham was 30 miles away--or to toughen up a growing boy. It was four to a room with no making the 250-mile trek to Southampton to catch the faster private bath or facilities, but a wonderful trip full of fun, and Majestic. We opted for Carmarnia; she was already 26 years far less stuffy than First Class, ideal for a 19-year-old sailing old, and, with her twin sister Caronia, one of the pre-World alone. Just as the I 928 crossing on Celtic had augured a new War I "Pretty Sisters." There were all sorts of delays, and after life for me, growing up in Britain during the so-called formaa lumbering 11-day voyage with stops in Cobh (Ireland), St. tive adolescent years (including four years at a private school, John's (Newfoundland) and Boston, we arrived in Manhattan the kind the British called public school), this 1939 Queen on the day of my grandfather's funeral. Of all the ships, Mary voyage ended that chapter of my life. The visit to New Carmarnia had the most creaks and groans. The sounds York "for the summer" was sharply changed when Britain seemed to emanate from the Madagascar mahogany panelling, declared war against Germany in September 1939. It was not and the dark corridors had a "spooky" look to an impression- until 1944 that I visited Britain again, this time as a member of able youngster. It was on that voyage, at age 12, I decided to the Staff Combat Intelligence Group of the US Army Air explore the entire vessel on my own. Corps (as the US Air Force was then called) based at RAF I walked to the bow past the "CREW ONLY" signs. The Command Headquarters, High Wycombe, Buckinghamshire. seas were rough. Suddenly I was doused by a boarding wave Mid-Atlantic on that trip, in the spring of 1939, we were andfoundmyselfalmostwashedoverboard.Astalwartbo'sun speeding full-tilt towards New York when, in the opposite rescued me and I was roundly castigated by the First Mate and direction, came the mighty North German Lloyd liner Bremen . my parents, of course, and told I could have been drowned. The ships came close, their vast wakes a sight to behold! In 1933, 1935, and 1936 we crossed on Manhattan and Although passengers on both liners crowded the decks, no one Washington which were US Lines' premierships priortoAmerica waved. Even then , only months before the official outbreak of and the fantastic United States. Bright and airy in tone, with war, no signals were exchanged, no greetings, no blowing of breezy American service, these were popular sister ships. The ships' whistles-a precursor of the dark times ahead. With declaration of war by Britain in September 1939, British Britannic and Georgie were in competition with the American entries, about the same size and marketed for a Americans were urged to travel only on neutral ships, as the generally more sedate clientele who preferred a smaller vessel. Germans had just sunk the British liner Athenia with appalling These two Britishers were considered quite daring externally loss of civilian life. Thus in late September my mother was to with very low squat funnels . They were proudly advertised as take a "Special War Evacuation" trip on Manhattan which was MV ("Motor Vessels") instead of the usual SS ("Steamship") or especially diverted by President Roosevelt for people stranded RMS ("Royal Mail Ship"); theyweretwoofthefirst liners to use in Europe. My mother boarded at Plymouth and Manhattan diesel propulsion rather than steam. On Britannic in 1937 I stopped at Bordeaux to pick up a large contingent of people played deck tenni s and quoits with some of the Kennedy trying to get out of Europe. There were large American flags children, when their father, Joseph P. Kennedy , was Am bas- painted on the sides of the liner, and at night the two funnels sador to the Court of St. James. The newspapers made were floodlit showing the red, white and blue US Lines colors, mention that the Ambassador was traveling on a British ship as the United States was still officially neutral. Aboard were 11