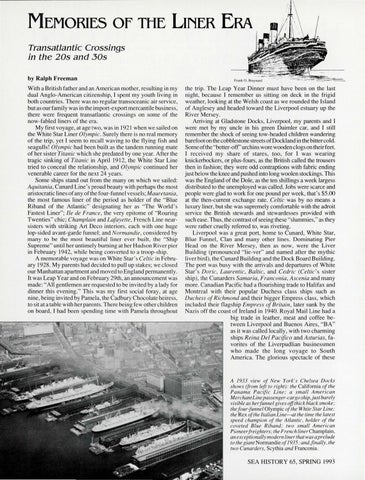 MEMORIES OF THE LINER

Transatlantic Crossings in the 20s and 30s by Ralph Freeman With a British father and an American mother, resulting in my dual Anglo-American ci ti zenship, I spent my yo uth living in both countries. There was no regular transoceanic air service, but as our family was in the import-export mercantile business, there were frequent transatlantic cross ings on some of the now-fabled liners of the era. My first voyage, atage two, was in 1921 when we sailed on the White Star Liner Olympic. Surely there is no real memory of the trip, yet I seem to recall waving to the flyin g fish and seagulls! Olympic had been built as the tandem running mate of her sister Titanic which she predated by one year. After the tragic sinking of Titanic in April 1912, the White Star Line tried to conceal the relationship, and Olympic continued her venerable career for the next 24 years. Some ships stand out from the many on which we sai led: Aquitania, Cunard Line&#39;s proud beauty with perhaps the most aristocratic lines of any of the four-funnel vessels; Mauretania, the most famous liner of the period as holder of the &quot;Blue Riband of the Atlantic&quot; designating her as &quot;The World &#39;s Fastest Liner&quot;; Ile de France , the very ep itome of &quot;Roaring Twenties&quot; chic; Champlain and Lafayette, French Line nearsisters with striking Art Deco interiors, each with one huge lop-sided avant-garde funnel; and Normandie , considered by many to be the most beautiful liner ever built, the &quot;Ship Supreme&quot; until her untimely burning at her Hudson River pier in February 1942, while being converted to a troop-ship. A memorable voyage was on White Star&#39;s Celtic in February 1928. My parents had decided to pull up stakes; we closed our Manhattan apartment and moved to England permanently. It was Leap Year and on February 29th, an announcement was made: &quot;All gentlemen are requested to be invited by a lady for dinner this evening.&quot; This was my first social foray, at age nine, being invited by Pamela, the Cadbury Chocolate heiress, to sit at a table with her parents. There being few other child ren on board, I had been spending time with Pamela throughout

the trip. The Leap Year Dinner must have been on the last night, because I remember us sitting on deck in the frigid weather, looking at the Welsh coast as we rounded the Island of Anglesey and headed toward the Liverpool estuary up the River Mersey. Arriving at Gladstone Docks, Liverpool, my parents and I were met by my uncle in his green Daimler car, and I still remember the shock of seeing tow-headed children wandering barefoot on the cobblestone streets of Dockland in the bitter cold. Some of the &quot;better-off&#39; urchins wore wooden clogs on their feet. I received my share of stares, too, for I was wearing knickerbockers, or plus-fours, as the British called the trousers then in fashion; they were odd contraptions with fabric ending just below the knee and pushed into long woolen stockings. This was the England of the Dole, as the ten shillings a week largess distributed to the unemployed was called. Jobs were scarce and people were glad to work for one pound per week, that &#39;s $5.00 at the then-current exchange rate. Celtic was by no means a luxury liner, but she was supremely comfortable with the adroit serv ice the British stewards and stewardesses provided with such ease. Thus, the contrast of seei ng these &quot;slummies,&quot; as they were rather cruelly referred to, was riveting. Liverpool was a great port, home to Cunard, White Star, Blue Funne l, Clan and many other lines. Dominating Pier Head on the River Mersey, then as now, were the Liver Building (pronounced &quot;lie-ver&quot; and named after the mythic li ver bird), the Cunard Building and the Dock Board Building. The port was busy with the arrivals and departures of White Star&#39;s Doric, Laurentic, Baltic, and Cedric (Celiic&#39;s sister ship), the Cunarders Samaria , Franconia, Ascenia and many more. Canadian Pacific had a flouri shing trade to Halifax and Montreal with their popular Duchess class ships such as Duchess of Richmond and their bigger Empress class , which included their flag ship Empress of Britain, later sunk by the Nazis off the coast of Ireland in 1940. Royal Mail Line had a big trade in leather, meat and coffee between Liverpool and Buenos Aires, &quot;BA&quot; as it was called locally, with two charming ships Reina Del Pacifico and Asturias, favorites of the Liverpudlian businessmen who made th e long voyage to South America. The glorious spectac le of these

A 1933 view of New York&#39;s Chelsea Docks shows (from left to right): the California of the Panama Pa cific Line; a small American Merchant Line passenger-cargo ship.just barely visible as herfunnel gives offthick black smoke; thefourjunnel Olympic of the White Star Line; the Rex ofthe Italian Line-at the time the latest speed champion of the Atlantic, holder of the coveted Blue Riband; two small American Pioneerfreighters; the French linerChamplain, an exceptionally modern liner that was a prelude to the giant Normandie of 1935; and.finally, the two Cunarders, Scythia and Franconia.