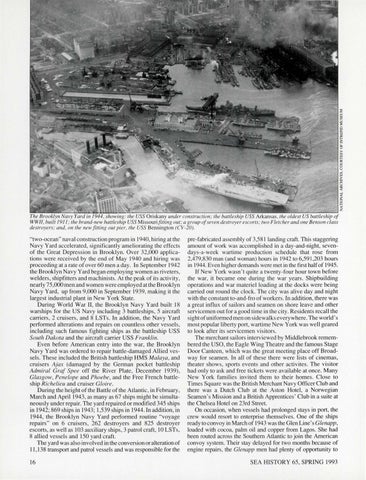 The Brooklyn Navy Yard in 1944, showing: the USS Oriskany under construction; the battleship USS Arkansas, the oldest US battleship of WWII, built 1911; the brand-new battleship USS Missouriji:tting out; a group of seven destroyer escorts; two Fletcher and one Benson class destroyers; and, on the new fitting out pier, the USS Bennington (CV-20).

&quot;two-ocean&quot; naval construction program in 1940, hiring at the Navy Yard accelerated, significantly ameliorating the effects of the Great Depression in Brooklyn. Over 32,000 applications were received by the end of May 1940 and hiring was proceeding at a rate of over 60 men a day. In September 1942 the Brooklyn Navy Yard began employing women as riveters , welders, shipfitters and machinists. At the peak of its activity, near! y 7 5 ,000 men and women were employed at the Brook! yn Navy Yard, up from 9,000 in September 1939, making it the largest industrial plant in New York State. During World War II, the Brooklyn Navy Yard built 18 warships for the US Navy including 3 battleships, 5 aircraft carriers, 2 cruisers, and 8 LSTs. In addition, the Navy Yard performed alterations and repairs on countless other vessels, including such famous fighting ships as the battleship USS South Dakota and the aircraft carrier USS Franklin. Even before American entry into the war, the Brooklyn Navy Yard was ordered to repair battle-damaged Allied vessels. These included the British battleship HMS Malaya , and cruisers Ajax (damaged by the German pocket battleship Admiral Graf Spee off the River Plate, December 1939), Glasgow, Penelope and Phoebe , and the Free French battleship Richelieu and cruiser Gloire. During the height of the Battle of the Atlantic, in February, March and April 1943, as many as 67 ships might be simultaneously under repair. The yard repaired or modified 345 ships in 1942; 869 ships in 1943; 1,539 ships in 1944. In addition, in 1944, the Brooklyn Navy Yard performed routine &quot;voyage repairs&quot; on 6 cruisers, 262 destroyers and 825 destroyer escorts, as well as 103 auxiliary ships, 3 patrol craft, 10 LSTs, 8 allied vessels and 150 yard craft. The yard was also involved in the conversion or alteration of 11,138 transport and patrol vessels and was responsible for the 16

pre-fabricated assembly of 3,581 landing craft. This staggering amount of work was accomplished in a day-and-night, sevendays-a-week wartime production schedule that rose from 2,479,830 man (and woman) hours in 1942 to 6,591,203 hours in 1944. Even higher demands were met in the frrsthalfof 1945. If New York wasn&#39;t quite a twenty-four hour town before the war, it became one during the war years. Shipbuilding operations and war materiel loading at the docks were being carried out round the clock. The city was alive day and night with the constant to-and-fro of workers. In addition, there was a great influx of sailors and seamen on shore leave and other servicemen out for a good time in the city. Residents recall the sight of uniformed men on sidewalks everywhere. The world &#39;s most popular liberty port, wartime New York was well geared to look after its servicemen visitors. The merchant sailors interviewed by Middlebrook remembered the USO, the Eagle Wing Theatre and the famous Stage Door Canteen, which was the great meeting place off Broadway for seamen. In all of these there were lists of cinemas, theater shows , sports events and other activites. The visitor had only to ask and free tickets were available at once. Many New York families invited them to their homes. Close to Times Square was the British Merchant Navy Officer Club and there was a Dutch Club at the Aston Hotel, a Norwegian Seamen&#39;s Mission and a British Apprentices&#39; Club in a suite at the Chelsea Hotel on 23rd Street. On occasion, when vessels had prolonged stays in port, the crew would resort to enterprise themselves. One of the ships ready to convoy in March of 1943 was the Glen Line&#39;s Glenapp, loaded with cocoa, palm oil and copper from Lagos. She had been routed across the Southern Atlantic to join the American convoy system. Their stay delayed for two months because of engine repairs, the Glenapp men had plenty of opportunity to SEA HISTORY 65, SPRING 1993