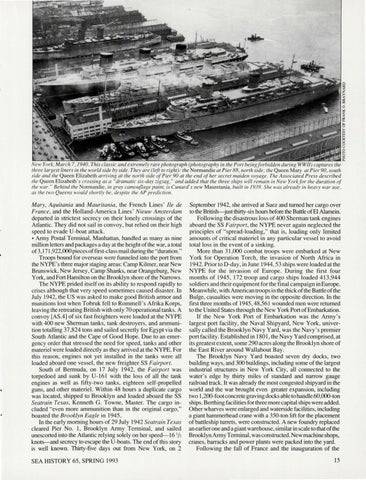 New York, March 7, 1940. This classic and extremely rare photograph (photography in the Port being forbidden during WWII) captures the three largest liners in the world side by side. Th ey are (left to right): the Normandie at Pier 88, north side; the Queen Mary at Pier 90, south side and the Queen Elizabeth arriving at the north side of Pier 90 at the end of her secret maiden voyage. The Associated Press described the Queen Elizabeth&#39;s crossing as a &quot;dramatic six-day zigzag,&quot; and added that the three ships will remain in New York for the duration of the war.&quot; Behind the Normandie, in gray camouflage paint, is Cunard&#39;s new Mauretania, built in 1939. She was already in heavy war use, as the two Queens would shortly be, despite the AP prediction.

Mary, Aquitania and Mauritania , the French Lines&#39; Ile de France, and the Holland-America Lines &#39; Nieuw Amsterdam departed in strictest secrecy on their lonely crossings of the Atlantic. They did not sail in convoy, but relied on their high speed to evade U-boat attack. â&amp;#x20AC;˘ Army Postal Terminal, Manhattan, handled as many as nine million letters and packages a day at the height of the war, a total of 3, 171 ,922,000 pieces of first-class mail during the &quot;duration.&quot; Troops bound for overseas were funneled into the port from the NYPE&#39;s three major staging areas: Camp Kilmer, near New Brunswick, New Jersey, Camp Shanks, near Orangeburg, New York, and Fort Hamilton on the Brooklyn shore of the Narrows. The NYPE prided itself on its ability to respond rapidly to crises although that very speed sometimes caused disaster. In July 1942, the US was asked to make good British armor and munitions lost when Tobruk fell to Rommell &#39;s Afrika Korps, leaving the retreating British with only 70operational tanks. A convoy [AS.4] of six fast freighters were loaded at the NYPE with 400 new Sherman tanks, tank destroyers, and ammunition totalling 37,824 tons and sailed secretly for Egypt via the South Atlantic and the Cape of Good Hope. Due to an emergency order that stressed the need for speed, tanks and other materiel were loaded directly as they arrived at the NYPE. For this reason, engines not yet installed in the tanks were all loaded aboard one vessel, the new freighter SS Fairport. South of Bermuda, on 17 July 1942, the Fairport was torpedoed and sunk by U-161 with the loss of all the tank engines as well as fifty-two tanks, eighteen self-propelled guns, and other materiel. Within 48 hours a duplicate cargo was located, shipped to Brooklyn and loaded aboard the SS Seatrain Texas, Kenneth G. Towne, Master. The cargo included &quot;even more ammunition than in the original cargo,&quot; boasted the Brooklyn Eagle in 1945. In the early morning hours of 29 July 1942 Seatrain Texas cleared Pier No. 1, Brooklyn Army Terminal, and sailed unescorted into the Atlantic relying solely on her speed-16 1/2 knots-and secrecy to escape the U-boats. The end of this story is well known. Thirty-five days out from New York, on 2 SEA HISTORY 65, SPRING 1993

September 1942, she arrived at Suez and turned her cargo over to the British-just thirty-six hours before the Battle ofEl Alamein. Following the disastrous loss of 400 Sherman tank engines aboard the SS Fairport, the NYPE never again neglected the principles of &quot;spread-loading,&quot; that is, loading only limited amounts of critical materiel in any particular vessel to avoid total loss in the event of a sinking. More than 31 ,000 combat troops were embarked at New York for Operation Torch, the invasion of North Africa in 1942. Prior to D-day, in June 1944, 53 ships were loaded atthe NYPE for the invasion of Europe. During the first four months of 1945, 172 troop and cargo ships loaded 413 ,944 soldiers and their equipment for the final campaign in Europe. Meanwhile, with American troops in the thick oftheBattleofthe Bulge, casualties were moving in the opposite direction. In the first three months of 1945, 48,561 wounded men were returned to the United States through the New York Port of Embarkation. If the New York Port of Embarkation was the Army &#39;s largest port facility, the Naval Shipyard, New York, universally called the Brooklyn Navy Yard, was the Navy &#39;s premier port facility. Established in 1801 , the Navy Yard comprised, at its greatest extent, some 290 acres along the Brooklyn shore of the East River around Wallabout Bay. The Brooklyn Navy Yard boasted seven dry docks, two building ways, and 300 buildings, including some of the largest industrial structures in New York City, all connected to the water&#39;s edge by thirty miles of standard and narrow gauge railroad track. It was already the most congested shipyard in the world and the war brought even greater expansion, including two 1,200-foot concrete graving docks able to handle 60,000-ton ships. Berthing facilities for three more capital ships were added. Other wharves were enlarged and waterside facilities, including a giant hammerhead crane with a 350-ton lift for the placement of battleship turrets, were constructed. A new foundry replaced an earlier one and a giant warehouse, similar in scale to that of the Brooklyn Army Terminal, was constructed. New machine shops, cranes, barracks and power plants were packed into the yard. Following the fall of France and the inauguration of the 15