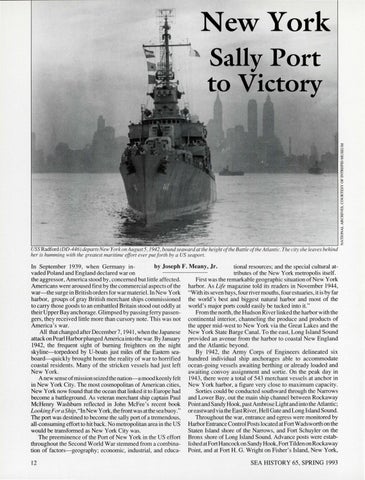 USS Radford (DD-446) departs New Yark on August 5, 1942, bound seaward at the height of the Battle of the Atlantic. The city she leaves behind her is humming with the greatest maritime effort ever put f orth by a US seaport.

by Joseph F. Meany, Jr. In September 1939, when Germany intional resources; and the special cultural atvaded Poland and England declared war on tributes of the New York metropolis itself. First was the remarkable geographic situation of New York the aggressor, America stood by, concerned but little affected. Americans were aroused first by the commercial aspects of the harbor. As Life magazine told its readers in November 1944, war-the surge in British orders for war materiel. In New York &quot;With its seven bays, four river mouths, four estuaries, it is by far harbor, groups of gray British merchant ships commissioned the world &#39;s best and biggest natural harbor and most of the to carry those goods to an embattled Britain stood out oddly at world&#39;s major ports could easily be tucked into it.&quot; their Upper Bay anchorage. Glimpsed by passing ferry passenFrom the north, the Hudson River linked the harbor with the gers, they received little more than cursory note . This was not continental interior, channeling the produce and products of America&#39;s war. the upper mid-west to New York via the Great Lakes and the All that changed after December 7, 1941, when the Japanese New York State Barge Canal. To the east, Long Island Sound attack on Pearl Harbor plunged America into the war. By January provided an avenue from the harbor to coastal New England 1942, the frequent sight of burning freighters on the night and the Atlantic beyond. skyline-torpedoed by U-boats just miles off the Eastern seaBy 1942, the Army Corps of Engineers delineated six board-quickly brought home the reality of war to horrified hundred individual ship anchorages able to accommodate coastal residents. Many of the stricken vessels had just left ocean-going vessels awaiting berthing or already loaded and New York. awaiting convoy assignment and sortie. On the peak day in A new sense of mission seized the nation-a mood keenly felt 1943, there were a total of 543 merchant vessels at anchor in in New York City. The most cosmopolitan of American cities, New York harbor, a figure very close to maximum capacity. Sorties could be conducted southward through the Narrows New York now found that the ocean that linked it to Europe had become a battleground. As veteran merchant ship captain Paul and Lower Bay, out the main ship channel between Rockaway McHenry Washburn reflected in John McFee &#39;s recent book Point and Sandy Hook, past Ambrose Light and into the Atlantic; Looking For a Ship, &quot;In New York, the front was at the sea buoy.&quot; or eastward via the East River, Hell Gate and Long Island Sound. Throughout the war, entrance and egress were monitored by The port was destined to become the sally port of a tremendous, all-consuming effort to hit back. No metropolitan area in the US Harbor Entrance Control Posts located at Fort Wadsworth on the Staten Island shore of the Narrows, and Fort Schuyler on the would be transformed as New York City was. The preeminence of the Port of New York in the US effort Bronx shore of Long Island Sound. Advance posts were estabthroughout the Second World War stemmed from a combina- li shed at Fort Hancock on Sandy Hook, Fort Tilden on Rockaway tion of factors-geography; economic, industrial, and educa- Point, and at Fort H. G. Wright on Fisher&#39;s Island, New York, 12