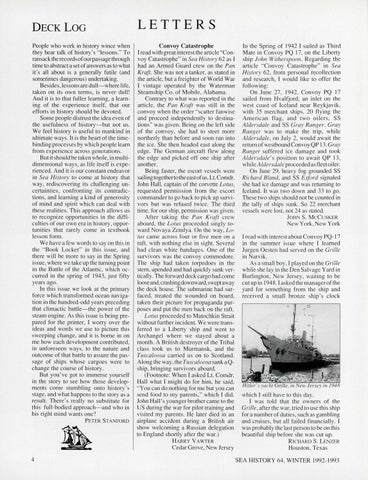 DECK LOG People who work in history wince when they hear talk of history&#39;s &quot; lessons.&quot; To ransack the records of our passage through time to abstract a set of answers as to what it &#39;s all about is a generally futile (and sometimes dangerous) undertaking. Besides, lessons are dull-where life, taken on its ow n terms , is never dull! And it is to that fuller learning, a learning of the experience itself, that our efforts in hi story shou ld be devoted . Some people distrust the idea even of the usefu lness of hi story-but not us. We feel hi story is usefu l to mankind in ultimate ways. It is the heart of the timebinding processes by wh ich people learn from experi ence across generations. But it should be taken whole, in multidimensional ways, as life itself is experienced. And it is our constant endeavor in Sea History to come at hi story that way, red iscovering its challenging uncertainti es, confronting its contradictions, and learn ing a kind of generosity of mind and spirit which can deal with these realities. This approach allows us to recogni ze opportunities in the difficulties of our own era in hi story, opportuniti es that rarely come in textbook lesson form. We have a few words to say on this in the &quot; Book Locker&quot; in thi s issue, and there will be more to say in the Spring iss ue, where we take up the turning point in the Battle of the Atl antic , which occurred in the spring of 1943, just fifty years ago. In thi s iss ue we look at the primary force which transformed ocean navigation in the hundred-odd years preceding that clim actic battle-the power of the steam engine. As this issue is being prepared for the printer, I worry over the ideas and words we use to picture this sweep ing change, and it is borne in on me how each development contributed, in unforeseen ways, to the nature and outcome of that battle to assure the passage of ships whose cargoes were to change the course of hi story. But yo u&#39; ve got to immerse yo urself in the story to see how those developments come stumbling onto hi story&#39; s stage, and what happens to the story as a result. There &#39; s really no substitute fo r this full-bodi ed approach-and who in hi s ri ght mind wants one? PETER STANFORD

LETTERS Convoy Catastrophe I read with great interestthearti cle &quot; Convoy Catastrophe&quot; in Sea History 62 as I had an Armed Guard crew on the Pan Kraft. She was not a tanker, as stated in the article, but a freighter of World War I vintage operated by the Waterman Steamship Co. of Mobile, Alabama. Contrary to what was reported in the article, the Pan Kraft was still in the convoy when the order &quot;scatter fanwise and proceed independentl y to destinations&quot; was given . Being on the left side of the convoy , she had to steer more northerl y than before and soon ran into the ice. She then headed east along the edge. The German aircraft flew along the edge and picked off one ship after another. Being faster, the escort vessels were sailing togetherto the east ofus. Lt. Comdr. John Hall , captain of the corvette Lotus, requested permission from the escort commander to go back to pick up survi vors but was refused twice. The third time, for our ship, perm ission was given. After taking the Pan Kraft crew aboard, the Lotus proceeded singly toward Novaya Zem lya. On the way, Lotus came across four or five men on a raft, with nothing e lse in sight. Several had clean white bandages. One of the surv ivors was the convoy commodore. The sh ip had taken torpedoes in the stern, upended and had quickly sunk vertically. The forward deck cargo had come loose and, crashing downward, swept away the deck house. The submarine had surfaced , treated the wounded on board , take n the ir pi cture for propaganda purposes and put the men back on the raft. Lotus proceeded to Matochkin Strait without further inc ident. We were transferred to a Liberty ship and went to Archangel where we stayed about a month . A British destroyer of the Tribal class took us to Murmansk, and the Tuscaloosa carried us on to Scotland. Along the way, the Tuscaloosa sank a Qship, bringing survivors aboard. (Footnote: When I asked Lt. Comdr. Hall what I mi ght do for him, he said, &quot; You can do nothi ng for me but yo u can send food to my parents,&quot; which I did . John Hall &#39; s yo unger brother came to the US during the war for pilot training and visited my parents. He later died in an airplane accident during a British air show welcoming a Russian delegation to England shortly after the war.)

In the Spring of 1942 I sai led as Third Mate in Convoy PQ 17, on the Liberty ship John Witherspoon . Regarding the article &quot; Convoy Catastrophe&quot; in Sea History 62, from personal recollection and research , I would like to offer the following: On June 27, 1942, Convoy PQ 17 sai led from Hvalfjord, an inlet on the west coast of Iceland near Reykjavik, with 35 merchant ships, 20 flying the American flag, and two oi lers , SS A/dersda/e and SS Gray Ranger . G ray Ranger was to make the trip, while A/dersda/e, on July 2, would await the return of westbound Convoy QP 13. Gray Ranger suffered ice damage and took Aldersdale&#39; s position to awa it QP 13, whi le A /dersda/e proceeded as fleet oiler. On June 29, heavy fog grounded SS Richard Bland, and SS faford signaled she had ice damage and was returning to Iceland. It was two down and 33 to go. These two ships should not be counted in the tall y of ships sunk. So 22 merchant vessels were lost, not 24 as stated. JOHN S . M CCUSKER

New York, New York I read with interest about Convoy PQ-17 in the summer issue where I learned Jurgen Oesten had served on the Grille in Narv ik. As a small boy, I played on the Grille whil e she lay in the Den Sa lvage Yard in Burlington, New Jersey , waiting to be cut up in 1948. I asked the managerofthe yard for something from the ship and received a small bronze ship &#39;s clock D

which I still have to this day . I was told that the owners of the Grille, after the war, tried to use this ship for a number of duties, such as gambling and cru ises , but all fa iled financially. I was probably the last person to be on thi s beautiful ship before she was cut up.