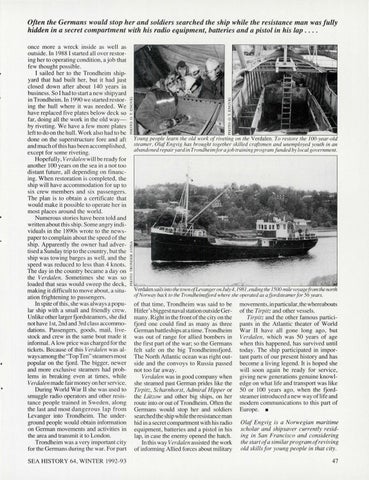 Often the Germans would stop her and soldiers searched the ship while the resistance man was fully hidden in a secret compartment with his radio equipment, batteries and a pistol in his lap .... once more a wreck inside as well as outside. In 1988 I started all over restoring her to operating condition, a job that few thought possible. I sai led her to the Trondheim shipyard that had built her, but it had just closed down after about 140 years in business. So I had to start a new shipyard 0 in Trondheim. In 1990 we started restor&gt; 0 ing the hull where it was needed. We ~ have replaced five plates below deck so f-&#39; ci far, doing all the work in the old wayby riveting. We have a few more plates ~:i: left to do on the hull. Work also had to be 0.. done on the superstructure fore and aft Young people learn the old work of riveting on the Verdalen. To restore the JOO-year-old and much of this has been accomplished , steamer, Olaf Engvig has brought together skilled craftsmen and unemployed youth in an abandoned repair yard in Trondheim/or a job training program funded by local government. except for some riveting. Hopefully, Verda/en will be ready for another 100 years on the sea in a not too distant future, all depending on financing. When restoration is completed, the ship will have accommodation for up to six crew members and six passengers. The plan is to obtain a certificate that would make it possible to operate her in most places around the world. Numerous stories have been told and written about this ship. Some angry individuals in the 1890s wrote to the newspaper to complain about the speed of the ship. Apparently the owner had adver- .&quot;Ji tised a Sunday trip to the country, but the &gt; &lt; ship was towing barges as well, and the ~

speed was reduced to less than 4 knots . 6 The day in the country became a day on ~ the Verda/en . Sometimes she was so ~&quot;&#39;&quot;Âˇ , .....â&amp;#x20AC;˘.~. :., l &quot;..I:, loaded that seas would sweep the deck, ,.. . JJ. making it difficult to move about, a situ- Verdalensai/s intothe townoflevangeronluly4,1981 ,ending the /500-m ilevoyagefromthenorth ation frightening to passengers. of N0tway back to the Trondheimsfjord where she operated as afjordsteamerfor 56 years. In spite of this, she was always a popu- of that time, Trondheim was said to be movements, in particular, the whereabouts lar ship with a small and friendly crew. Hitler&#39;s biggest naval station outside Ger- of the Tirpitz and other vessels. Unlike other largerfjordsteamers, she did many. Right in the front of the city on the Tirpitz and the other famous particinot have I st, 2nd and 3rd class accommo- fjord one could find as many as three pants in the Atlantic theater of World dations. Passengers, goods, mail , live- German battleships ata time. Trondheim War II have all gone long ago, but stock and crew in the same boat made it was out of range for allied bombers in Verda/en, which was 50 years of age informal. A low price was charged for the the first part of the war; so the Germans when this happened , has survived until tickets. Because of this Verda/en was al- felt safe on the big Trondheimsfjord. today. The ship participated in imporwaysamongthe &quot;TopTen&quot;steamersmost The North Atlantic ocean was right out- tant parts of our present history and has popular on the fjord. The bigger, newer side and the convoys to Russia passed become a living legend. It is hoped she and more exclusive steamers had prob- not too far away. will soon again be ready for service, Verda/en was in good company when giving new generations genuine knowl!ems in breaking even at times, while Verdalen made fair money on her serv ice. she steamed past German prides like the edge on what life and transport was like During World War II she was used to Tirpitz, Scharnhorst, Admiral Hipper or 50 or 100 years ago, when the fjordsmuggle radio operators and other res is- the Li.i.tzow and other big ships, on her steamer introduced a new way oflife and tance people trained in Sweden, along route into or out of Trondheim. Often the modern communications to this part of the last and most dan gero us lap from Germans would stop her and soldiers Europe. â&amp;#x20AC;˘ Levanger into Trondheim. The under- searchedthe shipwhiletheresistanceman ground people would obtain information hid in a secret compartment with his radio Olaf Engvig is a Norwegian maritime on German movements and activities in equipment, batteries and a pi stol in his scholar and shipsaver currently residing in San Francisco and considering the area and transmit it to London. lap, in case the enemy opened the hatch. Trondheim was a very important city In this way Verda/en assisted the work the start ofa similar program ofreviving for the Germans during the war. For part of informing Allied forces about military old skills for young people in that city. SEA HISTORY 64, WINTER 1992-93