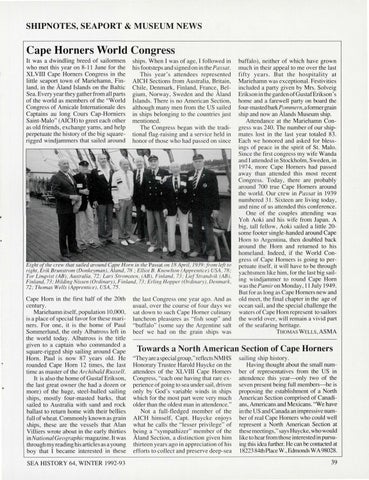 Cape Horners World Congress It was a dwindling breed of sailonnen who met this year on 8-11 June for the XL VIII Cape Homers Congress in the little seaport town of Mariehamn, Finland, in the Aland Islands on the Baltic Sea. Every year they gather from all parts of the world as members of the &quot; World Congress of Amicale Internationale des Captains au long Cours Cap-Homiers Saint-Malo&quot; (AICH) to greet each other as old friends , exchange yam s, and help perpetuate the hi story of the big squarerigged windjammers that sailed around

ships. When I was of age, I followed in hi s footsteps and signed on in thePassat. This year&#39;s attendees represented AICH Sections from Australia, Britain, Chile, Denmark, Finland , France, Belgium , Norway, Sweden and the Aland Islands. There is no American Section, although many men from the US sailed in ships belonging to the countries just mentioned . The Congress began with the traditional flag-raising and a service held in honor of those who had passed on since

Cape Hom in the first half of the 20th century. Mariehamn itself, population I 0,000, is a place of special favor for these mariners . For one, it is the home of Paul Sommerlund, the only Albatross left in the world today. Albatross is the title given to a captain who commanded a square- rigged ship sailing around Cape Hom. Paul is now 87 years old. He rounded Cape Hom 12 times, the last time as master of the Archibald Russell. It is also the home of Gustaf Erikson, the last great owner (he had a dozen o r more) of the huge, stee l-hulled sailing ships, mostly four-masted barks, that sai led to Australia with sand and rock ballast to return home with their bellies full of wheat. Commonly known as grain ships, these are the vessels that Alan Villiers wrote about in the earl y thirties in National Geographic magazi ne. It was through my reading his articles as a young boy that I became interested in these SEA HISTORY 64, WINTER 1992-93

the last Congress one year ago. And as usual, over the course of four days we sat down to such Cape Homer culinary luncheon pleasures as &quot;fish soup&quot; and &quot;buffalo&quot; (some say the Argentine salt beef we had on the grain ships was

buffalo) , neither of which have grown much in their appeal to me over the last fifty years. But the hospitality at Mariehamn was exceptional. Festivities included a party given by Mrs. Solveig Erikson in the garden of Gustaf Erikson &#39;s home and a farewell pa1ty on board the four-masted bark Pommern, a former grain ship and now an Atands Museum ship. Attendance at the Mariehamn Congress was 240. The number of our shipmates lost in the last year totaled 83. Each we honored and asked for blessings of peace in the spirit of St. Malo. S ince the first congress my wife Wanda and I attended in Stockholm, Sweden, in 1974, more Cape Homers had passed away than attended thi s most recent Congress. Today , there are probably arou nd 700 true Cape Homers around the world. Our crew in Passat in 1939 numbered 3 1. Sixteen are living today, and nine of us attended this conference. One of the couples attending was Yoh Aoki and hi s wife from Japan. A big, tall fe ll ow, Aoki sa iled a little 20some footer single-handed around Cape Horn to Argentina, then doubled back aro und the Horn and returned to hi s homeland . Indeed, if the World Congress of Cape Homers is go ing to perpetuate itself, it will have to be through yachtsmen like him , for the last big sail ing windjammer to round Cape Hom was thePamiron Monday, 11July1949. But for as long as Cape Homers new and old meet, the final chapter in the age of ocean sa il , and the spec ial challenge the waters of Cape Horn represent to sailors the world over, will remain a vivid part of the seafaring heritage. THOMAS WELLS, ASMA

Towards a North American Section of Cape Horners &quot;They are a special group,&quot; reflects NMHS Honorary Trustee Harold Huycke on the attendees of the XL VIII Cape Homers Congress, &quot;each one having that rare experience of going to sea under sail , driven only by God &#39;s variable winds in ships which for the most part were very much older than the oldest man in attendence.&quot; Not a full-fledged member of the AICH himself, Capt. Huycke enjoys what he call s the &quot; lesser privilege&quot; of being a &quot;sympathizer&quot; member of the A land Section, a distinction g iven him thirteen years ago in appreciation of hi s efforts to collect and preserve deep-sea

sa iling ship hi story. Having thought about the small number of representatives from the US in attendence this year--0nly two of the seven present being full members-he is proposing the establishment of a North American Section comprised of Canadians, Americans and Mexicans. &quot;We have in the US and Canada an impressive number of real Cape Homers who could well represent a North American Section at these meetings,&quot; says Huycke, who would like to hear from those interested in pursuing this idea further. He can be contacted at 18223 84th Place W., Edmonds WA 98028. 39