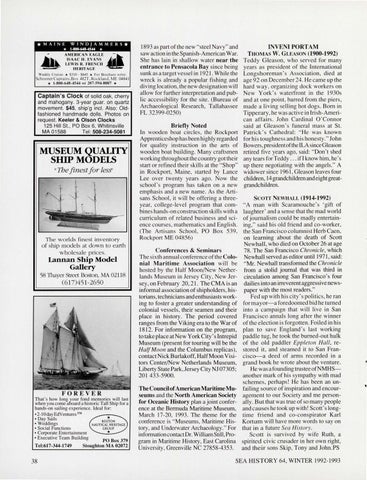 For Brochure wr i1 e:

The worlds finest inventory of ship models at down to earth w holesa le prices.

1893 as part of the new &quot;steel Navy&quot; and saw action in the Spanish-American War. She has lain in shallow water near the entrance to Pensacola Bay since being sunk as a target vessel in 192 I . While the wreck is already a popular fi shing and diving location , the new des ignation will allow for further interpretation and pub1ic accessibility for the site. (Bureau of Archaeological Research , Tallahassee FL 32399-0250) Briefly Noted In wooden boat circles, the Rockport Apprenticeshop has been highly regarded for quality in struction in the arts of wooden boat building. Many craftsmen working throughout the country got their start or refined their skill s at the &quot;Shop&quot; in Rockport, Maine, started by Lance Lee over twenty years ago. Now the school&#39;s program has taken on a new emphasis and a new name. As the Artisans School , it wi ll be offering a threeyear, college- level program that combines hands-on construction skills with a curriculum of related business and science courses, mathematics and English. (The Artisans School , PO Box 539, Rockport ME 04856) Conferences &amp; Seminars The sixth annual conference of the Colonial Maritime Association will be hosted by the Half Moon/New Netherlands Mu seum in Jersey City , New Jersey, on February 20, 21 . The CMA is an informal association of shipholders, historians, technicians and enthusiasts working to fo ster a greater understanding of colonial vessels, their seamen and their place in history . The period covered ranges from the Viking era to the War of 1812. For information on the program , to take place at New York City &#39;s Intrepid Museum (present for touring will be the Half Moon and the Columbus replicas), contact Nick Burlakoff, HalfMoon Visitors Center/New Netherlands Museum, Liberty State Park, Jersey City NJ 07305 ; 201 433 -5900. The Council of American Maritime Museums and the North American Society for Oceanic History plan a joint conference at the Bermuda Maritime Museum, March 17-20, 1993. The theme for the conference is &quot;Museums, Maritime History, and Underwater Archaeology.&quot; For information contact Dr. William Still, Program in Maritime History, East Carolina University, Greenville NC 27858-4353.

Teddy Gleason, who served for many years as president of the International Longs horeman &#39;s Assoc iation , died at age 92 o n December 24. He came up the hard way , organizing dock workers on New York &#39;s waterfront in the 1930s and at one point, barred from the piers, made a living se lling hot dogs. Born in Tipperary, he was active in Iri sh-American affa irs. John Cardinal O &#39;Connor sa id at Gleason &#39;s funeral mass at St. Patrick &#39;s Cathedral: &quot;He was known for hi s toughness and his honesty. &quot; John Bowers, president of the ILA since Gleason retired five years ago, said: &quot;Don &#39; t shed any tears fo r Teddy ... ifl know him , he&#39;s up there negotiating with the angels.&quot; A widower since I 96 I , Gleason leaves four children, 14 grandchildren and eight greatgrandchildren.

SCOTT NEWHALL (1914-1992) &quot; A man with Scaramouche&#39;s &#39;gift of laughter &#39; and a sense that the mad world of journalism could be madly entertaining,&quot; said his old friend and co-worker, the San Francisco columnist Herb Caen, on learning about the death of Scott Newhall , who died on October 26 at age 78. The San Francisco Chronicle, which Newhall served as editor until 1971, said: &quot;Mr. Newhall transformed the Chronicle from a stolid journal that was third in circulation among San Francisco&#39;s four dailies into an irreverent aggressive newspaper with the most readers.&quot; Fed up with hi s city &#39;s politics, he ra n for mayor-a foredoomed bid he turned into a campaign that will live in San Franc isco annals long after the winner of the e lection is forgotten. Foiled in his plan to save England&#39;s last working paddle tug , he took the burned-out hulk of the old paddler Eppleton Hall , restored it, and steamed it to San Francisco-a deed of arm s recorded in a grand book he wrote about the venture. He was a founding trusteeofNMHSanother mark of hi s sympathy with mad schemes, perhaps! He has been an unfai ling source of inspiration and encouragement to our Society and me personally. But that was true of so many people and causes he took up with! Scott&#39;s longtime friend and co-conspirator Karl KortLDm will have more words to say on that in a future Sea History. Scott is survived by wife Ruth, a spirite d civic crusader in her own right, and their sons Skip, Tony and John .PS