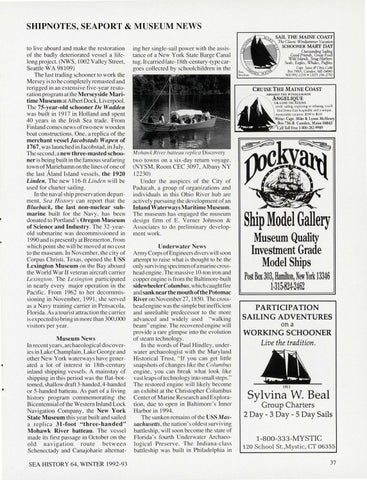 to live aboard and make the restoration of the badl y deteriorated vessel a lifelong project. (NWS , 1002 Valley Street, Seattle WA 98109) The las t trading schooner to wo rk the Mersey is to be compl etely remasted a nd rerigged in an extensive fi ve-year restoration program at the Merseyside Maritime Museum at Albert Dock, Liverpool. The 75-year-old schooner De Wadden was built in 19 17 in Ho ll and and spent 40 years in the Irish Sea trade. From Finl and comes news of two new wooden boat constructions. One, a replica of the merchant vessel Jacobstads Wapen of 1767, was launched in Jaco bstad, in July. The second , a new three-masted schooner is be ing built in the fa mous seafaring town ofM ariehamn on the lines of o ne of the las t A land Island vessels, the 1920 Linden. The new 11 6-ft Linden w ill be used for charter sailing. In the naval ship preservation department, Sea History can report that the Blueback, the last non-nuclear submarine built fo r the Navy, has been donated to Portl and &#39;s Oregon Museum of Science and Industry. The 32-yearold submarine was decommi ss ioned in 1990 and is presentl y at Bremerton, fro m whi ch point she will be moved at no cost to the museum. In November, the c ity of Corpus Chri sti , Texas , opened the USS Lexington Museum on the Bay aboard the World War II veteran aircraft carrier Lexington. The Lexington parti ci pated in nearl y every major operati on in the Pac ifi c. From 1962 to her decommi ssioning in November, 199 1, she served as a Navy training carrier in Pensaco la, Florida. As a touri st attraction the carrier is ex pected to bring in more than 300,000 visitors per year.

ing her single-sail power with the ass istance of a New York State Barge Canal tug. It carried late- 18th-centu ry-type cargoes collected by schoo lchildren in the

two towns on a six-day return voyage. (NYS M, Room CEC 3097 , Albany NY 12230) Under the auspi ces of the City of Paducah, a group of organ izations and ind ivid ua ls in thi s Ohio Ri ver hu b are ac ti vely pursuing the development of an Inland Waterways Maritime Museum. T he museum has engaged the museum des ign firm of E. Verner Johnson &amp; Assoc iates to do pre liminary development work. Underwater News Arm y Corps of Engineers divers will soon attempt to raise what is thought to be the onl y survi ving specimen of amarinecrosshead engine. The mass ive 10-ton iron and copper engine is from the Baltimore-built sidewheelerColumbus, which caught fire and sank near the mouth of the Potomac River on November 27, 1850. The crosshead engine was the simple but ineffi cient and unreliable predecessor to the more advanced and widel y used &quot; walking beam&quot; engine. The recovered engine will prov ide a rare glimpse into the evolution of steam technology. In the words of Paul Hindley, underwater archaeol ogist with the Mary land Hi storica l Tru st, &quot; If yo u can get little snapshots of changes li ke the Columbus engine, yo u can break what look like vast leaps of technology into smalI steps.&quot; The restored eng ine will like ly become an ex hibit at the Chri stopher Co lumbus CenterofMarine Research and Exp loration, due to open in Baltimore &#39; s Inner Harbor in 1994. T he sunken remain s of the USS Massachusetts, the nation&#39;s oldest surviving battleship, will soon become the state of Florida &#39; s fo urth Underwater Archaeolog ica l Prese rve. T he Indi ana-c las s battleship was built in Ph iladelphi a in