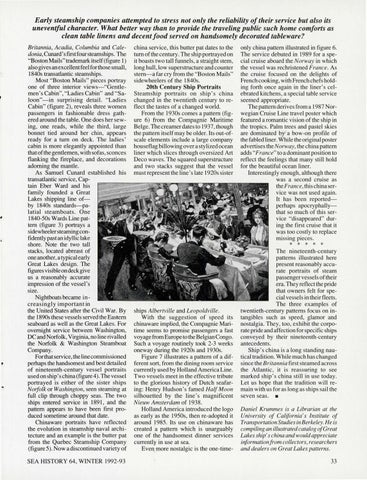 Early steamship companies attempted to stress not only the reliability of their service but also its uneventful character. What better way than to provide the traveling public such home comforts as clean table linens and decent food served on handsomely decorated tableware? Britannia, Acadia, Columbia and Caledonia, Cunard&#39;s first four steamships. The &quot;Boston Mails&quot; trademark itself (figure I) also gives an excellent feel for those small, 1840s transatlantic steamships. Most &quot;Boston Mails&quot; pieces portray one of three interior views-&quot;Gentlemen &#39;s Cabin&quot;, &quot;Ladies Cabin&quot; and &quot;Saloon&quot;-in surprising detail. &quot;Ladies Cabin&quot; (figure 2), reveals three women passengers in fas hionable dress gathered around the table. One does her sewing, one reads, while the third, large bonnet tied around her chin, appears ready for a tum on deck. The ladies &#39; cabin is more elegantly appointed than that of the gentlemen, with sofas, sconces flanking the fireplace, and decorations adorning the mantle. As Samuel Cunard established his transatlantic service, Captain Eber Ward and his family founded a Great Lakes shipping line ofby 1840s standards-palatial steamboats. One 1840-50s Wards Line pattern (figure 3) portrays a sidewheeler steaming confidently past an idyllic lake shore. Note the two tall stacks, located abreast of one another, a typical early Great Lakes design. The figures visible on deck give us a reasonably accurate impression of the vessel&#39;s size. Nightboats became increasingly important in the United States after the Civil War. By the 1890s these vessels served the Eastern seaboard as well as the Great Lakes. For overnight service between Washington, DC and Norfolk, Virginia, no line rivalled the Norfolk &amp; Washington Steamboat Company. For that service, the line commissioned perhaps the handsomest and best detailed of nineteenth-century vessel portraits usedonship&#39;schina(figure4). The vessel portrayed is either of the sister ships Norfolk or Washington, seen steaming at full clip through choppy seas. The two ships entered service in 1891 , and the pattern appears to have been first produced sometime around that date. Chinaware portraits have reflected the evolution in steamship naval architecture and an example is the butter pat from the Quebec Steamship Company (figure 5). Now a discontinued variety of

china service, this butter pat dates to the tum of the century. The ship portrayed on it boasts two tall funnels , a straight stem , long hull, low superstructure and counter stem-a far cry from the &quot;Boston Mails&quot; sidewheelers of the 1840s.

20th Century Ship Portraits Steamship portraits on ship &#39;s china changed in the twentieth century to reflect the tastes of a changed world . From the 1930s comes a pattern (figure 6) from the Compagnie Maritime Beige. The creamer dates to 1937, though the pattern itself may be older. Its out-ofscale elements include a large company houseflag billowing over a stylized ocean liner wqich slices through oversized Art Deco waves. The squared superstructure and two stacks suggest that the vessel must represent the line&#39;s late 1920s sister

only china pattern illustrated in figure 6. The service debuted in 1989 for a special cruise aboard the Norway in which the vessel was rechristened France. As the cruise focused on the delights of French cooking, with French chefs holding forth once again in the liner&#39;s celebrated kitchens, a special table serv ice seemed appropriate. The pattern derives from a 1987 Norwegian Cruise Line travel poster which featured a romantic vision of the ship in the tropics. Palm trees and pastel skies are dominated by a bow-on profile of the fabled liner. While the original poster advertises the Norway, the china pattern adds &quot;France&quot; to a dominant position to reflect the feelings that many still hold for the beautiful ocean liner. Interestingly enough, although there was a second cruise as the France, this china service was not used again. It has been reportedperhaps apocryphallythat so much of this service &quot;di sappeared&quot; during the first cruise that it was too costly to replace missing pieces.

ships Albertville and Leopoldville. With the suggestion of speed its chinaware implied, the Compagnie Maritime seems to promise passengers a fast voyage from Europe to the Belgian Congo. Such a voyage routinely took 2-3 weeks oneway during the 1920s and 1930s. Figure 7 illustrates a pattern of a different sort, from the dining room service current! y used by Holland America Line. Two vessels meet in the effective tribute to the glorious history of Dutch seafaring: Henry Hudson &#39;s famed Half Moon silhouetted by the line&#39;s magnificent Nieuw Amsterdam of 1938. Holland America introduced the logo as early as the 1950s, then re-adopted it around 1985. Its use on chinaware has created a pattern which is unarguably one of the handsomest dinner services currently in use at sea. Even more nostalgic is the one-time-

The nineteenth-century patterns illustrated here present reasonably accurate portraits of steam passenger vessel s of their era. They reflect the pride that owners felt for special vessels in their fleets . The three examples of twentieth-century patterns focus on intangibles such as speed, glamor and nostalgia. They, too, exhibit the corporate pride and affection for specific ships conveyed by their nineteenth-century antecedents. Ship&#39;s china is a long standing nautical tradition. While much has changed since the Britannia first steamed across the Atlantic, it is reassuring to see marked ship&#39; s china sti ll in use today. Let us hope that the tradition will remain with us for as long as ships sail the seven seas. â&amp;#x20AC;˘ Daniel Krummes is a Librarian at the University of California&#39;s Institute of Transportation Studies in Berkeley. He is compiling an illustrated catalog ofGreat Lakes ship&#39;s china and would appreciate information from collectors, researchers and dealers on Great Lakes patterns.