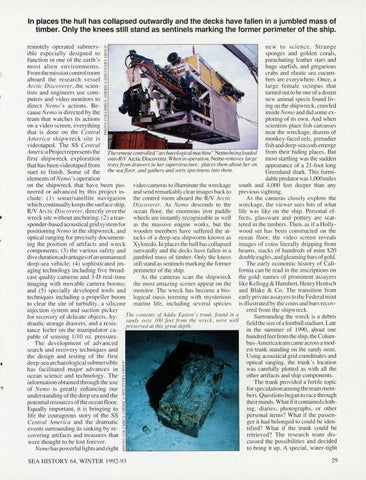 In places the hull has collapsed outwardly and the decks have fallen in a jumbled mass of timber. Only the knees still stand as sentinels marking the former perimeter of the ship. new to science. Strange remotely operated submers- 5 ibl e espec ial ly designed to ~ sponges and golden corals, function in one of the earth &#39;s ;: parachuting feather stars and UJ huge starfish, and gregarious mo s t alien environments. &quot;&#39; &gt; 0 crabs and elastic sea cucumFrom the mi ssion control room u &quot;&#39; aboard the research vessel Ci bers are everywhere. Once, a large fema le octopus that Arctic Discoverer, the sc ien- i5 UJ ti sts and engineers use com- :;: turned out to be one of a dozen new animal specis found livputers and video monitors to ,;,&lt; ::::J direct Nemo&#39;s actions. Be- &quot;&#39;:;: ing on the sh ipwreck, craw led ::::J cause Nemo is directed by the ....l inside Nemo and did some exteam that watches its actions u0 ploring of its own. And when scientists place fish carcasses on a video screen, everything ~ near the wreckage, dozens of that is done on the Central ~ America s hipwreck s ite is monkey-faced eels, grenad ier videotaped. The SS Central fish and deep-sea cods emerge America Project represents the The remote controlled &quot;archaeological machine&quot; Nemobeing loaded from their hiding places. But most startling was the sudden first shipwreck exploration onto RIV Arctic Discoverer. When in operation, Nemo removes large appearance of a 21-foot long that has been videotaped from trays from drawers in her superstructure, places them about her on start to finish. Some of the the sea floor, and gathers and sorts specimens into them. Greenland shark. This formielements of Nemo&#39;s operation dablepredatorwas l ,OOOmiles on the shipwreck that have been pio- video cameras to illuminate the wreckage south and 4,000 feet deeper than any neered or advanced by thi s project in- and send remarkably clear images back to previous sighting. clude: (I) sonar/sate llite navigation the control room aboard the R/V Arctic As the cameras closely explore the which continually keeps the surface ship, Discoverer. As Nemo descends to the wreckage, the viewer sees bits of what R/V Arctic Discoverer, directly over the ocean floor, the enonnous iron paddle life was like on the ship . Personal efwreck site without anchoring; (2) a tran- wheels are instantly recognizable as well fects , glassware and pottery are scatsponder-based acoustical grid system for as the massive engine works , but the tered in the timbers . Then, as if a Hollypositioning Nemo in the shipwreck , and wooden members have suffered the at- wood set has been constructed on the optical ranging for preci se ly document- tacks of a deep-sea shipwonn known as ocean floor, the video screen reveals ing the position of artifacts and wreck Xyloredo. In places the hull has collapsed images of coins literally dripping from components; (3) the various safety and outwardl y and the decks have fallen in a beams, stacks of hundreds of mint $20 dive duration advantages of an unman ned jumbled mass of timber. Only the knees double eagles, and gleam ing bars of go ld. The early economic history of Calideep-sea vehicle; (4) sophi sticated im- still stand as sentinels marking the former forn ia can be read in the inscriptions on aging technology including five broad- perimeter of the ship. As the cameras scan the shipwreck the go ld : names of prominent assayers cast quality cameras and 3-D real-time imaging with movable camera booms; the most amazing scenes appea r on the like Kellogg &amp; Humbert, Henry Hentsch and (5) spec ially developed tools and monitor. The wreck has become a bio- and Blake &amp; Co. The transition from techniques including a propeller boom log ical oasis teeming with mysterious early private assayers to the Federal mint to clear the site of turbidity , a s ili cone marine life, includin g several spec ies is illustrated by the coins and bars recovered from the shipwreck. injection system and suction picker Th e contents of Addie Easton&#39; s trunk, found in a Surrounding the wreck is a debris for recovery of delicate objects, hysandy oo:e 100 feet jiÂˇom the wreck, were well field the size of a football stad ium . Late draulic storage drawers, and a resis- presened at this great depth. in the summer of 1990, about one tance feeler on the manipul ator cahund red feet from the ship, the Col umpabl e of sensing 1/ 10 oz. press ure. Âˇ bus-America team came across a modThe deve lopment of advanced est trunk standing on the sandy ooze. search and recovery techniques and Us ing acoustical grid coordinates and the des ign and testing of the first optical ranging, the trunk &#39;s location deep-sea archaeological submers ible was carefu ll y plotted as with all the has facilitated major advances in other artifacts and ship components. ocean sc ience and technology. The The trunk provided a fertile topic information obtained through the use for speculation among the team memof Nemo is greatly enhancing our bers. Questions began to race through understanding of the deep sea and the their minds. Whatifitcontainedclothpotential resources of the ocean floor. ing, diaries, photographs, or other Equally important, it is bringing to personal items? What if the passenlife the courageo us story of the SS ger it had belonged to could be idenCentral America and the dramatic tified? What if the trunk could be events surrounding its sinking by reretrieved? The research team discoverin g artifacts and treasures that cussed the possibilities and decided were tho ught to be lost forever. to bring it up. A special , water-tight Nemo has powerful lights and e ight