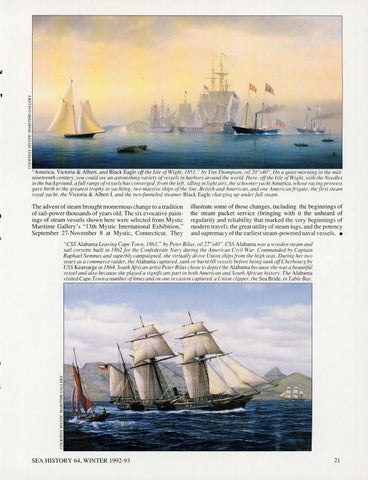 &quot; America, Victoria &amp; Albert, and Black Eagle off the Isle of Wight, 1851 ,&quot; by Tim Th ompson , oil 20&quot;x40&quot;. On a quiet morning in th e midnineteenth century, you could see an astonishing variety of vessels in harbors around the world. Here , off the Isle of Wight , with the Needles in the background, a full range of vessels has converged .from the left, idling in light airs, the schooner yacht America, whose racing prowess gave birth to the greatest trophy in yachting; rwo massive ships of the line, British and American , and one American frigate; th e first steam royal yacht , the Victoria &amp; Albert I, and the two-funneled steamer Black Eagle charging up underfull steam .

illustrate some of those changes, including the beginnings of the steam packet service (bringing with it the unheard of regularity and reliability that marked the very beginnings of modem travel), the great utility of steam tugs, and the potency and supremacy of the earliest steam-powered naval vessel s. â&amp;#x20AC;˘

&quot;CSS Alabama Leaving Cape Town , 1863 ,&quot; by Peter Bi/as, oil 27&quot;x40&quot;. CSS Alabama was a wooden steam and sail corvette built in l 862 for the Confederate Navy during the American Civil War . Commanded by Captain Raphael Semmes and superbly campaigned , she virtually drove Union ships from the high seas . During her two years as a commerce raider, the Alabama captured , san k or burnt 68 vessels before being sunk off Cherbourg by USS Kearsarge in 1864. South African artist Peter Bi/as chose to depict the Alabama because she was a beautiful vessel and also because she played a significant part in both American and South African history . Th e Al abam a visited Cape Town a number of times and on one occasion captured a Union clipper, the Sea Bride, in Table Bay .