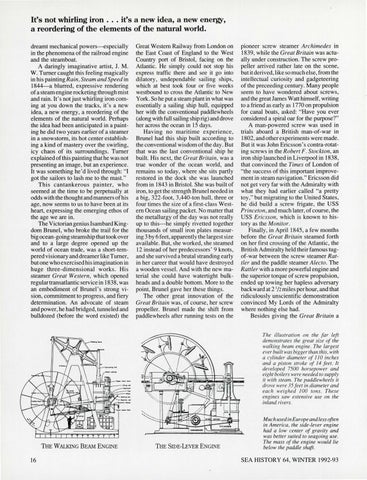 It&#39;s not whirling iron . .. it&#39;s a new idea, a new energy, a reordering of the elements of the natural world. dreamt mechanical powers-especially in the phenomena of the railroad engine and the steamboat. A daringly imaginative artist, J. M. W. Turner caught this feeling magically in his painting Rain, Steam and Speed in 1844--a blurred, expressive rendering of a steam engine rocketing through mist and rain. It&#39;s not just whirling iron coming at you down the tracks, it&#39;s a new idea, a new energy, a reordering of the elements of the natural world. Perhaps the idea had been anticipated in a painting he did two years earlier of a steamer in a snowstorm, its hot center establishing a kind of mastery over the swirling, icy chaos of its surroundings. Turner explained of this painting that he was not presenting an image, but an experience. It was something he &#39;d lived through: &quot;I got the sailors to lash me to the mast.&quot; This cantankerous painter, who seemed at the time to be perpetually at odds with the thought and manners of his age, now seems to us to have been at its heart, expressing the emerging ethos of the age we are in. The Victorian genius Isambard Kingdom Brunel, who broke the trail for the big ocean-going steamship thattook over and to a large degree opened up the world of ocean trade, was a short-tempered visionary and dreamer like Turner, but one who exercised his imagination in huge three-dimen sional works. His steamer Great Western, which opened regular transatlantic service in 1838, was an embodiment of Brunel&#39;s strong vision, commitment to progress, and fiery determination. An advocate of steam and power, he had bridged, tunneled and bulldozed (before the word existed) the

Great Western Railway from London on the East Coast of England to the West Country port of Bristol, facing on the Atlantic. He simply could not stop his express traffic there and see it go into dilatory, undependable sai ling ships , which at best took four or five weeks westbound to cross the Atlantic to New York. So he put a steam plant in what was essentially a sailing ship hull , equipped her with the conventional paddlewheels (along with full sailing ship rig) and drove her across the ocean in 15 days. Having no maritime experience, Brunel had this ship built according to the conventional wisdom of the day. But that was the last conventional ship he built. His next, the Great Britain, was a true wonder of the ocean world, and remains so today, where she sits partly restored in the dock she was launched from in 1843 in Bristol. She was built of iron, to get the strength Brunel needed in a big, 322-foot, 3,440-ton hull , three or four times the size of a first-class Western Ocean sailing packet. No matter that the metallurgy of the day was not really up to this-he simply rivetted together thousands of small iron plates measuring 3 by 6 feet, apparently the largest size available. But, she worked, she steamed 12 instead of her predecessors &#39; 9 knots, and she survived a brutal stranding early in her career that would have destroyed a wooden vessel. And with the new material she could have watertight bulkheads and a double bottom. More to the point, Brunel gave her these things. The other great innovation of the Great Britain was, of course, her screw propeller. Brunel made the shift from paddlewheels after running tests on the

pioneer screw steamer Archimedes in 1839, while the Great Britain was actually under construction. The screw propeller arrived rather late on the scene, but it derived, like so much else, from the intellectual curiosity and gadgeteering of the preceeding century. Many people seem to have wondered about screws, and the great James Watt himself, writing to a friend as early as 1770 on propulsion for canal boats, asked: &quot;Have you ever considered a spiral oar for the purpose?&quot; A man-powered screw was used in trials aboard a British man-of-war in 1802, and other experiments were made. But it was John Ericsson&#39;s contra-rotating screws in the Robert F. Stockton, an iron ship launched in Liverpool in 1838, that convinced the Times of London of &quot;the success of this important improvement in steam navigation.&quot; Ericsson did not get very far with the Admiralty with what they had earlier called &quot;a pretty toy,&quot; but migrating to the United States, he did build a screw frigate, the USS Princeton, and much later, of course, the USS Ericsson, which is known to history as the Monitor. Finally, in April 1845, a few months before the Great Britain steamed forth on her first crossing of the Atlantic, the British Admiralty held their famous tugof-war between the screw steamer Rattler and the paddle steamer Alecto. The Rattler with a more powerful engine and the superior torque of screw propulsion, ended up towing her hapless adversary backward at 2 1/2 miles per hour, and that ridiculously unscientific demonstration convinced My Lords of the Admiralty where nothing else had. Besides giving the Great Britain a Th e illustration on the far left demonstrates the great size of the walking beam engine. The largest ever built was bigger than this, with a cylinder diameter of 110 inches and a piston stroke of 14 f eet.Âˇ It developed 7500 horsepower and eight boilers were needed to supply it with steam. The paddlewheels it drove were 35 feet in diameter and each weighed JOO tons. These engines saw extensive use on the inland rivers.

Much used in Europe and less often in America, the side-lever engine had a low center of gravity and was better suited to seagoing use. The mass of the engine would lie below the paddle shaft.