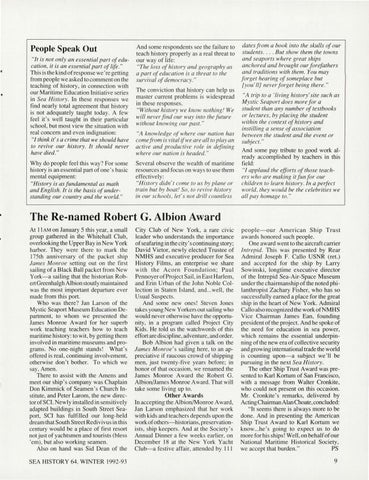 And some respondents see the failure to teach history properly as a real threat to our way of life: &quot;The loss of history and geography as a part of education is a threat to the survival of democracy.&quot;

&quot;It is not only an essential part of education, it is an essential part of life.&quot; This is the kind of response we &#39; re getting from people we asked to comment on the teaching of history, in connection with our Maritime Education Initiative series in Sea History. In these responses we find nearly total agreement that history is not adequately taught today. A few feel it &#39;s well taught in their particular school, but most view the situation with real concern and even indignation: &quot;I think it&#39;s a crime that we should have to revive our history. It should never have died.&quot;

Why do people feel this way? For some history is an essential part of one &#39; s basic mental eq uipment: &quot;History is as fundamental as math and English. It is the basis of understanding our country and the world.&quot;

Several observe the wealth of maritime resources and focus on ways to use them effectively: &quot;History didn &#39; t come to us by plane or train but by boat! So, to revive history in our schools, let&#39;s not drill countless

The conviction that history can help us master current problems is widespread in these responses. &quot;Without history we know nothing! We will never find our way into the future without knowing our past.&quot;

dates from a book into the skulls of our students . ... But show them the towns and seaports where great ships anchored and brought our forefathers and traditions with them. You may forget hearing of someplace but [you&#39; LL] never forget being there. &quot; &quot;A trip to a &#39;living history&#39; site such as Mystic Seaport does more for a student than any number of textbooks or lectures, by placing the student within the context of history and instilling a sense of association between the student and the event or subject. &quot; And some pay tribute to good work already accomplished by teachers in this field : &quot;I applaud the efforts of those teachers who are making it fun for our children to learn history. In a pe1fect world, they would be the celebrities we all pay homage to.&quot;

The Re-named Robert G. Albion Award At l lAM on January 5 this year, a small group gathered in the Whitehall Club, overlooking the Upper Bay in New York harbor. They were there to mark the l 75th ann iversary of the packet ship James Monroe setting out on the first sai ling of a Black Ball packet from New York-a sai ling that the historian RobertGreenhalgh Albion stoutly maintained was the most important departure ever made from this port. Who was there? Jan Larson of the Mystic Seaport Museum Education Department, to whom we presented the James Monroe A ward for her superb work teaching teachers how to teach maritime hi story: to wit, by getti ng them involved in maritime museums and programs. No one-night stands! What&#39;s offered is real , continuing invo lvement, otherwise don&#39;t bother. To which we say, Amen. There to assist with the Amens and meet our ship&#39; s company was Chaplain Don Kimmick of Seamen&#39;s Church Institute, and Peter Larom , the new director of SCI. Newly installed in sensitively adapted buildings in South Street Seaport, SCI has fulfill ed our long-held dream that South Street Rediviv us in this century would be a place of first resort not just of yachtsmen and tourists (bless &#39;em), but also working seamen . Also on hand was Sid Dean of the SEA HISTORY 64, WINTER 1992-93

City Club of New York , a rare civic leader who understands the importance of seafari ng in the city&#39;s continuing story; David Vietor, newly elected Trustee of NMHS and executive producer for Sea History Films, an enterprise we share wit h the Acorn Foundation ; Paul Pennoyerof Project Sai l, in East Harlem, and Erin Urban of the John Noble Collection in Staten Island, and ... well , the Usual Suspects. And some new ones! Steven Jones takes young New Yorkers out sailing who would never otherwise have the opportunity, in a program called Project City Kids. He told us the watchwords of this effort are discipline, adventure, and order. Bob Albion had g iven a talk on the James Monroe&#39;s sai ling here, to an appreciative if raucous crowd of shipping men, just twenty-five years before; in honor of that occasion, we renamed the James Monroe Award the Robert G. Albion/James Monroe A ward. That will take some li ving up to. Other A wards In accepti ng the Albion/Monroe Award, Jan Larson emphasized that her work with kids and teachers depends upon the work of others-historians, preservationists, ship keepers. And at the Society&#39;s Annual Dinner a few weeks earlier, on December 18 at the New York Yacht Club-a festive affair, attended by 111

people-our American Ship Trust awards honored such people. One award went to the aircraft carrier Intrepid. This was presented by Rear Admiral Joseph F. Callo USNR (ret. ) and accepted for the ship by Larry Sowinski, longtime executive director of the Intrepid Sea-Air-Space Museum under the chairmanship of the noted philanthropist Zachary Fisher, who has so successfully earned a place for the great ship in the heart of New York. Admiral Cal lo also recogni zed the work ofNMHS Vice Chairman James Ean, founding president of the project. And he spoke of the need for education in sea power, wh ich remains the essential underpinning of the new era of collective security and growing international trade the world is counting upon-a subject we &#39; ll be pursuing in the next Sea History. The other Ship Trust Award was presented to Karl Kortum of San Francisco, with a message from Walter Cronkite, who could not present on this occasion. Mr. Cronkite&#39;s remarks, delivered by Acting Chairman Alan Choate, concluded: &quot; It seemsÂˇ there is always more to be done. And in presenting the American Ship Trust Award to Karl Kortum we know ... he &#39;s going to expect us to do more for his ships! Well,on behalf of our National Maritime Historical Society, PS we accept that burden.&quot; 9