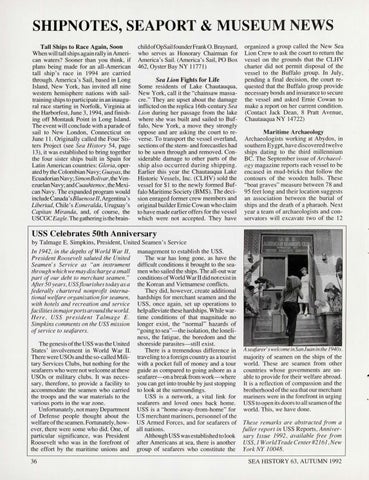 SHIPNOTES, SEAPORT &amp; MUSEUM NEWS Tall Ships to Race Again, Soon When will tall ships again rally in American waters? Sooner than you think, if plans being made for an all-American tall ship &#39;s race in 1994 are carried through. America&#39;s Sail, based in Long Island, New York, has invited all nine western hemisphere nations with sailtraining ships to participate in an inaugural race starting in Norfolk, Virginia at the Harborfest, June 3, 1994, and finishing off Montauk Point in Long Island. The event will conclude with a parade of sail to New London, Connecticut on June 11. Originally called the Four Sisters Project (see Sea History 54, page 13), it was established to bring together the four sister ships built in Spain for Latin American countries: Gloria, operated by the Colombian Navy; Guayas, the Ecuadorian Navy; Simon Bolivar, the Venezuelan Navy; andCuauhtemoc, the Mexican Navy. The expanded program would includeCanada&#39;s Bluenose ll,Argentina&#39;s Libertad, Chile&#39;s Esmeralda, Uruguay&#39;s Capitan Miranda, and, of course, the USCGCEagle. The gathering is the brain-

Sea Lion Fights for Life Some residents of Lake Chautauqua, New York, call it the &quot;chainsaw massacre.&quot; They are upset about the damage inflicted on the replica 16th-century Sea Lion during her passage from the lake where she was built and sailed to Buffalo, New York, a move they strongly oppose and are asking the court to reverse. To transport the vessel overland, sections of the stem- and forecastles had to be sawn through and removed. Considerable damage to other parts of the ship also occurred during shipping. Earlier this year the Chautauqua Lake Historic Vessels, Inc. (CLHV) sold the vessel for $1 to the newly formed Buffalo Maritime Society (BMS). The decision enraged former crew members and original builder Ernie Cowan who claim to have made earlier offers for the vessel which were not accepted. They have

organized a group called the New Sea Lion Crew to ask the court to return the vessel on the grounds that the CLHV charter did not permit disposal of the vessel to the Buffalo group. In July, pending a final decision, the court requested that the Buffalo group provide necessary bonds and insurance to secure the vessel and asked Ernie Cowan to make a report on her current condition. (Contact Jack Dean, 8 Pratt A venue, Chautauqua NY 14722) Maritime Archaeology Archaeologists working at Abydos, in southern Eygpt, have discovered twelve ships dating to the third millennium BC. The September issue of Archaeology magazine reports each vessel to be encased in mud-bricks that follow the contours of the wooden hulls . These &quot;boat graves&quot; measure between 78 and 95 feet long and their location suggests an association between the burial of ships and the death of a pharaoh. Next year a team of archaeologists and conservators will excavate two of the 12

In 1942 , in the depths of World War II, President Roosevelt saluted the United Seamen&#39;s Service as &quot;an instrument through which we may discharge a small part of our debt to merchant seamen.&quot; After 50 years , USS flourishes today as a federally chartered nonprofit international welfare organization for seamen, with hotels and recreation and service facilities in major ports around the world. H ere , USS president Talmage E. Simpkins comments on the USS mission of service to seafarers. The genesis of the USS was the United States&#39; involvement in World War II. There were USOs and the so-called Military Services Clubs, but nothing for the seafarers who were not welcome at these USOs or military clubs. It was necessary, therefore, to provide a facility to accommodate the seamen who carried the troops and the war materials to the various ports in the war zone. Unfortunately, not many Department of Defense people thought about the welfare of the seamen. Fortunate! y, however, there were some who did. One, of particular significance, was President Roosevelt who was in the forefront of the effort by the maritime unions and 36

management to establish the USS. The war has long gone, as have the difficult conditions it brought to the seamen who sailed the ships . The all-out war conditions of World War II did not exist in the Korean and Vietnamese conflicts. They did, however, create additional hardships for merchant seamen and the USS, once again, set up operations to help alleviate these hardships. While wartime conditions of that magnitude no longer exist, the &quot; normal&quot; hazards of &quot;going to sea&quot;-the isolation, the loneliness, the fatigue, the boredom and the shoreside parasites-still exist. There is a tremendous difference in A seafarer&#39;s welcome in San]uan in the 1940s. traveling to a foreign country as a tourist majority of seamen on the ships of the with a pocket full of money and a tour world. These are seamen from other guide as compared to going ashore as a countries whose governments are unseafarer---0n a break from work-where able to provide for their welfare abroad. you can get into trouble by just stopping It is a reflection of compassion and the brotherhood of the sea that our merchant to look at the surroundings. USS is a network, a vital link for mariners were in the forefront in urging seafarers and loved ones back home. USS to open its doors to all seamen of the USS is a &quot; home-away-from-home&quot; for world. This, we have done. US merchant mariners , personnel of the US Armed Forces, and for seafarers of These remarks are abstracted from a fuller report in USS Reports, Anniverall nation s. Although USS was established to look sary Issue 1992 , available free from after Americans at sea, there is another USS , l WorldTradeCenter#2161,New group of seafarers who constitute the York NY 10048. SEA HISTORY 63, AUTUMN 1992