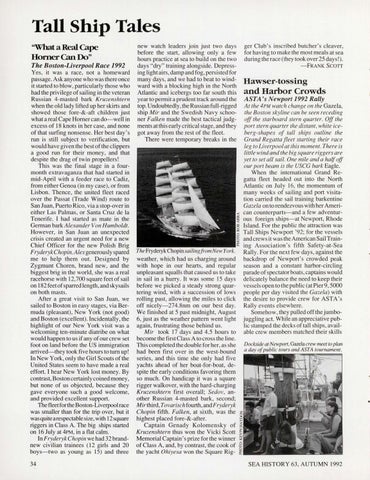 Tall Ship Tales &#39;&#39;What a Real Cape Horner Can Do&quot; The Boston-Liverpool Race 1992 Yes, it was a race, not a homeward passage. Ask anyone who was there once it started to blow, particularly those who had the privilege of sailing in the veteran Russ ian 4-masted bark Kruzenshtern when the old lady lifted up her skirts and showed those fore-&amp;-aft children just what a real Cape Homer can do--well in excess of 18 knots in her case, and none of that surfing nonsense. Her best day&#39;s run is still subject to verification, but would have given the best of the clippers a good run for their money, and that despite the drag of twin propellers! This was the final stage in a fourmonth extravaganza that had started in mid-April with a feeder race to Cadiz, from either Genoa (in my case), or from Lisbon. Thence, the united fleet raced over the Passat (Trade Wind) route to San Juan, Puerto Rico, via a stop-over in either Las Palmas, or Santa Cruz de la Tenerife. I had started as mate in the German bark Alexander Von Humboldt. However, in San Juan an unexpected crisis created an urgent need for a new Chief Officer for the new Polish Brig FryderykChopin.Alexgenerously spared me to help them out. Designed by Zygmunt Choren, brand new, and the biggest brig in the world, she was a real racehorse with 12,700 square feet of sail on 182 feet of sparred length, and skysails on both masts. After a great visit to San Juan, we sailed to Boston in easy stages, via Bermuda (pleasant), New York (not good) and Boston (excellent). Incidentally, the highlight of our New York visit was a welcoming ten-minute diatribe on what would happen to us if any of our crew set foot on land before the US immigration arrived-they took five hours to tum up! In New York, only the Girl Scouts of the United States seem to have made a real effort. I hear New York lost money. By contrast, Boston certainly coined money, but none of us objected, because they gave everyone such a good welcome, and provided excellent support. ThefleetfortheBoston-Liverpoolrace was smaller than for the trip over, but it was quite a respectable size, with 12 square riggers in Class A. The big ships started on 16 July at 4PM, in a flat calm. In FryderykChopin wehad32 brandnew civilian trainees (12 girls and 20 boys-two as young as 15) and three 34

new watch leaders join just two days before the start, allowing only a few hours practice at sea to build on the two days &quot;dry&quot; training alongside. Depressing light airs, damp and fog, persisted for many days, and we had to beat to windward with a blocking high in the North Atlantic and icebergs too far south this year to permit a prudent track around the top. Undoubtedly, the Russian full-rigged ship Mir and the Swedish Navy schooner Falken made the best tactical judgments at this early critical stage, and they got away from the rest of the fleet. There were temporary breaks in the

ger Club&#39;s inscribed butcher&#39;s cleaver, for having to make the most meals at sea during the race (they tookover25 days!) . -FRANK SCOTT

At the 4PM watch change on the Gazela, the Boston skyline can be seen receding off the starboard stern quarter. Off the port stern quarter the distant, white iceberg-shapes of tall ships outline the Grand Regatta fleet starting their race leg to Liverpool at this moment. There is little wind and the big square riggers are yet to set all sail. One mile and a half off our port beam is the USCG bark Eagle. When the international Grand Regatta fleet headed out into the North Atlantic on July 16, the momentum of many weeks of sailing and port visitation carried the sail training barkentine Gaze la on to rendezvous with her American counterparts-and a few adventurous foreign ships-at Newport, Rhode Island. For the public the attraction was Tall Ships Newport &#39;92; for the vessels and crews it was the American Sail Training Association&#39;s fifth Safety-at-Sea The Fryderyk Chopin sailingfromNew York. Rally. For the next few days, against the weather, which had us charging around backdrop of Newport&#39;s crowded peak with hope in our hearts, and regular season and a constant harbor-circling unpleasant squalls that caused us to take parade of spectator boats, captains would in sail in a hurry. It was some 15 days delicately balance the need to keep their before we picked a steady strong quar- vessels open to the public (at Pier 9, 5000 tering wind, with a succession of lows . people per day visited the Gaze/a) with rolling past, allowing the miles to click the desire to provide crew for ASTA&#39;s off nicely-274.8nm on our best day. Rally events elsewhere. We finished at 5 past midnight, August Somehow, they pulled off the jumbo6, just as the weather pattern went light juggling act. While an appreciative public stamped the decks of tall ships, availagain , frustrating those behind us. Mir took 17 days and 4.5 hours to able crew members matched their skills become the first Class A to cross the 1ine. This completed the double for her, as she Dockside at Newport, Gaz.ela crew meet to plan had been first over in the west-bound a day of public tours and ASTA tournament. series, and this time she only had five yachts ahead of her boat-for-boat, despite the early conditions favoring them so much. On handicap it was a square rigger walkover, with the hard-charging Kruzenshtern first overall; Sedov, another Russian 4-masted bark, second; Mir third, Tovarischfourth, andFryderyk Chopin fifth. Falken, at sixth, was the z highest placed fore-&amp;-after. ~ Captain Genady Kolomen sky of :f Kruzenshtern thus won the Vicki Scott ~ Memorial Captain&#39;s prize for the winner ~ Âˇ of Class A, and, by contrast, the cook of the yacht Ohiyesa won the Square Rig- at: