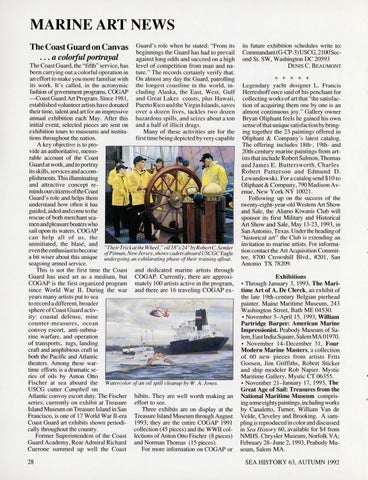 Guard&#39;s role when he stated: &quot;From its beginnings the Guard has had to prevail against long odds and succeed on a high level of competition from man and nature.&quot; The records certainly verify that. On almost any day the Guard, patrolling the longest coastline in the world, including Alaska, the East, West, Gulf and Great Lakes coasts, plus Hawaii, Puerto Rico and the Virgin Islands, saves over a dozen lives, tackles two dozen hazardous spills, and seizes about a ton and a half of illicit drugs. Many of these activities are for the first time being depicted by very capable

The Coast Guard, the &quot;fifth&quot; service, has been carrying out a colorful operation in an effort to make you more familiar with its work. It&#39; s called, in the acronymic fashion of government programs, COGAP -Coast Guard Art Program. Since 1981, established volunteer artists have donated their time, talent and art for an impressive annual exhibition each May. After this initial event, selected pieces are sent on exhibition tours to museums and institutions throughout the nation. A key objective is to provide an authoritative, memorable account of the Coast Guard at work, and to portray its skills, services and accomplishments. This illuminating and attractive concept remindsourcitizensoftheCoast Guard &#39;s role and helps them understand how often it has guided, aided and come to the rescue of both merchant seamen and pleasure boaters who sail upon its waters. COGAP can help all of us , the uninitiated, the blase, and &quot;Their Trick at the Wheel,&quot; oill8&quot;x 24 &quot; by RobertC.Semler even the enthusiast to become of Pitman, New Jersey, shows cadets aboard USCGC Eagle a bit wiser about this unique undergoing an exhilarating phase of their training afloat. seagoing armed service. This is not the first time the Coast and dedicated marine artists through Guard has used art as a medium, but COGAP. Currently, there are approxiCOGAP is the first organized program mately I 00 artists active in the program, since World War II. During the war and there are 16 traveling COGAP exyears many artists put to sea to record a different, broader sphere of Coast Guard activity: coastal defense, mine .. counter-measures , ocean &quot;&#39; .. --:!:1 convoy escort, anti-subma-I&#39;_ ...-;...,...I . . T 0&#39; ~rine warfare, and operation of transports, tugs , landing craft and amphibious craft in both the Pacific and Atlantic theaters. Among these wartime efforts is a dramatic series of oils by Anton Otto Fischer at sea aboard the Watercolor of an oil spill cleanup by W. A. Jones. USCG cutter Campbell on Atlantic convoy escort duty. The Fischer hibits. They are well worth making an series, currently on exhibit at Treasure effort to see. Island Museum on Treasure Island in San Three exhibits are on display at the Francisco, is one of 17 World War II-era Treasure Island Museum through August Coast Guard art exhibits shown periodi- 1993; they are the entire COGAP 1991 cally throughout the country. collection (45 pieces) and the WWII colFormer Superintendent of the Coast lections of Anton Otto Fischer (8 pieces) Guard Academy, Rear Admiral Richard and Norman Thomas (15 pieces). Cuerone summed up well the Coast For more information on COGAP or