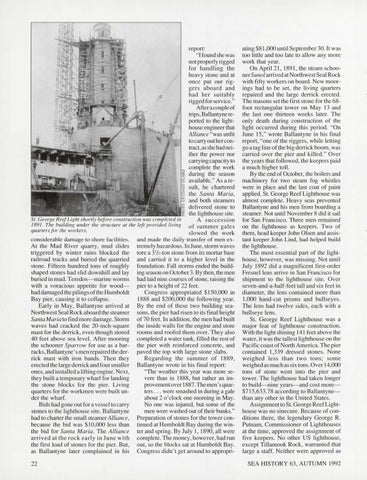 report: &quot;I found she was not properly rigged for handling the heavy stone and at once put our riggers aboard and had her suitably rigged for service.&quot; After a couple of trips, Ballantyne reported to the lighthouse engineer that Alliance &quot;was unfit to carry out her contract, as she had neither the power nor carrying capacity to complete the work during the season available.&quot; As a result, he chartered the Santa Maria, and both steamers delivered stone to ~ :i: the lighthouse site. 0.. St. George Reef Light shortly before construction was completed in A succession 1891. The building under the structure at the left provided living of summer gales quarters for the workers. slowed the work considerable damage to shore facilities. and made the daily transfer of men exAt the Mad River quarry, mud slides treme! y hazardous. In June, storm waves triggered by winter rains blocked the tore a 3 &#39;h-ton stone from its mortar base railroad tracks and buried the quarried and carried it to a higher level in the stone. Fifteen hundred tons of roughly foundation. Fall storms ended the buildshaped stones had slid downhill and lay ing season on October3. By then, the men buried in mud. Teredos-marine worms had laid nine courses of stone, raising the with a voracious appetite for woodpier to a height of 22 feet. had damaged the pilings of the Humboldt Congress appropriated $150,000 in Bay pier, causing it to collapse. 1888 and $200,000 the following year. Early in May, Ballantyne arrived at By the end of these two building seaNorthwest Seal Rock aboard the steamer sons, the pier had risen to its final height Santa Maria to find more damage. Storm of70 feet. In addition, the men had built waves had cracked the 20-inch-square the inside walls for the engine and store mast for the derrick, even though stored rooms and roofed them over. They also 40 feet above sea level. After mooring completed a water tank, filled the rest of the schooner Sparrow for use as a bar- the pier with reinforced concrete, and racks, Ballantyne&#39; s men repaired the der- paved the top with large stone slabs. Regarding the summer of 1889, rick mast with iron bands. Then they erected the large derrick and four smaller Ballantyne wrote in his final report: &quot;The weather this year was more seones, and installed a lifting engine. Next, vere than in 1888, but rather an imthey built a temporary wharf for landing provementover 1887. The men&#39;s quarthe stone blocks for the pier. Living ters ... were smashed in during a gale quarters for the workmen were built unabout 2 o&#39;clock one morning in May. der the wharf. No one was injured, but some of the Bids had gone out for a vessel to carry men were washed out of their bunks.&quot; stones to the lighthouse site. Ballantyne had to charter the small steamer Alliance, Preparation of stones for the tower conbecause the bid was $10,000 less than tinued at Humboldt Bay during the winthe bid for Santa Maria. The Alliance ter and spring. By July 1, 1890, all were arrived at the rock early in June with complete. The money, however, had run the first load of stones for the pier. But, out, so the blocks sat at Humboldt Bay. as Ballantyne later complained in his Congress didn &#39; t get around to appropri22

ating $81,000 until September 30. It was too little and too late to allow any more work that year. On April 21, 1891, the steam schoonerSunol arrived at Northwest Seal Rock with fifty workers on board. New moorings had to be set, the living quarters repaired and the large derrick erected. The masons set the first stone for the 68foot rectangular tower on May 13 and the last one thirteen weeks later. The only death during construction of the light occurred during this period. &quot;On June 15,&quot; wrote Ballantyne in his final report, &quot;one of the riggers, while letting go a tag line of the big derrick boom, was carried over the pier and killed.&quot; Over the years that followed, the keepers paid a much higher toll. By the end of October, the boilers and machinery for two steam fog whistles were in place and the last coat of paint applied. St. George Reef Lighthouse was almost complete. Heavy seas prevented Ballantyne and his men from boarding a steamer. Not until November 8 did it sail for San Francisco. Three men remained on the lighthouse as keepers. Two of them, head keeper John Olsen and assistant keeper John Lind, had helped build the lighthouse. The most essential part of the lighthouse, however, was missing. Not until July 1892 did a magnificent first-order Fresnel lens arrive in San Francisco for shipment to the lighthouse site. Over seven-and-a-half-feet tall and six feet in diameter, the lens contained more than 1,000 hand-cut prisms and bullseyes. The lens had twelve sides, each with a bullseye lens. St. George Reef Lighthouse was a major feat of lighthouse construction. With the light shining 141 feet above the water, it was the tallest lighthouse on the Pacific coast of North America. The pier contained 1,339 dressed stones. None weighed less than two tons; some weighed as much as six tons. Over 14,000 tons of stone went into the pier and tower. The lighthouse had taken longer to build-nine years-and cost more$715,633. 78 according to Ballantynethan any other in the United States. Assignment to St. George ReefLighthouse was no sinecure. Because of conditions there, the legendary George R. Putnam, Commissioner of Lighthouses at the time, approved the assignment of five keepers. No other US lighthouse, except Tillamook Rock, warranted that large a staff. Neither were approved as SEA HISTORY 63, AUTUMN 1992