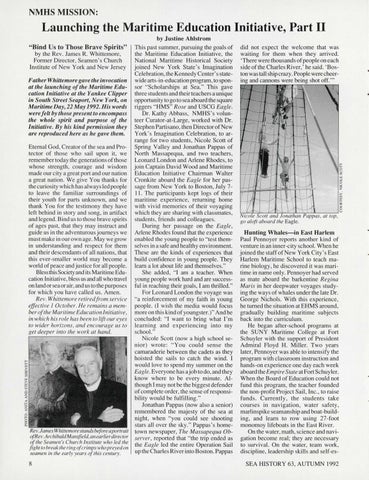 Launching the Maritime Education Initiative, Part II by Justine Ahlstrom This past summer, pursuing the goals of by the Rev. James R. Whittemore, the Maritime Education Initiative, the Former Director, Seamen's Church National Maritime Historical Society Institute of New York and New Jersey joined New York State's Imagination Celebration, the Kennedy Center's stateFather Whittemore gave the invocation wide arts-in-education program, to sponat the launching of the Maritime Edu- sor "Scholarships at Sea." This gave cation Initiative at the Yankee Clipper three students and their teachers a unique in South Street Seaport, New York, on opportunity to go to sea aboard the square Maritime Day, 22May1992. His words riggers "HMS" Rose and USCG Eagle. Dr. Kathy Abbass, NMHS's volunwere felt by those present to encompass the whole spirit and purpose of the teer Curator-at-Large, worked with Dr. Initiative. By his kind permission they Stephen Partisano, then Director of New York 's Imagination Celebration, to arare reproduced here as he gave them. range for two students, Nicole Scott of Eternal God, Creator of the sea and Pro- Spring Valley and Jonathan Pappas of tector of those who sail upon it, we North Massapequa, and two teachers, remember today the generations of those Leonard London and Arlene Rhodes, to whose strength, courage and wisdom join Captain David Wood and Maritime made our city a great port and our nation Education Initiative Chairman Walter a great nation. We give You thanks for Cronkite aboard the Eagle for her pasthe curiosity which has always led people sage from New York to Boston, July 7to leave the familiar surroundings of 11 . The participants kept logs of their their youth for parts unknown , and we maritime ex perience, returning home thank You for the testimony they have with vivid memories of their voyaging left behind in story arid song, in artifact which they are sharing with classmates, and legend. Bind us to those brave spirits students, friends and colleagues. of ages past, that they may instruct and During her passage on the Eagle, guide us in the adventurous journeys we Arlene Rhodes found that the experience must make in our own age. May we grow enabled the young people to "test themin understanding and respect for them selves in a safe and healthy environment. and their descendants of all nations, that These are the kinds of experiences that thi s ever-smaller world may become a build confidence in young people. They world of peace and justice for all people. learn a lot about life and themselves." Bless this Society and its Mari time EduShe added, "I am a teacher. When cation Initiative, bless us and all who travel young people work hard and are successon landor seaorair, and us to the purposes ful in reaching their goals, I am thrilled." for which you have called us. Amen . For Leonard London the voyage was Rev. Whittemore retired from service "a reinforcement of my faith in young effective 1 October. He remains a mem- people. (I wish the media would focus ber ofthe Maritime Education Initiative, more on this kind of youngster.)" And he in which his role has been to lift our eyes concluded: "I want to bring what I'm to wider horizons, and encourage us to learnin g and experiencing into my get deeper into the work at hand. school. " Nicole Scott (now a high school senior) wrote: "Yo u could sense the camaraderie between the cadets as they hoi sted the sails to catch the wind. I would love to spend my summer on the Eagle. Everyone has a job to do, and they know where to be every minute. Although I may not be the biggest defender of complete order, the sense of responsibility would be fulfilling. " Jonathan Pappas (now also a senior) remembered the majesty of the sea at night, when "you could see shooting stars all over the sky." Pappas's homeRev. James Whittemore stands before a portrait town newspaper, The Massapequa ObofRev.ArchibaldMansfield,anearlierdirector server, reported that "the trip ended as of the Seamen's Church Institute who led the the Eagle led the entire Operation Sail fight to break the ring ofcrimps who preyed on up the Charles River into Boston. Pappas seamen in the early years of this century.

"Bind Us to Those Brave Spirits"

did not expect the welcome that was waiting for them when they arrived. 'There were thousands of people on each side of the Charles River,' he said. 'Boston was tall ship crazy. People were cheering and cannons were being shot off."'

1 Nicole Scott and Jonathan Pappas , at top, go aloft aboard the Eagle.

Hunting Whales-in East Harlem Paul Pennoyer reports another kind of venture in an inner-city school. When he joined the staff of New York City's East Harlem Maritime School to teach marine biology, he discovered it was maritime in name only. Pennoyer had served as mate aboard the barkentine Regina Maris in her deepwater voyages studying the ways of whales under the late Dr. George Nichols. With this experience, he turned the situation at EHMS around, gradually building maritime subjects back into the curriculum. He began after-school programs at the SUNY Maritime College at Fort Schuyler with the support of President Admiral Floyd H. Miller. Two years later, Pennoyer was able to intensify the program with classroom instruction and hands-on experience one day each week aboard the Empire State at Fort Schuyler. When the Board of Education could not fund this program, the teacher founded the non-profit Project Sail, Inc. , to raise funds . Currently, the students take courses in navigation , water safety, marlinspike seamanship and boat-building, and learn to row using 27-foot monomoy lifeboats in the East River. On the water, math, science and navigation become real; they are necessary to survival. On the water, team work, discipline, leadership skills and self-esSEA HISTORY 63, AUTUMN 1992