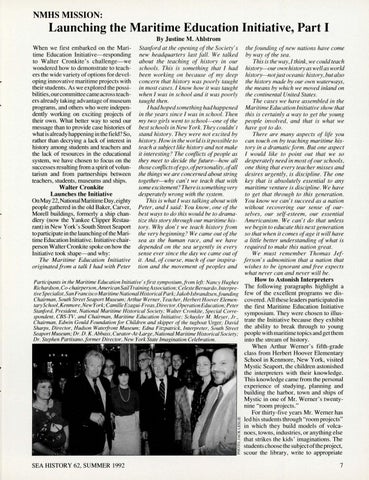 Launching the Maritime Education Initiative, Part I By Justine M. Ahlstrom Stanford at the opening of the Society&#39; s the founding of new nations have come new headquarters last fall. We talked by way of the sea. about the teaching of history in our This is the way, I think, we could teach schools. This is something that I had history-our own history as well as world been working on because of my deep history----notjust oceanic history, but also concern that history was poorly taught the history made by our own waterways, in most cases. I know how it was taught the means by which we moved inland on when I was in school and it was poorly the continental United States. The cases we have assembled in the taught then. I had hoped something had happened Maritime Education Initiative show that in the years since I was in school. Then this is certainly a way to get the young my two girls went to school--one of the people involved, and that is what we best schools in New York. They couldn&#39;t have got to do. stand history. They were not excited by There are many aspects of life you history. How in the world is it possible to can touch on by teaching maritime histeach a subject like histmy and not make tory in a dramatic form. But one aspect it interesting? The conflicts of people as I would like to point out that we so they meet to decide the future-how all desperately need in most of our schools, those conflicts ofego, ofpersonality, ofall one thing that every teacher misses and the things we are concerned about string desires urgently, is discipline. The one together-why can&#39;t we teach that with key that is absolutely essential to any some excitement? There is something very maritime venture is discipline. We have desperately wrong with the system. to get that through to this generation. This is what I was talking about with You know we can&#39; t succeed as a nation Peter, and I said: You know, one of the without recovering our sense of ourbest ways to do this would be to drama- selves, our self-esteem, our essential tize this story through our maritime his- Americanism. We can&#39; t do that unless tory. Why don&#39; t we teach history from we begin to educate this next generation the very beginning ? We came out of the so that when it comes of age it will have sea as the human race, and we have a little better understanding of what is depended on the sea urgently in every required to make this nation great. We must remember Thomas Jefsense ever since the day we came out of it. And, of course, much of our inspira- ferson&#39;s admonition that a nation that tion and the movement of peoples and wishes to be ignorant and jiÂˇee expects what never can and never will be. How to Astonish Interpreters Participants in the Maritime Education Initiative&#39;s first symposium, from left: Nancy Hughes Richardson, Co-chairperson, American Sail Training Association; Celeste Bernardo, Interpre- The following paragraphs highlight a tive Specialist, San Francisco Maritime National Historical Park; Jakob lsbrandtsen,founding few of the excellent programs we disChairman, South Street Seaport Museum; Arthur Werner, Teacher, Herbert Hoover Elemen- covered. All these leaders participated in tG1ySchool, Kenmore ,New York; Camille Ezagui-Freas, Director, Operation Education; Peter the first Maritime Education Initiative Stanford, President, National Maritime Historical Society; Walter Cronkite, Special Corre- symposium. They were chosen to illusspondent, CBS-TV, and Chairman, Maritime Education Initiative; Schuyler M. Meyer, Jr. , Chairman, Edwin Gould Foundation for Children and skipper of the tugboat Urger; David trate the Initiative because they exhibit Sharps, Director, Hudson Wate1front Museum ; Edna Fitzpatrick, Interpreter, South Street the abi lity to break through to young Seaport Museum; Dr. D. K. Abbass, Curator-At-Large, National Maritime Historical Society; people with maritime topics and get them Dr. Stephen Partisano.former Director, New York State Imagination Celebration . into the stream of history. When Arthur Werner&#39;s fifth-grade class from Herbert Hoover Elementary School in Kenmore, New York, visited Mystic Seaport, the children astonished the interpreters with their knowledge. This knowledge came from the personal experience of studying, planning and building the harbor, town and ships of Mystic in one of Mr. Werner&#39;s twentynine &quot;room projects.&quot; For thirty-five years Mr. Werner has led his students through &quot;room projects&quot; in which they build models of volcanoes, towns, industries, or anything else that strikes the kids &#39; imaginations. The students choose the subject of the project, scour the library, write to appropriate

When we first embarked on the Maritime Education Initiative-responding to Walter Cronkite&#39;s challenge-we wondered how to demonstrate to teachers the wide variety of options for developing innovative maritime projects with their students. As we explored the possibilities, our committee came across teachers already taking advantage of museum programs, and others who were independently working on exciting projects of their own. What better way to send our message than to provide case histories of what is already happening in the field? So, rather than decrying a lack of interest in history among students and teachers and the lack of resources in the educational system, we have chosen to focus on the successes resulting from a spirit of voluntarism and from partnerships between teachers, students, museums and ships. Walter Cronkite Launches the Initiative OnMay22,NationalMaritimeDay,eighty people gathered in the old Baker, Carver, Morell buildings, formerly a ship chandlery (now the Yankee Clipper Restaurant) in New York&#39;s South Street Seaport to participate in the launching of the Maritime Education Initiative. Initiative chairperson Walter Cronkite spoke on how the Initiative took shape-and why: The Maritime Education Initiative originated from a talk I had with Peter