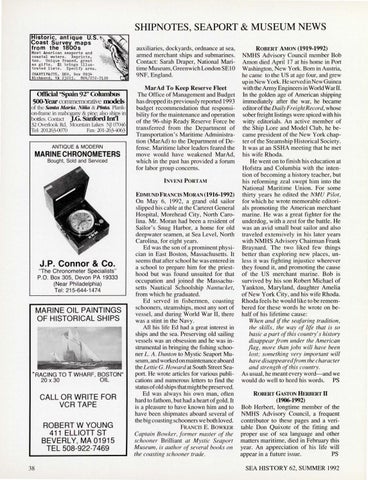 auxiliaries, dockyards, ordnance at sea, armed merchant ships and submarines. Contact: Sarah Draper, National Maritime Museum, Greenwich London SElO 9NF, England. Mar Ad To Keep Reserve Fleet The Office of Management and Budget has dropped its previous! y reported 1993 budget recommendation that responsibility for the maintenance and operation of the 96-ship Ready Reserve Force be transferred from the Department of Transportation's Maritime Administration (MarAd) to the Department of Defense. Maritime labor leaders feared the move would have weakened MarAd , which in the past has provided a forum for labor group concerns. I NVENI PORTAM EDMUND FRANCIS MORAN (1916-1992)

On May 6, 1992, a grand old sailor slipped hi s cable at the Carteret General Hospital , Morehead City , North Carolina. Mr. Moran had been a res ident of Sailor' s Snug Harbor, a home for old deepwater seamen, at Sea Level , North Carolina, for eight years. Ed was the son of a prominent physician in East Boston, Massachusetts. It seems that after school he was entered in a school to prepare him for the priesthood but was found unsuited for that occupation and joined the Massachusetts Nautical Schoolship Nantucket, from which he graduated. Ed served in fishermen , coasting schooners, steam ships, most any sort of vessel, and during World War II, there was a stint in the Navy. All his life Ed had a great interest in ships and the sea. Preserving old sailing vessels was an obsession and he was instrumental in bringing the fishing schooner L.A. Dunton to Mystic Seaport Museum, and worked on maintenance aboard the Lettie G. Howard at South Street Seaport. He wrote articles for various publications and numerous letters to find the status ofold ships that might be preserved. Ed was always his own man, often hard to fathom , but had a heart of gold. It is a pleasure to have known him and to have been shipmates aboard several of the big coasting schooners we both loved. FRANCIS E. BOWKER Captain Bowker, former master of the schooner Brilliant at Mystic Seaport Museum, is author of several books on the coasting schooner trade.

NMHS Advisory Council member Bob Amon died April 17 at his home in Port Washington , New York. Born in Austria, he came to the US at age four, and grew up in New York. He served in New Guinea with the Arm y Engineers in World War II. In the golden age of American shipping immediately after the war, he became editorof the Daily Freight Record, whose sober freight listings were spiced with hi s witty editorials. An active member of the Ship Lore and Model Club, he became preside nt of the New York chapter of the Steamship Hi storical Society. It was at an SSHA meeting that he met his wife Rhoda. He went on to finish his education at Hofstra and Columbia with the intention of becoming a hi story teacher, but his reforming zeal swept him into the National Maritime Union . For some thirty years he edited the NMU Pilot, for which he wrote memorable editorials promoting the American merchant marine. He was a great fighter for the underdog, with a zest for the battle. He was an avid small boat sailor and also traveled extensively in hi s later years with NMHS Advisory Chairman Frank Braynard. The two liked few things better than exploring new places, unless it was fighting inju stice wherever they found it, and promoting the cause of the US merchant marine. Bob is survived by his son Robert Michael of Yankton, Maryland, daughter Amelia of New York City, and hi s wife Rhoda. Rhoda feels he would like to be remembered for these words he wrote on behalf of his lifetime cause:

When and if the seafaring tradition , the skills, the way of life that is so basic a part of this country's history disappear from under the American flag, more than j obs will have been lost; something very important will have disappeared from the character and strength of this country.

As usual, he meant every word-and we would do well to heed his words. PS ROBERT GASTON HERBERT II

(1906-1992) Bob Herbe rt, longtime member of the NMHS Advisory Council, a frequent contributor to these pages and a veritable Don Quixote of the fitting and proper use of sea language and other matters maritime, died in February this year. An apprec iation of his life will appear in a future issue. PS SEA HISTORY 62, SUMMER 1992