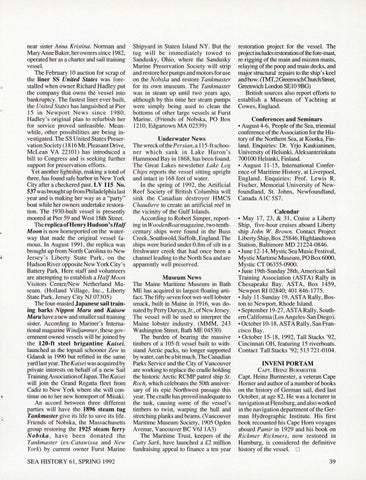 near sister Anna Kristina. Norman and Mary Anne Baker, herowners since 1982, operated her as a charter and sail training vessel. The February 10 auction for scrap of the liner SS United States was forestalled when owner Richard Hadley put the company that owns the vessel into bankruptcy. The fastest liner ever built, the United States has languished at Pier 15 in Newport News since 1980. Hadley &#39; s original plan to refurbish her for service proved unfeasible. Meanwhile, other possibilities are being investigated. The SS United States Preservation Society (1816Mt. Pleasant Drive, McLean VA 22101) has introduced a bill to Congress and is seeking further support for preservation efforts. Yet another lightship, making a total of three, has found safe harbor in New York City after a checkered past. L V 115 No. 537 was brought up from Philadelphia last year and is making her way as a &quot;party&quot; boat while her owners undertake restoration. The 1930-built vessel is presently moored at Pier 59 and West 18th Street. ThereplicaofHenryHudson&#39;sHalf Moon is now homeported on the waterway that made the original vessel famous. In August 1991, the replica was brought up from North Carolina to New Jersey&#39;s Liberty State Park, on the Hudson River opposite New York City&#39;s Battery Park. Here staff and volunteers are attempting to establish a Half Moon Visitors Center/New Netherland Museum. (Holland Village, Inc., Liberty State Park, Jersey City NJ 07305) The four-masted Japanese sail training barks Nippon Maru and Kaisow Maru have a new and smaller sail training sister. According to Mariner&#39;s International magazine Windjammer, these government owned vessels will be joined by the 120-ft steel brigantine Kaisei, launched as the topsail schooner Zew in Gdansk in 1990 but refitted in the same yard last year. The Kaisei was acquired by private interests on behalf of a new Sail Training Association ofJ apan. TheKaisei will join the Grand Regatta fleet from Cadiz to New York where she will continue on to her new homeport of Misaki. An accord between three different parties will have the 1896 steam tug Tankmaster give its life to save its life. Friends of Nobska, the Massachusetts group restoring the 1925 steam ferry Nobska, have been donated the Tankmaster (ex-Catawissa and New York) by current owner Furst Marine SEA HISTORY 61, SPRING 1992

Shipyard in Staten Island NY. But the tug will be immediately towed to Sandusky, Ohio, where the Sandusky Marine Preservation Society will strip and restore her pumps and motors for use on the Nobska and restore Tankmaster for its own museum. The Tankmaster was in steam up until two years ago, although by this time her steam pumps were simply being used to clean the bottoms of other large vessels at Furst Marine. (Friends of Nobska, PO Box 1210, Edgartown MA 02539) Underwater News ThewreckofthePersian, a 115-ftschooner which sank in Lake Huron&#39;s Hammond Bay in 1868, has been found. The Great Lakes newsletter Lake Log Chips reports the vessel sitting upright and intact in 168 feet of water. In the spring of 1992, the Artificial Reef Society of British Columbia will sink the Canadian destroyer HMCS Chaudiere to create an artificial reef in the vicinity of the Gulf Islands. According to Robert Simper, reporting in WoodenBoatmagazine , twotenthcentury ships were found in the Buss Creek, South wold, Suffolk, England. The ships were buried under 0.8m of silt in a freshwater creek that had once been a channel leading to the North Sea and are apparently well preserved. Museum News The Maine Maritime Museum in Bath ME has acquired its largest floating artifact. The fifty-seven foot wet-well lobster smack, built in Maine in 1916, was donated by Perry Duryea, Jr., of New Jersey. The vessel will be used to interpret the Maine lobster industry. (MMM, 243 Washington Street, Bath ME 04530) The burden of bearing the massive timbers of a 105-ft vessel built to withstand Arctic packs, no longer supported by water, can be a bit much. The Canadian Parks Service and the City of Vancouver are working to replace the cradle holding the historic Arctic RCMP patrol ship St. Roch, which celebrates the 50th anniversary of its epic Northwest passage this year. The cradle has proved inadequate to the task, causing some of the vessel&#39;s timbers to twist, warping the hull and stretching planks and beams. (Vancouver Maritime Museum Society, 1905 Ogden Avenue, Vancouver BC V6J 1A3) The Maritime Trust, keepers of the Cutty Sark, have launched a £2 million fundraising appeal to finance a ten year

Capt. Heinz Burmester, a veteran Cape Homer and author of a number of books on the history of German sail, died last October, at age 82. He was a lecturer in navigation at Flensburg, and also worked in the navigation department of the German Hydrographic Institute. His first book recounted his Cape Hom voyages aboard Pamir in 1929 and his book on Rickmer Rickmers, now restored in Hamburg, is considered the definitive history of the vessel. D 39