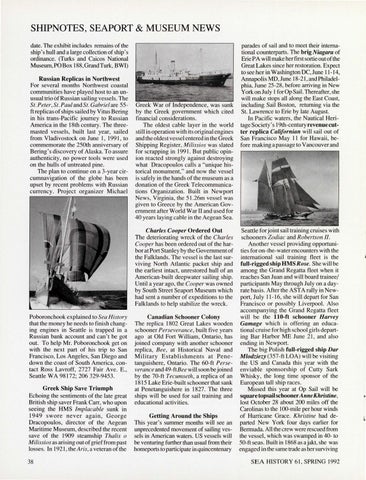 SHIPNOTES, SEAPORT &amp; MUSEUM NEWS date. The exhibit includes remains of the ship&#39;s hull and a large collection of ship &#39;s ordinance. (Turks and Caicos National Museum, PO Box 188, Grand Turk, BWI) Russian Replicas in Northwest For several months Northwest coastal communities have played host to an unusual trio bf Russian sailing vessels. The St. Peter,St.PaulandSt. Gabriel are 55ftreplicas of ships sailed by Vitus Bering in his trans-Pacific journey to Russian America in the 18th century. The threemasted vessels, built last year, sailed from Vladivostock on June 1, 1991 , to commemorate the 250th anniversary of Bering&#39;s discovery of Alaska. To assure authenticity, no power tools were used on the hulls of untreated pine. The plan to continue on a 3-year circumnavigation of the globe has been upset by recent problems with Russian currency. Project organizer Michael

Greek War of Independence, was sunk by the Greek government which cited financial considerations. The oldest cable layer in the world still in operation with its original engines and the oldest vessel entered in the Greek Shipping Register, Milissios was slated for scrapping in 1991. But public opinion reacted strongly against destroying what Dracopoulos calls a &quot; unique historical monument,&quot; and now the vessel is safely in the hands of the museum as a donation of the Greek Telecommunications Organization. Built in Newport News , Virginia, the 5 l .26m vessel was given to Greece by the American Government after World War II and used for 40 years laying cable in the Aegean Sea.

Charles Cooper Ordered Out The deteriorating wreck of the Charles Cooper has been ordered out of the harbor at Port Stanley by the Government of the Falklands. The vessel is the last surviving North Atlantic packet ship and the earliest intact, unrestored hull of an American-built deepwater sai ling ship. Until a year ago, the Cooper was owned by South Street Seaport Museum which had sent a number of expeditions to the Falklands to help stabilize the wreck. Poboronchook explained to Sea History that the money he needs to finish changing engines in Seattle is trapped in a Russian bank account and can&#39;t be got out. To help Mr. Poboronchook get on with the next part of his trip to San Francisco, Los Angeles, San Diego and down the coast of South America, contact Ross Lavroff, 2727 Fair Ave. E., Seattle WA 98172; 206 329-9453. Greek Ship Save Triumph Echoing the sentiments of the late great British ship saver Frank Carr, who upon seeing the HMS Implacable sunk in 1949 swo re never again, George Dracopoulos , director of the Aegean Maritime Museum, described the recent save of the 1909 steamship Thalis o M ilissios as arising out of grief from past losses. In 192 l, the Aris, a veteran of the 38

Canadian Schooner Colony The replica 1802 Great Lakes wooden schooner Perseverance, built five years ago at Old Fort William, Ontario, has joined company with another schooner replica, Bee, at Historical Naval and Military Establishments at Penetanguishere, Ontario. The 60-ft Perseverance and 49-ftBee will soon be joined by the 70-ft Tecumseth, a replica of an 1815 Lake Erie-built schooner that sank at Penetanguishere in 1827. The three ships will be used for sail training and educational activities. Getting Around the Ships This year&#39;s summer months will see an unprecedented movement of sailing vessels in American waters. US vessels will be venturing further than usual from their homeports to participate in quincentenary

parades of sail and to meet their international counterparts. The brig Niagara of Erie PA will make her first sortie out of the Great Lakes since her restoration. Expect to see her in Washington DC, June 11-14, AnnapolisMD, June 18-21 , andPhiladelphia, June 25-28, before arriving in New YorkonJuly 1 forOpSail. Thereafter, she will make stops all along the East Coast, including Sail Boston, returning via the St. Lawrence to Erie by late August. In Pacific waters, the Nautical Heritage Society&#39;s 19th-century revenue cutter replica Californian will sail out of San Francisco May 11 for Hawaii, before making a passage to Vancouver and

Seattle for joint sail training cruises with schooners Zodiac and Robertson II. Another vessel providing opportunities for on-the-water encounters with the international sail training fleet is the full-rigged ship HMS Rose. She will be among the Grand Regatta fleet when it reaches San Juan and will board trainee/ participants May through July on a dayrate basis. After the AST A rally in Newport, July 11-16, she will depart for San Francisco or possi bly Liverpool. Also accompanying the Grand Regatta fleet will be the 110-ft schooner Harvey Gamage which is offering an educational cruise for high school girl s departing Bar Harbor ME June 21, and also ending in Newport. The big Polish full-rigged ship Dar Mlodziezy (357-ft LOA) will be visiting the US and Canada this year with the enviable sponsorship of Cutty Sark Whisky, the long time sponsor of the European tall ship races. Missed this year at Op Sail will be square topsail schooner Anne Khristine, lost October 28 about 200 miles off the Carolinas to the 100-mile per hour winds of Hurricane Grace. Khristine had departed New York four days earlier for Bermuda. All the crew were rescued from the vessel, which was swamped in 40- to 50-ftseas.Builtin 1868asajakt,she was engaged in the same trade as her surviving SEA HISTORY 61 , SPRING 1992