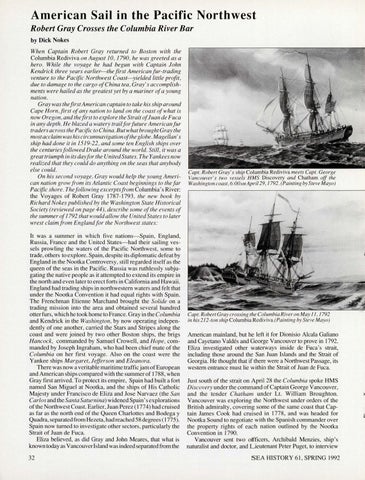 American Sail in the Pacific Northwest Robert Gray Crosses the Columbia River Bar by Dick Nokes When Captain Robert Gray returned to Boston with the Columbia Rediviva on August 10, 1790, he was greeted as a hero. While the voyage he had begun with Captain John Kendrick three years earlier--thefirst American fur-trading venture to the Pacific Northwest Coast-yielded little profit, due to damage to the cargo of China tea, Gray&#39;s accomplishments were hailed as the greatest yet by a mariner of a young nation. Gray was the first American captain to take his ship around Cape H orn,first of any nation to land on the coast of what is now Oregon, and the first to explore the Strait ofJuan de Fuca in any depth. He blazed a watery trail for future American fur traders across the Pacific to China. But what brought Gray the most acclaim was his circumnavigation ofthe globe. Magellan&#39;s ship had done it in 1519-22, and some ten English ships over the centuries followed Drake around the world. Still, it was a great triumph in its day for the United States. The Yankees now realized that they could do anything on the seas that anybody else could. On his second voyage, Gray would help the young American nation grow from its Atlantic Coast beginnings to the far Pacific shore. The following excnptsfrom Columbia &#39;s River: the Voyages of Robert Gray 1787-1793 , the new book by Richard Nokes published by the Washington State Historical Society (reviewed on page 44), describe some of the events of the summer of 1792 that would allow the United States to later wrest claim from England for the Northwest states: It was a summer in which five nations-Spain, England, Russ ia, France and the United States- had their sailing vessels prowling the waters of the Pacific Northwest, some to trade, others to explore. Spain, despite its diplomatic defeat by England in the Nootka Controversy, still regarded itself as the queen of the seas in the Pacific. Russia was ruthlessly subjugating the native people as it attempted to extend its empire in the north and even later to erect forts in California and Hawaii. England had trading ships in northwestern waters and felt that under the Nootka Convention it had equal rights with Spain. The Frenchman Etienne Marchand brought the Solide on a trading mi ssion into the area and obtained several hundred otter furs, which he took home to France. Gray in the Columbia and Kendrick in the Washington, by now operating independently of one another, carried the Stars and Stripes along the coast and were joined by two other Boston ships, the brigs Hancock, commanded by Samuel Crowell, and Hope, commanded by Joseph Ingraham , who had been chief mate of the Columbia on her first voyage. Also on the coast were the Yankee ships Margaret, Jefferson and Eleanora. There was now a veritable maritime traffic jam of European and American ships compared with the summerof 1788, when Gray first arrived. To protect its empire, Spain had built a fort named San Miguel at Nootka, and the ships of His Catholic Majesty under Francisco de Eliza and Jose Narvaez (the San Carlos and the Santa Saturnina) widened Spain &#39;s explorations of the Northwest Coast. Earlier, Juan Perez (1774) had cruised as far as the north end of the Queen Charlottes and Bodega y Quadra, separated from Hezeta, had reached 58 degrees (1775). Spain now turned to investigate other sectors, particularly the Strait of Juan de Fuca. Eliza believed, as did Gray and John Meares, that what is known today as Vancouver Island was indeed separated from the 32

American mainland, but he left it for Dionisio Alcala Galiano and Cayetano Valdes and George Vancouverto prove in 1792. Eliza investigated other waterways inside de Fuca&#39;s strait, including those around the San Juan Islands and the Strait of Georgia. He thought that if there were a Northwest Passage, its western entrance must lie within the Strait of Juan de Fuca. Just south of the strait on April 28 the Columbia spoke HMS Discovery under the command of Captain George Vancouver, and the tender Chatham under Lt. William Broughton. Vancouver was exploring the Northwest under orders of the British admiralty, covering some of the same coast that Captain James Cook had cruised in 1778 , and was headed for Nootka Sound to negotiate with the Spanish commander over the property rights of each nation outlined by the Nootka Convention in 1790. Vancouver sent two offficers, Archibald Menzies, ship&#39;s naturalist and doctor, and Lieutenant Peter Puget, to interview SEA HISTORY 61, SPRING 1992