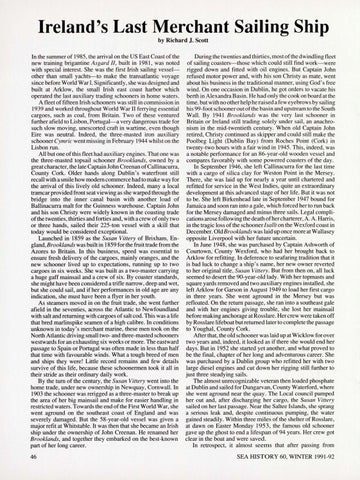 In the summer of 1985, the arrival on the US East Coast of the new training brigantine Asgard If, built in 1981, was noted with special interest. She was the first Irish sailing vesselother than small yachts-to make the transatlantic voyage since before World War I. Significantly, she was designed and built at Arklow, the small Irish east coast harbor which operated the last auxiliary trading schooners in home waters. A fleet of fifteen Irish schooners was still in commission in 1939 and worked throughout World War II ferrying essential cargoes, such as coal, from Britain. Two of these ventured further afield to Lisbon, Portugal-a very dangerous trade for such slow moving, unescorted craft in wartime, even though Eire was neutral. Indeed, the three-masted iron auxiliary schooner Cymric went missing in February 1944 whilst on the Lisbon run. All but one of this fleet had auxiliary engines. That one was the three-masted topsail schooner Brooklands, owned by a great character, the late Captain John Creenan of Callinacurra, County Cork. Older hands along Dublin&#39;s waterfront still recall with a smile how modem commerce had to make way for the arrival of this lively old schooner. Indeed, many a local tramcar provided front seat viewing as she warped through the bridge into the inner canal basin with another load of Ballinacurra malt for the Guinness warehouse. Captain John and his son Christy were widely known in the coasting trade of the twenties, thirties and forties and, with a crew of only two or three hands, sailed their 225-ton vessel with a skill that today would be considered exceptional. Launched in 1859 as the Susan Vittery of Brixham, England, Brooklands was built in 1859 for the fruit trade from the Azores to Britain. In this business, speed was essential to ensure fresh delivery of the cargoes, mainly oranges, and the new schooner lived up to expectations, running up to two cargoes in six weeks. She was built as a two-master carrying a huge gaff mainsail and a crew of six. By coaster standards, she might have been considered a trifle narrow, deep and wet, but she could sail, and if her performances in old age are any indication, she must have been a flyer in her youth. As steamers moved in on the fruit trade, she went further afield in the seventies, across the Atlantic to Newfoundland with salt and returning with cargoes of salt cod. This was a life that bred marlinspike seamen of a high calibre. In conditions unknown in today&#39;s merchant marine, these men took on the North Atlantic driving small two- and three-masted schooners westwards for an exhausting six weeks or more. The eastward passage to Spain or Portugal was often made in less than half that time with favourable winds. What a tough breed of men and ships they were! Little record remains and few details survive of this life, because these schoonermen took it all in their stride as their ordinary daily work. By the tum of the century, the Susan Vittery went into the home trade, under new ownership in Newquay, Cornwall. In 1903 the schooner was rerigged as a three-master to break up the area of her big mainsail and make for easier handling in restricted waters. Towards the end of the First World War, she went aground on the southeast coast of England and was severely damaged. But the 58-year-old vessel was given a major refit at Whitstable. It was then that she became an Irish ship under the ownership of John Creenan. He renamed her Brooklands, and together they embarked on the best-known part of her long career. 46

During the twenties and thirties, most of the dwindling fleet of sailing coasters-those which could still find work-were rigged down and fitted with oil engines. But Captain John refused motor power and, with his son Christy as mate, went about his business in the traditional manner, using God &#39;s free wind. On one occasion in Dublin, he got orders to vacate his berth in Alexandra Basin. He had only the cook on board at the time, but with no other help he raised a few eyebrows by sailing his 99-foot schooner out of the basin and upstream to the South Wall. By 1941 Brooklands was the very last schooner in Britain or Ireland still trading solely under sail , an anachronism in the mid-twentieth century. When old Captain John retired, Christy continued as skipper and could still make the Poolbeg Light (Dublin Bay) from Roches Point (Cork) in twenty-two hours with a fair wind in 1945. This, indeed, was a notable performance for an 86-year-old wooden vessel and compares favorably with some powered coasters of the day. In September 1946, she left Callinacurra for the last time with a cargo of silica clay for Weston Point in the Mersey. There, she was laid up for nearly a year until chartered and refitted for service in the West Indies, quite an extraordinary development at this advanced stage of her life. But it was not to be. She left Birkenhead late in September 1947 bound for Jamaica and soon ran into a gale, which forced her to run back for the Mersey damaged and minus three sails. Legal complications arose following the death of her charterer, A. A. Harris, in the tragic loss of the schooner I sallt on the Wexford coast in December. Old Brooklands was laid up once more at Wallasey opposite Liverpool with her future uncertain. In June 1948, she was purchased by Captain Ashworth of Courtown, County Wexford, who had her brought back to Arklow for refitting. In deference to seafaring tradition that it is bad luck to change a ship&#39; s name, her new owner reverted to her original title, Susan Vittery. But from then on, all luck seemed to desert the 90-year-old lady. With tier topmasts and square yards removed and two auxiliary engines installed, she left Arklow for Garson in August 1949 to load her first cargo in three years. She went aground in the Mersey but was refloated. On the return passage, she ran into a southeast gale and with her engines giving trouble, she lost her mainsail before making anchorage at Rosslare. Her crew were taken off by Rosslare lifeboat but returned later to complete the passage to Y oughal, County Cork. After that, the old schooner was laid up at Wicklow for over two years and, indeed, it looked as if there she would end her days. But in 1952 she started yet another, and what proved to be the final , chapter of her long and adventurous career. She was purchased by a Dublin group who refitted her with two large diesel engines and cut down her rigging still further to just three steadying sails. The almost unrecognizable veteran then loaded phosphate at Dublin and sailed for Dungarvan, County Waterford, where she went aground near the quay . The Local council pumped her out and , after discharging her cargo, the Susan Vittery sailed on her last passage. Near the Saltee Islands, she sprang a serious leak and, despite continuous pumping, the water gained steadily. Within three miles of the shelter ofRosslare, at dawn on Easter Monday 1953, the famous old schooner gave up the ghost to end a lifespan of 94 years. Her crew got clear in the boat and were saved. In retrospect, it almost seems that after passing from SEA HISTORY 60, WINTER 1991-92