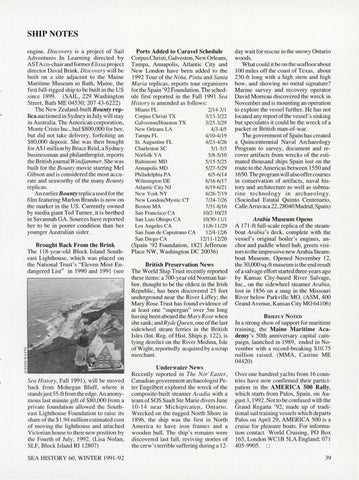 SHIP NOTES engine. Discovery is a project of Sail Adventures In Learning directed by ASTA co-chair and former Elissa project director David Brink. Discovery will be built on a site adjacent to the Maine Maritime Museum in Bath, Maine, the first full-rigged ship to be built in the US since 1899. (SAIL, 229 Washington Street, Bath ME 04530; 207 43-6222) The New Zealand-built Bounty replica auctioned in Sydney in July will stay in Australia. The American corporation, Monte Cristo Inc., bid $800,000 for her, but did not take delivery, forfeiting an $80,000 deposit. She was then bought for A$1 million by Bruce Reid, a Sydney businessman and philanthropist, reports theBritishjournal Windjammer. She was built for the Bounty movie starring Mel Gibson and is considered the most accurate and seaworthy of the many Bounty replicas. An earlier Bounty rep 1ica used for the film featuring Marlon Brando is now on the market in the US. Currently owned by media giant Ted Turner, it is berthed in Savannah GA. Sources have reported her to be in poorer condition than her younger Australian sister. Brought Back From the Brink The 118-year-old Block Island Southeast Lighthouse, which was placed on the National Trust&#39;s &quot;Eleven Most Endangered List&quot; in 1990 and 1991 (see

Sea History, Fall 1991), will be moved back from Mohegan Bluff, where it stands just55-ftfrom the edge. An anonymous last minute gift of $80,000 from a private foundation allowed the Southeast Lighthouse Foundation to raise its share of the $1.94 million estimated cost of moving the lighthouse and attached Victorian house to their new position by the Fourth of July, 1992. (Lisa Nolan, SLF, Block Island RI 12807) SEA HISTORY 60, WINTER 1991-92

day wait for rescue in the snowy Ontario woods. What could it be on the seafloor about 100 miles off the coast of Texas, about 230-ft long with a high stem and high bow, and showing no metal signature? Marine survey and recovery operator David Morreau discovered the wreck in November and is mounting an operation to explore the vessel further. He has not located any report of the vessel&#39;s sinking but speculates it could be the wreck of a packet or British man-of-war. The government of Spain has created a Quincentennial Naval Archaeology Program to survey, document and recover artifacts from wrecks of the estimated thousand ships Spain lost on the route to the Americas between 1550 and 1650. The program will also offer courses in conservation of artifacts, naval history and architecture as well as submarine technology in archaeology. (Sociedad Estatal Quinto Centenario, Calle Arravaca 22, 28040 Madrid, Spain)

In a strong show of support for maritime training, the Maine Maritime Academy&#39;s 50th anniversary capital campaign, launched in 1989, ended in November with a record-breaking $10.75 million raised. (MMA, Castine ME 04420) Over one hundred yachts from 16 countries have now confirmed their participation in the AMERICA 500 Rally, which starts from Palos, Spain, on August 3, 1992. Not to be confused with the Grand Regatta &#39;92, made up of traditional sail training vessels which departs Palos on April 29, AMERICA 500 is a cruise for pleasure boats. For information contact World Cruising, PO Box 165, London WClB 5LA England; 071 405-9905. D 39