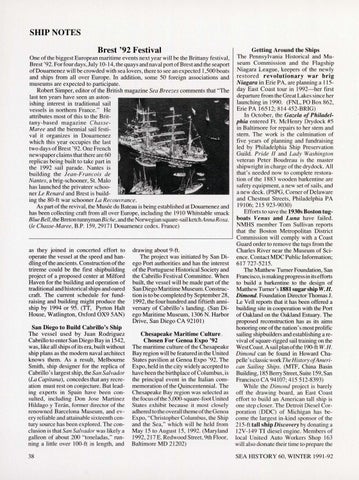 SHIP NOTES Brest &#39;92 Festival One of the biggest European maritime events next year will be the Brittany festival, Brest &#39;92. For four days, July 10-14, the quays and naval port of Brest and the seaport ofDouamenez will be crowded with sea lovers, there to see an expected 1,500 boats and ships from all over Europe. In addition, some 50 foreign associations and museums are expected to participate. Robert Simper, editor of the British magazine Sea Breezes comments that &quot;The last ten years have seen an astonishing interest in traditional sail vessels in northern France.&quot; He attributes most of this to the Brittany-based magazine ChasseMaree and the biennial sail festival it organizes in Douamenez which this year occupies the last two days of Brest &#39;92. One French newspaper claims that there are 60 replicas being built to take part in the 1992 sail parade. Nantes is building the I ean-Francois de Nantes, a brig-schooner, St. Malo has launched the privateer schooner Le Renard and Brest is building the 80-ft war schooner La Recouvrance. As part of the revival, the Musee du Bateau is being established at Douamenez and has been collecting craft from all over Europe, including the 1910 Whitstable smack Blue Bell, the Breton tunnyman Biche, and the Norwegian square-sail ketchAnnaRosa. (le Chasse-Maree, B.P. 159, 29171 Douamenez cedex. France)

as they joined in concerted effort to operate the vessel at the speed and handling of the ancients. Construction of the trireme could be the first shipbuilding project of a proposed center at Milford Haven for the building and operation of traditional and historical ships and oared craft. The current schedule for fundraising and building might produce the ship by 1994 or 95. (TT, Pyrton Halt House, Watlington, Oxford OX9 SAN) San Diego to Build CabriIJo&#39;s Ship The vessel used by Juan Rodriguez Cabrillo to enter San Diego Bay in 1542, was, like all ships of its era, built without ship plans as the modern naval architect knows them. As a result, Melbourne Smith, ship designer for the replica of Cabrillo&#39; s largest ship, the San Salvador (La Capitana), concedes that any recreation must rest on conjecture. But leading experts in Spain have been consulted, including Don Jose Martinez Hildago y Teran, former director of the renowned Barcelona Museum, and every reliable and attainable sixteenth century source has been explored. The conclusion is that San Salvador was I ikely a galleon of about 200 &quot;toneladas,&quot; running a little over 100-ft in length, and 38

drawing about 9-ft. The project was initiated by San Diego Port authorities and has the interest of the Portuguese Historical Society and the Cabrillo Festival Committee. When built, the vessel will be made part of the San Diego Maritime Museum. Construction is to be completed by September28, 1992, the four hundred and fiftieth anniversary of Cabrillo&#39;s landing. (San Diego Maritime Museum, 1306 N. Harbor Drive, San Diego CA 92101) Chesapeake Maritime Culture , Chosen For Genoa Expo &#39;92 The maritime culture of the Chesapeake Bay region will be featured in the United States pavilion at Genoa Expo &#39;92. The Expo, held in the city widely accepted to have been the birthplace of Columbus, is the principal event in the Italian commemoration of the Quin centennial. The Chesapeake Bay region was selected as the focus of the 5,000-square-foot United States exhibit because it most closely adhered to the overal I theme of the Genoa Expo, &quot;Christopher Columbus, the Ship and the Sea,&quot; which will be held from May 15 to August 15, 1992. (Maryland 1992, 217 E. Redwood Street, 9th Floor, Baltimore MD 21202)

Getting Around the Ships The Pennsylvania Historical and Museum Commission and the Flagship Niagara League, keepers of the newly restored revolutionary war brig Niagara in Erie PA, are planning a 115day East Coast tour in 1992-her first departure from the Great Lakes since her launching in 1990. (FNL, PO Box 862, Erie PA 16512; 814 452-BRIG) In October, the Gaze/a of Philadelphia entered Ft. McHenry Drydock #5 in Baltimore for repairs to her stem and stem. The work is the culmination of five years of planning and fundraising led by Philadelphia Ship Preservation Guild. Pride II and Lady Washington veteran Peter Boudreau is the master shipwright in charge of the drydock. All that &#39;s needed now to complete restoration of the 1883 wooden barkentine are safety equipment, a new set of sails, and a new deck. (PSPG, Comer of Delaware and Chestnut Streets, Philadelphia PA 19106; 215 923-9030) Efforts to save the 1930s Boston tugboats Venus and Luna have failed. NMHS member Tom Sullivan reports that the Boston Metropolitan District Commission will comply with a Coast Guard order to remove the tugs from the Charles River near the Museum of Science. Contact MDC Public Information; 617 727-5215. The Matthew Turner Foundation, San Francisco, is making progress in its efforts to build a barkentine to the design of Matthew Turner&#39;s 1881 sugar ship W. H. Dimond. Foundation Director Thomas J. Le Yell reports that it has been offered a building site in cooperation with the Port of Oakland on the Oakland Estuary. The proposed reconstruction has as its aims honoring one of the nation&#39;s most prolific sailing shipbuilders and establishing a revival of square-rigged sail training on the WestCoast. Asailplanofthe 190-ft W.H. Dimond can be found in Howard Chapelle&#39; s classic work The History ofAmerican Sailing Ships. (MTF, China Basin Building, 185 Berry Street, Suite 159, San Francisco CA 94107; 415 512-8393) While the Dimond project is barely off the drawing board, an East Coast effort to build an American tall ship is one step closer. The Detroit Diesel Corporation (DDC) of Michigan has become the largest in-kind sponsor of the 215-ft tall ship Discovery by donating a 12V-149 TI diesel engine. Members of local United Auto Workers Shop 163 will also donate their time to prepare the SEA HISTORY 60, WINTER 1991-92