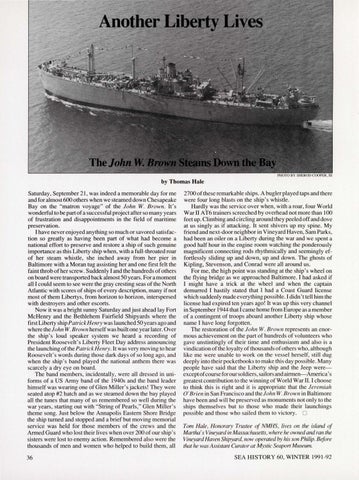 by Thomas Hale Saturday, September 21, was indeed a memorable day for me and for almost 600 others when we steamed down Chesapeake Bay on the &quot;matron voyage&quot; of the John W. Brown. It&#39; s wonderful to be part of a successful project after so many years of frustration and disappointments in the field of maritime preservation. I have never enjoyed anything so much or savored satisfaction so greatly as having been part of what had become a national effort to preserve and restore a ship of such genuine importance as this Liberty ship when, with a full-throated roar of her steam whistle, she inched away from her pier in Baltimore with a Moran tug assisting her and one first felt the faint throb of her screw. Suddenly I and the hundreds of others on board were transported back almost 50 years. For a moment all I could seem to see were the gray cresting seas of the North Atlantic with scores of ships of every description, many if not most of them Libertys, from horizon to horizon, interspersed with destroyers and other escorts. Now it was a bright sunny Saturday and just ahead lay Fort McHenry and the Bethlehem Fairfield Shipyards where the first Liberty ship Patrick Henry was launched 50 years ago and where the John W. Brown herself was built one year later. Over the ship &#39;s loud speaker system we heard a recording of President Roosevelt&#39;s Liberty Fleet Day address announcing the launching ofthePatrickHenry. It was very moving to hear Roosevelt&#39;s words during those dark days of so long ago, and when the ship &#39;s band played the national anthem there was scarcely a dry eye on board. The band members, incidentally, were all dressed in uniforms of a US Army band of the 1940s and the band leader himself was wearing one of Glen Miller&#39;s jackets! They were seated atop #2 hatch and as we steamed down the bay played all the tunes that many of us remembered so well during the war years, starting out with &quot;String of Pearls,&quot; Glen Miller&#39;s theme song. Just below the Annapolis Eastern Shore Bridge the ship turned and stopped and a brief but moving memorial service was held for those members of the crews and the Armed Guard who lost their lives when over 200 of our ship &#39;s sisters were lost to enemy action. Remembered also were the thousands of men and women who helped to build them, all 36

2700 of these remarkable ships. A bugler played taps and there were four long blasts on the ship &#39;s whistle. Hardly was the service over when, with a roar, four World War II AT6 trainers screeched by overhead not more than 100 feet up. Climbing and circling around they peeled off and dove at us singly as if attacking. It sent shivers up my spine. My friend and next-door neighbor in Vineyard Haven, Sam Parks, had been an oiler on a Liberty during the war and we spent a good half hour in the engine room watching the ponderously magnificent connecting rods rhythmically and seemingly effortlessly sliding up and down, up and down. The ghosts of Kipling, Stevenson, and Conrad were all around us. For me, the high point was standing at the ship &#39;s wheel on the flying bridge as we approached Baltimore. I had asked if I might have a trick at the wheel and when the captain demurred I hastily stated that I had a Coast Guard license which suddenly made everything possible. I didn &#39; t tell him the license had expired ten years ago! It was up this very channel in September 1944 that I came home from Europe as a member of a contingent of troops aboard another Liberty ship whose name I have long forgotten. The restoration of the John W . Brown represents an enormous achievement on the part of hundreds of volunteers who gave unstintingly of their time and enthusiasm and also is a vindication of the loyalty of thousands of others who, although like me were unable to work on the vessel herself, still dug deeply into their pocketbooks to make this day possible. Many people have said that the Liberty ship and the Jeep wereexcept of course for our soldiers, sailors and airmen-America&#39;s greatest contribution to the winning of World War IL I choose to think this is right and it is appropriate that the Jeremiah 0 &#39; Brien in San Francisco and theJohn W. Brown in Baltimore have been and will be preserved as monuments not only to the ships themselves but to those who made their launchings possible and those who sailed them to victory. D Tom Hale, Honorary Trustee of NMHS , lives on the island of Martha&#39;s Vineyard in Massachusetts, where he owned and ran the Vineyard Haven Shipyard, now operated by his son Philip. Before that he was Assistant Curator at Mystic Seaport Museum.