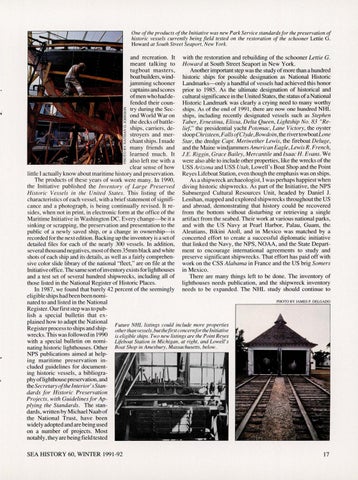 One of the products of the Initiative was new Park Service standards for the preservation of historic vessels currently being field tested on the restoration of the schooner Lettie G. Howard at South Street Seaport, New York.

and recreation. It with the restoration and rebuilding of the schooner Lettie G. meant talking to Howard at South Street Seaport in New York. tugboat masters, Another important step was the study of more than a hundred boat builders, wind- historic ships for possible designation as National Historic jamming schooner Landmarks-only a handful of vessels had achieved this honor captains and scores prior to 1985. As the ultimate designation of historical and of men who had de- cultural significance in the United States, the status of a National fended their coun- Historic Landmark was clearly a crying need to many worthy 6 try during the Sec- ships. As of the end of 1991 , there are now one hundred NHL ships, including recently designated vessels such as Stephen ~ ond World Waron 2 the decks of battle- Taber, Ernestina, Elissa, Delta Queen, Lightship No. 83 &quot;Re~ ships, carriers, de- lief,&quot; the presidential yacht Potomac, Lane Victory, the oyster ~ stroyers and mersloopChristeen,FallsofClyde,Bowdoin,therivertowboatLone fStar, the dredge Capt. Meriwether Lewis, the fireboat Deluge, ~ chant ships. I made and the Maine windjammers American Eagle, Lewis R. French, ~ many friends and learned much. It I.E. Riggin, Grace Bailey, Mercantile and Isaac H. Evans. We g: also left me with a were also able to include other properties, like the wrecks of the clear sense of how USS Arizona and USS Utah, Lowell&#39;s Boat Shop and the Point little I actually know about maritime history and preservation. Reyes Lifeboat Station, even though the emphasis was on ships. The products of these years of work were many. In 1990, As a shipwreck archaeologist, I was perhaps happiest when the Initiative published the Inventory of Large Preserved diving historic shipwrecks. As part of the Initiative, the NPS Historic Vessels in the United States. This listing of the Submerged Cultural Resources Unit, headed by Daniel J. characteristics of each vessel, with a brief statement of signifi- Lenihan, mapped and explored shipwrecks throughout the US cance and a photograph, is being continually revised. It re- and abroad, demonstrating that history could be recovered sides, when not in print, in electronic form at the office of the from the bottom without disturbing or retrieving a single Maritime Initiative in Washington DC. Every change-be it a artifact from the seabed. Their work at various national parks, sinking or scrapping, the preservation and presentation to the and with the US Navy at Pearl Harbor, Palau, Guam, the. public of a newly saved ship, or a change in ownership--is Aleutians, Bikini Atoll, and in Mexico was matched by a recorded for the next edition. Backing up the inventory is a set of concerted effort to create a successful diplomatic initiative detailed files for each of the nearly 300 vessels. In addition, that linked the Navy, the NPS , NOAA, and the State Departseveral thousand negatives, most of them 35mm black and white ment to encourage international agreements to study and shots of each ship and its details, as well as a fairly comprehen- preserve significant shipwrecks. That effort has paid off with sive color slide library of the national &quot;fleet,&quot; are on file at the work on the CSS Alabama in France and the US brig Somers Initiative office. The same sortofinventory exists for lighthouses in Mexico. There are many things left to be done. The inventory of and a test set of several hundred shipwrecks, including all of lighthouses needs publication, and the shipwreck inventory those listed in the National Register of Historic Places. In 1987, we found that barely 42 percent of the seemingly needs to be expanded. The NHL study should continue to eligible ships had been been nomiPHOTO BY JAMES P. DELGADO nated to and listed in the National Register. Our first step was to publish a special bulletin that explained how to adapt the National Future NHL listings could include more properties Register process to ships and ship- other than vessels, but thefirst concernfor the Initiative wrecks. This was followed in 1990 is eligible ships. Two new listings are the Point Reyes with a special bulletin on nomi- Lifeboat Station in Michigan, at right, and Lowell&#39;s nating historic lighthouses. Other Boat Shop in Amesbury, Massachusetts, below. NPS publications aimed at helping maritime preservation included guidelines for documenting historic vessels, a bibliography oflighthouse preservation, and theSecretaryofthe Interior&#39; sStandards for Historic Preservation Projects, with Guidelines for Applying the Standards. The standards, written by Michael Naab of the National Trust, have been widely adopted and are being used on a number of projects. Most notably, they are being field tested