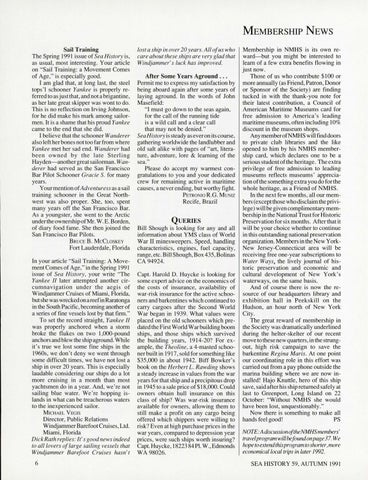 MEMBERSHIP NEWS Sail Training The Spring 1991 issue of Sea History is, as usual, most interesting. Your article on &quot;Sail Training: a Movement Comes of Age,&quot; is especially good. I am glad that, at long last, the steel tops &#39;I schooner Yankee is properly referred to as just that, and not a brigantine, as her late great skipper was wont to do. This is no reflection on Irving Johnson, for he did make his mark among sailormen. It is a shame that his proud Yankee came to the end that she did. I believe that the schooner Wanderer also left her bones not too far from where Yankee met her sad end. Wanderer had been owned by the late Sterling Hayden-another great sailorman. Wanderer had served as the San Francisco Bar Pilot Schooner Gracie S. for many years. Your mention of Adventuress as a sail training schooner in the Great Northwest was also proper. She, too, spent many years off the San Francisco Bar. As a youngster, she went to the Arctic underthe ownership of Mr. W. E. Borden, of diary food fame. She then joined the San Francisco Bar Pilots. BRUCE B. MCCLOSKEY Fort Lauderdale, Florida In your article &quot;Sail Training: A Movement Comes of Age,&quot; in the Spring 1991 issue of Sea History , your write &quot;The Yankee II later attempted another circumnavigation under the aegis of Windjammer Cruises of Miami, Florida, but she was wrecked on a reef in Raratonga in the South Pacific, becoming another of a series of fine vessels lost by that firm.&quot; To set the record straight, Yankee II was properly anchored when a storm broke the flukes on two 1,000-pound anchors and blew the ship aground. While it&#39; s true we lost some fine ships in the 1960s, we don &#39;t deny we went through some difficult times, we have not lost a ship in over 20 years. This is especially laudable considering our ships do a lot more cruising in a month than most yachtsmen do in a year. And, we&#39;re not sailing blue water. We&#39;re hopping islands in what can be treacherous waters to the inexperienced sailor. MICHAEL VEGIS

lost a ship in over 20 years. All of us who care about these ships are very glad that Windjammer&#39; s luck has improved.

After Some Years Aground ... Permit me to express my satisfaction by being aboard again after some years of laying aground. In the words of John Masefield: &quot;I must go down to the seas again, for the call of the running tide is a wild call and a clear call that may not be denied.&quot; Sea History is steady as everon its course, gathering worldwide the landlubber and old salt alike with pages of &quot;art, literature, adventure, lore &amp; learning of the sea.&quot; Please do accept my warmest congratulations to you and your dedicated crew for remaining active in maritime causes, a never ending, but worthy fight. PETRONIO R.G. MUNIZ Recife, Brazil QUERIES Bill Shough is looking for any and all information about YMS class of World War II minesweepers. Speed, handling characteristics, engines, fuel capacity, range, etc. Bill Shough, Box 435, Bolinas CA 94924. Capt. Harold D. Huycke is looking for some expert advice on the economics of the costs of insurance, availability of war-risk insurance for the active schooners and barkentines which continued to carry cargoes after the Second World War began in 1939. What values were placed on the old schooners which predated the First World War building boom ships, and those ships which survived the building years, 1914-20? For example, the Theoline, a 4-masted schooner built in 1917, sold for something like $35 ,000 in about 1942. Biff Bowker&#39;s book on the Herbert L. Rawding shows a steady increase in values from the war years for that ship and a precipitous drop in 1945 to a sale price of $18,000. Could owners obtain hull insurance on this class of ship? Was war-risk insurance available for owners, allowing them to still make a profit on any cargo being offered which shippers were willing to risk? Even at high purchase prices in the war years, compared to depression year prices, were such ships worth insuring? Capt. Huycke, 18223 84 Pl. W., Edmonds WA 98026.

Membership in NMHS is its own reward-but you might be interested to learn of a few extra benefits flowing in just now. Those of us who contribute $100 or more annually (as Friend, Patron, Donor or Sponsor of the Society) are finding tucked in with the thank-you note for their latest contribution, a Council of American Maritime Museums card for free admission to America&#39;s leading maritime museums, often including 10% discount in the museum shops. Any memberofNMHS will find doors to private club libraries and the like opened to him by his NMHS membership card, which declares one to be a serious student of the heritage. The extra privilege of free admission to leading museums reflects museums&#39; appreciation of the something extra you do for the whole heritage, as a Friend of NMHS. In the next few months, all our members (exceptthose who disclaim the privilege) will be given complimentary membership in the National Trust for Historic Preservation for six months. After that it will be your choice whether to continue in this outstanding national preservation organization. Members in the New YorkNew Jersey-Connecticut area will be receiving free one-year subscriptions to Water Ways, the lively journal of historic preservation and economic and cultural development of New York&#39;s waterways, on the same basis. And of course there is now the resource of our headquarters library and exhibition hall in Peekskill on the Hudson, an hour north of New York City. The great reward of membership in the Society was dramatically underlined during the helter-skelter of our recent move to these new quarters, in the strungout, high risk campaign to save the barkentine Regina Maris. At one point our coordinating role in this effort was carried out from a pay phone outside the marina building where we are now installed! Hajo Knuttle, hero of this ship save, said after his ship returned safely at last to Greenport, Long Island on 22 October: &quot;Without NMHS she would have been lost, unquestionably.&quot; Now there is something to make all hands feel good! PS NOTE:AdiscussionoftheNMHSmembers&#39; travel program will befound on page 37. We hope to extend this program to shorter, more economical local trips in later 1992.