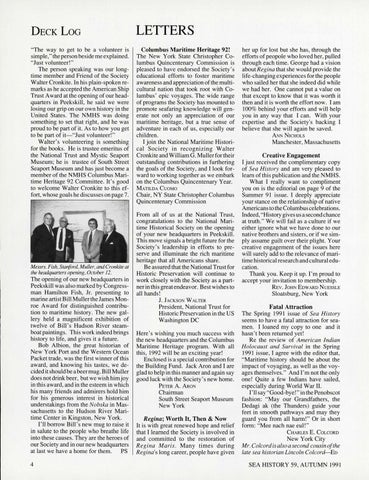 DECK LOG "The way to get to be a volunteer is simple,"theperson beside me explained. "Just volunteer!" The person speaking was our longtime member and Friend of the Society Walter Cronkite. In his plain-spoken remarks as he accepted the American Ship Trust A ward at the opening of our headquarters in Peekski ll , he said we were losing our grip on our own history in the United States. The NMHS was doing something to set that right, and he was proud to be part of it. As to how you get to be part of it-"Just volunteer!" Walter' s volunteering is something for the books. He is trustee emeritus of the National Trust and Mystic Seaport Museum; he is trustee of South Street Seaport Museum and has just become a member of the NMHS Columbus Maritime Heritage 92 Committee. It's good to welcome Walter Cronkite to this effort, whose goals he discusses on page 7.

The opening of our new headquarters in Peekskill was also marked by Congressman Hamilton Fish, Jr. presenting to marine artist Bill Muller the James Monroe Award for distinguished contribution to maritime history. The new gallery held a magnificent exhibition of twelve of Bill 's Hudson River steamboat paintings. This work indeed brings history to life, and gives it a future . Bob Albion, the great historian of New York Port and the Western Ocean Packet trade, was the first winner of this award, and knowing his tastes, we decided it should be a beer mug . Bill Muller does not drink beer, but we wish him joy in this award, and in the esteem in which his many friends and admirers hold him for his generous interest in historical understakings from the Nobska in Massachusetts to the Hudson River Maritime Center in Kingston, New York. I'll borrow Bill's new mug to raise it in salute to the people who breathe life into these causes. They are the heroes of our Society and in our new headquarters at last we have a home for them. PS 4

LETTERS Columbus Maritime Heritage 92! The New York State Christopher Columbus Quincentenary Commission is pleased to have endorsed the Society's educational efforts to foster maritime awareness and appreciation of the multicultural nation that took root with Columbus ' epic voyages. The wide range of programs the Society has mounted to promote seafaring knowledge will generate not only an appreciation of our maritime heritage, but a true sense of adventure in each of us , especially our children. I join the National Maritime Histori cal Society in recognizing Walter Cronkite and William G. Muller for their outstanding contributions in furthering the goals of the Society, and I look forward to working together as we embark on the Columbus Quincentenary Year. M ATILDA CUOMO

Chair, NY State Christopher Columbus Quincentenary Commission From all of us at the National Trust, congratulations to the National Maritime Historical Society on the opening of your new headquarters in Peekskill. This move signals a bright future for the Society 's leadership in efforts to preserve and illuminate the rich maritime heritage that all Americans share. Be assured that the National Trust for Hi storic Preservation will continue to work closely with the Society as a partner in this great endeavor. Best wishes to all hands!

her up for lost but she has, through the efforts of peopole who loved her, pulled through each time. George had a vision about Regina that she would provide the life-changing experiences for the people who sailed her that she indeed did while we had her. One cannot put a value on that except to know that it was worth it then and it is worth the effort now . I am 100% behind your efforts and will help you in any way that I can. With your expertise and the Society's backing I believe that she will again be saved. ANN NICHOLS

Creative Engagement I just received the complimentary copy of Sea History and am very pleased to learn of thi s publication and the NMHS . What I really want to compliment you on is the editorial on page 9 of the Summer 91 issue. I deeply appreciate your stance on the relationship of native Americans to the Columbus celebrations. Indeed, "History gives us a second chance at truth ." We will fail as a culture if we either ignore what we have done to our native brothers and sisters, or if we simply assume guilt over their plight. Your creative engagement of the issues here will surely add to the relevance of maritime historical research and cultural education. Thank you. Keep it up. I'm proud to accept your invitation to membership. REV. JoHN EDWARD N UESSLE

President, National Trust for Historic Preservation in the US Washington DC Here 's wishing you much success with the new headquarters and the Columbus Maritime Heritage program. With all this, 1992 will be an exciting year! Enclosed is a special contribution for the Building Fund. Jack Aron and I are glad to help in this manner and again say good luck with the Society 's new home. P ETER A. ARON

Chairman South Street Seaport Museum New York Regina; Worth It, Then & Now It is with great renewed hope and relief that I learned the Society is involved in and committed to the restoration of R egina Maris . Many times during Regina's long career, people have given

Fatal Attraction The Spring 1991 issue of Sea History seems to have a fatal attraction for seamen. I loaned my copy to one and it hasn' t been returned yet! Re the review of American Indian Holocaust and Survival in the Spring 1991 issue, I agree with the editor that, "Maritime history should be about the impact of voyaging, as well as the voyages themselves." And I'm not the only one! Quite a few Indians have sailed, especially during World War II. I'll say "Good-bye! " in the Penobscot fashion: "May our Grandfathers, the Dedagi ak (the Thunders) guide your feet in smooth pathways and may they guard you from all harm!" Or in short form: "Meenach nae eul! " CHARLES E . COLCORD